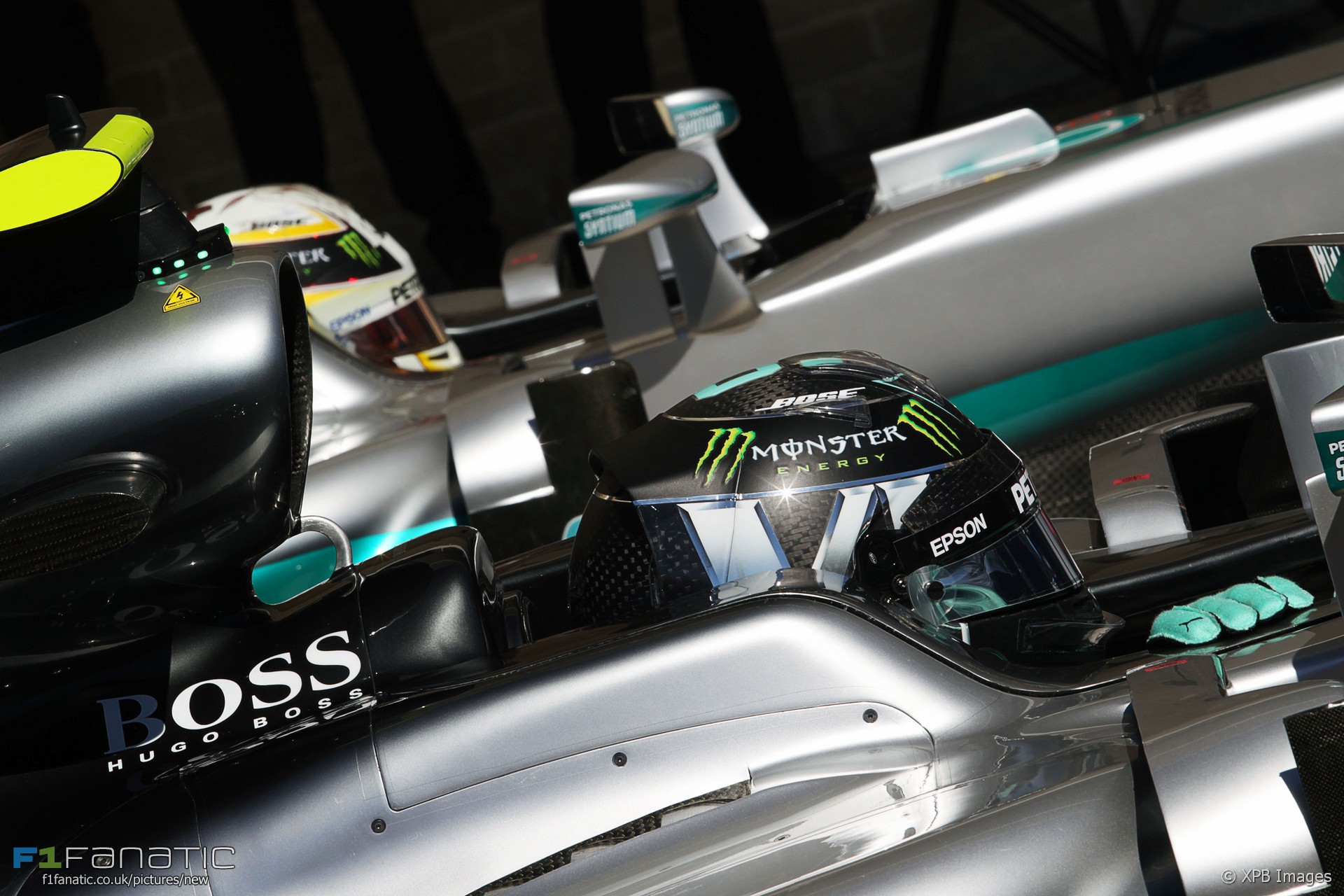 A split in tyre strategies between the front runners has added further intrigue to what already is a crucial race for the championship.

Lewis Hamilton badly needs to trim Nico Rosberg’s points lead this weekend. A Germany-style race where he takes the win while the Red Bull drivers separate him from Rosberg would make his title hopes much more realistic.

While the Mercedes drivers will start tomorrow’s race on the soft compound tyres the closest driver to them – Daniel Ricciardo – will have gripper super-softs on his Red Bull. The uphill climb to turn one is a brief 364 metres, so those Mercedes engines will have little chance to make their superior grunt tell against a quick-off-the-line Red Bull. On paper, Ricciardo stands a decent chance of muscling at least one of the silver cars aside.

“Yeah, that’s obviously the plan,” he said after qualifying. “We will see how tomorrow plays out. The track conditions changed quite a bit today so I think we’re going to have similar conditions tomorrow as we did today so that could have a bit of influence. We did look good yesterday.”

“I’m the only one, I think, on the first two rows that starts on the super-soft. Sure that tyre probably won’t last as long but it might give me a bit of an advantage at the start so we will see how it plays out and have some fun.”

Ricciardo used a starting tyre advantage to take the lead at Shanghai earlier this year, but on that occasion he had the benefit of starting from the front row. If he can get ahead, Red Bull’s ability to eke its tyres out and therefore tolerate earlier pit stops and take advantage of the ‘undercut’ gives him a hope of victory – albeit a slim one.

Red Bull have their options covered, however, with Max Verstappen starting on the soft tyres. Getting stuck behind him would be bad news for either of the Mercedes drivers, although part of Verstappen’s defensive armoury has just been stripped from him following the latest rules clarification from the FIA.

And Verstappen, of course, will have a pair of Ferraris starting immediately behind him on super-softs. We could see quite a concertina effect going into turn one at the start.

With Mercedes’ constructors’ trophy secure for another year and Hamilton desperate to score points, Rosberg can be as muscular as he likes in battle with his team mate. And he is well placed to give his team mate a dose of the medicine he got at turn one last year.

That’s assuming Hamilton gets a decent getaway, of course, which is not something that can be taken for granted. In the eight previous occasions he’s started from pole position this year he’s lost three lead five times, and on one of the three occasions he kept it that was only because the race started behind the Safety Car.

Rather like Red Bull, Force India will have two lines of attack covered in the race. Nico Hulkenberg will start in front of both Williams drivers.

Meanwhile Sergio Perez is the only one of the four who can start on new tyres, having failed to get into the top ten. That advantage plays perfectly into Perez’s hands – if anyone is going to be able to complete the race with one pit stop fewer than the rest it’s him.

How do you think the crucial start will unfold? Will Red Bull cause trouble for the Mercedes drivers?