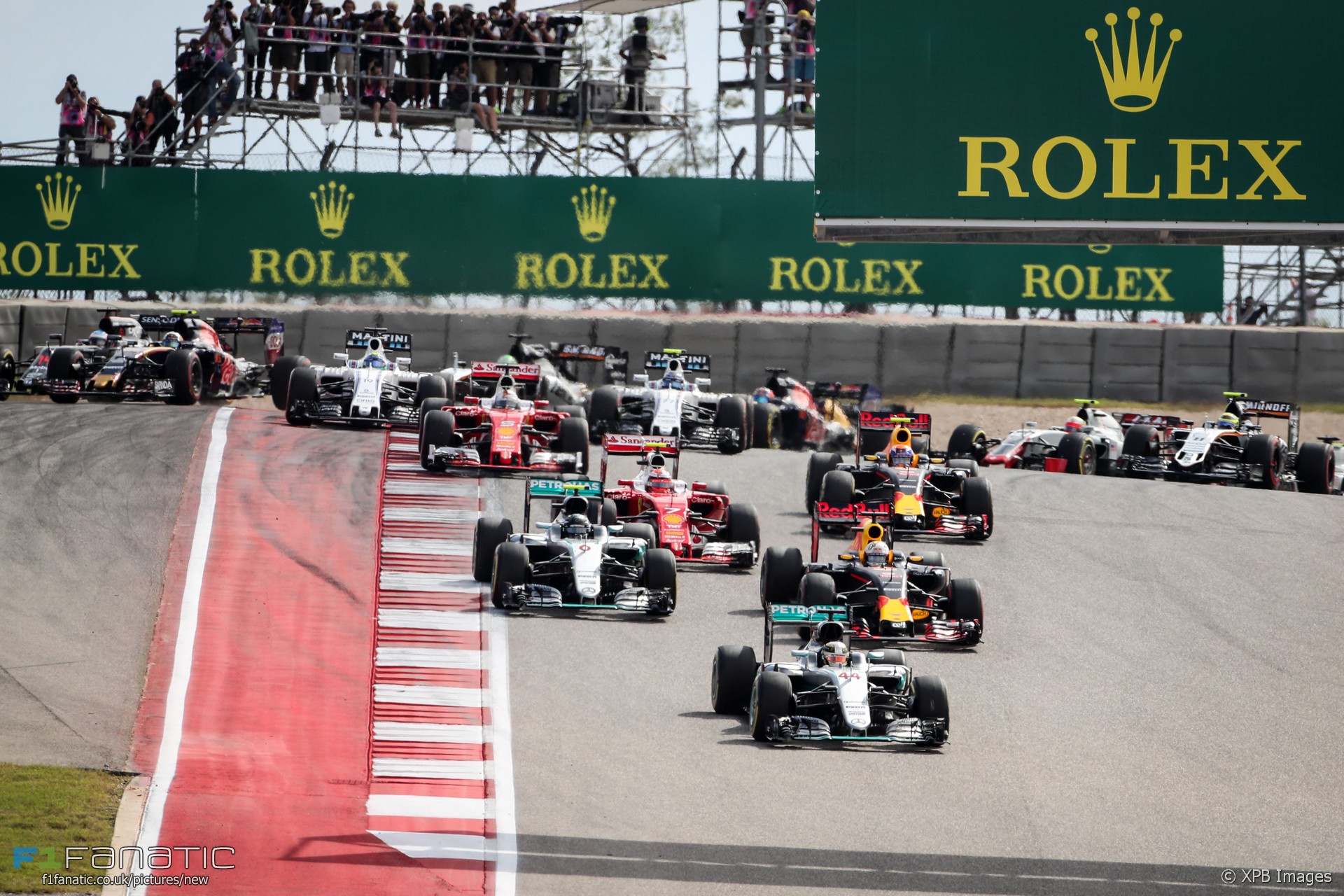 With only one Red Bull and one Ferrari making it to the chequered flag big points were on offer for the midfield teams last weekend.

Which drivers took advantage of the opportunity and who else impressed in Austin? Here’s the F1 Fanatic verdict on the full field.

Lewis Hamilton – Wasn’t happy with one of his set-up changes on Friday but produced the goods on Saturday, when a superb run through sector one secured his first pole position at the Circuit of the Americas. He said he’d done his homework on his starts and it showed: he led the field to turn one and from there on never looked like losing. He was clearly driving well within himself, but nor did he buckle under the championship pressure.

Nico Rosberg – Always seemed to have the three-tenths deficit to Hamilton which was apparent in first practice, and qualifying bore that out. Like his team mate he started on the soft tyres but he allowed Ricciardo to get the better of him in turn one, falling to second. He was going to have to pass Ricciardo on the road to get the place back until the Virtual Safety Car handed him the position.

Sebastian Vettel – Said he was unable to balance his car on Friday after losing a small wing element. Come qualifying he still wasn’t completely happy with his car and was beaten by Raikkonen. Not for the first time this year he tried to take a normal racing line through turn one at the start irrespective of what his rivals were doing and was tapped, though fortunately without lasting damage. Running long in the first stint gave him the option of using a two-stopper which might have got him ahead of Raikkonen had his team mate not retired.

Kimi Raikkonen – The Ferrari didn’t look capable of better than fifth, which Raikkonen delivered. Starting on the super-softs he gained a place from the soft-tyred Verstappen but was mugged by the Red Bull driver at turn 12 later on. His three-stop strategy would have put him in a strong position to take on Ricciardo had his final pit stop not gone awry.

Felipe Massa – All-but matched Bottas in Q1 and Q2, and only a tenth away in the final part of qualifying. With both Force Indias and his team mate suffering a setback at the start it fell to Massa to capitalise for the team, but he ended up seventh behind a Toro Rosso and a McLaren. The Virtual Safety Car went against him, but dawdling behind Sainz gave Alonso the chance to pounce.

Valtteri Bottas – Beat Massa to eighth in qualifying but didn’t appear to have the pace to catch Hulkenberg. The pair collided at turn one in what was a racing incident, but it wrecked the day for both of them.

Daniel Ricciardo – Split the Mercedes on Friday and lined up behind them on Saturday, the highest-placed driver to run the super-soft tyre at the start. That paid off as he got ahead of Rosberg and did everything he could to stay there until the Virtual Safety Car thwarted his efforts.

Max Verstappen – Led final practice but was shaded by Ricciardo in qualifying. Nonetheless he chose to start the race on the soft tyres having been pleased with his car’s long-run pace on Friday. However he lost a place at the start (to a car on softer tyres), and although he re-passed Raikkonen his pursuit of Rosberg appeared to cost him and then he spoiled his race by making the strange mistake of pitting when he wasn’t told to. He did follow the team’s instructions when it came to parking his car; the fact is was jammed in neutral hindered the marshal’s recovery efforts and prompted a Virtual Safety Car period.

Nico Hulkenberg – Looked on it throughout practice. He solidly out-qualified Perez and, importantly, both Williams drivers. But he was pinched between Vettel and Bottas at the start, ending his race on the first lap for the third time this year.

Sergio Perez – Sat out first practice while Alfonso Celis drove. He didn’t make the cut for Q3, partly due to a damaged brake disc, but enjoyed the benefit of ‘new-tyre pole’. He was hit from behind by Kvyat on lap one but recovered to eighth and could’ve been higher had he not pitted shortly before the VSC.

Kevin Magnussen – Renault said Magnussen had been unable to get a clean lap in Q1, where he was eliminated. He quickly got ahead of Palmer at the start and late at the race his team advised him he could gain places by making a late stop for super-softs. This he did, and by passing Palmer, Ericsson and Kvyat he achieved the target the team had set him. But a post-race penalty for leaving the track while passing Kvyat demoted him back to 12th.

Jolyon Palmer – His engineer took the blame for Palmer impeding Button in qualifying, and Renault were fortune not to get a penalty. Palmer duly made it into Q2. However in the race he fell behind Magnussen and, shadowing his team mate’s strategy, was unable to get back ahead and unwilling to risk a move.

Daniil Kvyat – After getting a vote of confidence from the team who announced his 2017 contract ahead of qualifying, Kvyat didn’t make the cut for Q3 as Sainz found three-tenths more in the car. He hit Perez on lap one and picked up a ten-second penalty, but his gap to Sainz at the flag was more than a minute.

Carlos Sainz Jnr – Was justifiably proud of his qualifying effort, claiming a place inside the top ten despite his final practice being ruined by two punctures. He delivered a strong race too, avoiding the first-lap dramas and benefiting from the Safety Car to run fifth. It’s doubtful he could have found a way to keep Alonso behind, so sixth was a superb result.

Marcus Ericsson – Said he wasn’t confident in the car but nonetheless made it through Q1. He ran as high as 11th late in the race after gambling on a one-stop strategy in the hope of but was passed by Kvyat and Ericsson.

Felipe Nasr – Having been happy with the car on Friday Nasr was displeased at his qualifying effort which left him on the back row of the grid. He tangled with Ocon early on, who was the only other driver to start on softs, but Nasr kept his going long enough to only make one further pit stop. That made his second half of the race on soft tyres more interesting and though he pitted too early to benefit from the VSC he ended up behind his team mate.

Fernando Alonso – Said the car wasn’t quick enough to reach Q3 and took consolation from starting 12th on new tyres. However a good start – taking the outside line at turn one as usual – moved him up into the points positions. He spent the race in pursuit of Sainz until the VSC period put Massa between them. But Alonso first barged Massa aside with an uncompromising move, then took Sainz in a more straightforward fashion, and equalled McLaren’s best result of the season.

Jenson Button – Was very unhappy at dropping out in Q1 after doing his first run on softs, meaning his final effort on super-softs would be decisive, only to be held up by Palmer. Starting on super-soft tyres looked like a bold move but he gained places on lap one and then passed Gutierrez for good measure. It was somewhat inevitable that Perez would come past him by the end of the race, but ninth was a fair reward.

Pascal Wehrlein – Took a scolding from the team after spinning off in final practice and hesitating to switch his engine off, hoping the marshals would recover him. He made amends in qualifying, besting Ocon by a quarter of a second. He raced well too and was putting the wounded Bottas under pressure at the end.

Esteban Ocon – His final run in Q3 was compromised by a sticking wheel nut which delayed his exit from the pits and forced him to run a hard out-lap, spoiling his tyre preparation. He started the race on the mediums and found it a struggle, eventually pitting after just 17 laps. He’d also picked up some damage and pitted twice more by the end of the race, finishing a distant 18th.

Romain Grosjean – Haas couldn’t replicate their Suzuka performance and were losing parts from their car – Grosjean said he only managed four clean laps on Friday. He then dropped out in Q1. However he made an aggressive start on super-softs, picking off Ericsson, Kvyat and finally his team mate for 11th. He and Button were in something of a stalemate in the final stint but retirements ahead promoted him to a point.

Esteban Gutierrez – Wasn’t running the new front wing which transformed the performance of the VF-16, but made it into Q2. He slipped behind Grosjean early on and retired shortly after his first pit stop with another brake fault.