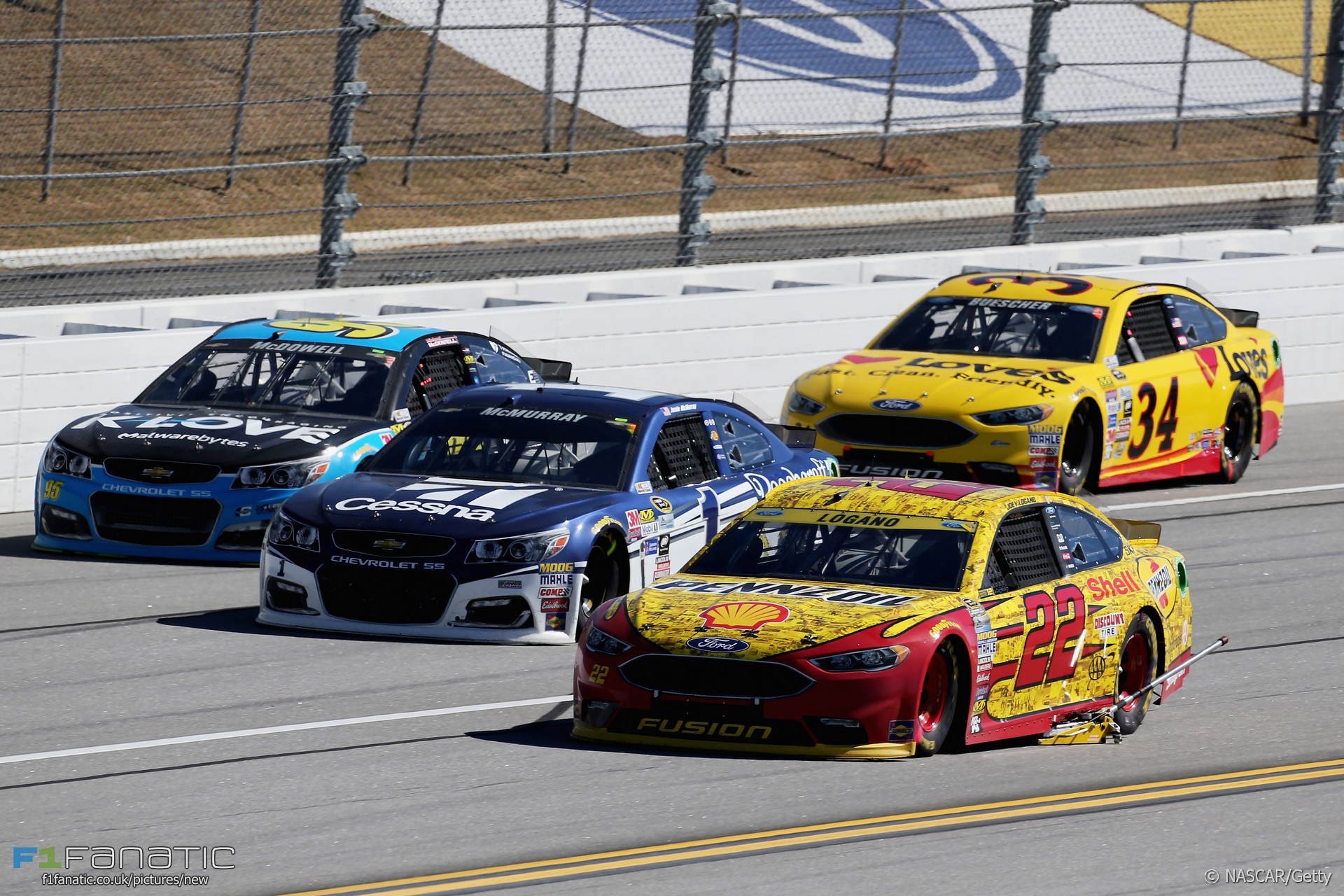 Four more drivers will be eliminated in three races’ time, leaving four in contention for the title at the final round.

The second race of the year at Talladega Superspeedway went into a tense overtime period. In a race with 31 lead changes and 6 cautions, the lead was initially contested by Martin Truex Jnr from pole, with Brad Keselowski and Chase Elliott also in the mix.

After cameos from Greg Biffle and Michael Annett, the original leaders were replaced by Joey Logano, Kevin Harvick and Ryan Blaney out front, though both Harvick and Blaney dropped from the sharp end later on. Logano eventually took the win despite completing a lap with a jack under his car (above) following a mistake at an early pit stop.

Brian Scott took by far his best result to date by finishing second ahead of and Denny Hamlin, who was in the mix throughout the entire race. Hamlin therefore became one of the eight drivers to progress to the final round of the championship, along with Logano, Jimmie Johnson, Kurt Busch, Matt Kenseth, Kyle Busch, Kevin Harvick and Carl Edwards.

Brad Keselowski and Chase Elliott were among those eliminated along with Austin Dillon, the latter losing his place on a tie-break after drawing on points with Hamlin. But perhaps the most unfortunate of the four to drop out was Truex, a four-time winner this year, who paid a high price for suffering an engine failure during the latter stages of the championship.

Shane van Gisbergen edged closer to a maiden V8 Supercars title as he and Alexandre Premat scored a win and a second in the two races at Surfers Paradise, however team mate and closest rival Jamie Whincup limited the damage with third and a win in the second race – both shared with Paul Dumbrell.

Race one very nearly ended under a Safety Car after a huge accident on lap 96 of the 102 scheduled between Garth Tander and Fabian Coulthard which saw the latter crash heavily into the pit wall.

The European Le Mans Series crowned its new champions in a dramatic finale at Estoril. The G-Drive Gibson of Giedo van der Garde, Simon Dolan and Harry Tincknell took race victory to win the LMP2 championship, but only after leaders into the final weekend, Thiriet by TDS Racing with Pierre Thiriet, Mathias Beche and Ryo Hirakawa hit problems.

The Yvan Muller-run LMP3 of Thomas Laurent, Yann Erlacher and Alexandre Cougnaud won their first race in LMP3, and GTE honours along with the championship were taken by Beechdean AMR with Alex MacDowall, Andrew Howard and Darren Turner.

Niall Murray became only the third driver in Formula Ford history to win the festival twice after jumping pole sitter Scott Malvern early on in the race and sprinting away from his rivals to win by almost four seconds ahead of Malvern with Chris Middlehurst. Middlehurst enjoyed a battle with Oliver Askew for the final podium position until Askew was forced into retirement with a mechanical failure.

Cal Crutchlow claimed his second Moto GP victory after champion Marc Marquez fell from the lead on lap nine at Phillip Island – ironically at Honda corner. Mixed conditions in qualifying left a jumbled grid that saw both factory Yamahas starting outside the top ten, yet Valentino Rossi recovered from fifteenth to finish second while Maverick Vinales took another podium for Suzuki charging from thirteenth to third.