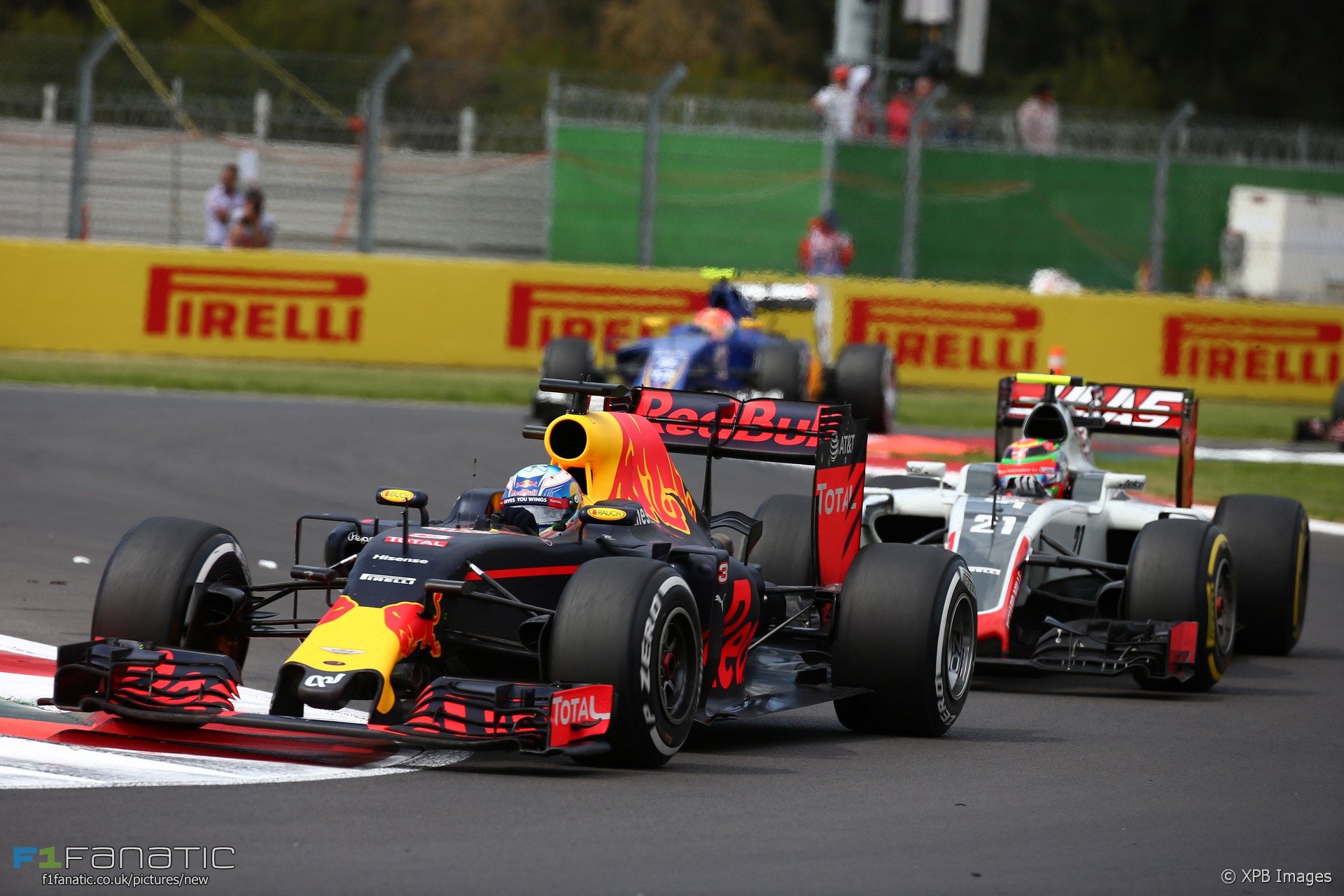 A lack of grip at the Autodromo Hermanos Rodriguez made for a frustrating race for most of the field. Here’s F1 Fanatic’s verdict on how they did.

Lewis Hamilton – Quick on Friday, though fractionally out-paced by Vettel. He was consistently ahead of Rosberg in qualifying on both types of tyre and duly took pole position. A glazed front brake caused him to lock up at turn one, an error which would have been more costly if the run-off area wasn’t so generous. From then on it was fairly straightforward for Hamilton although he had to change his engine settings when Mercedes detected high exhaust temperatures.

Nico Rosberg – Said Mercedes had a lot of work to do having been some way off Hamilton’s pace on Friday. He didn’t have his team mate’s pace during much of qualifying, but pulled out a decent final lap in Q3 to reach the front row. The gap in performance between the pair of them was apparent in the race, too: Rosberg never looked likely to catch Hamilton and instead came under attack from Verstappen, but kept second place.

Sebastian Vettel – Surprisingly topped the times on Friday but was deeply unimpressed after qualifying during which he found no pace on the super-soft tyres. That was nothing compared to what followed after the race, however. Having run a long first stint and pressed on in the second half of the race he caught Verstappen but exploded in anger when the Red Bull driver went off at turn one without ceding position. Vettel then barged into the side of Ricciardo when the other Red Bull tried to take advantage. In his defence, his race engineer gave him the incorrect impression that Verstappen had been told to let him through. But that doesn’t excuse his complete loss of temper – had he kept control and not lashed out at Ricciardo he would have kept his podium finish.

Kimi Raikkonen – Complained of understeer on Friday and was the best part of half a second off Vettel but he qualified ahead despite an engine problem. In the race he was caught out by a lack of grip on the medium tyres, which he hadn’t run in practice having brought fewer sets than almost every other driver. He managed one of the race’s few passes against Hulkenberg, however.

Felipe Massa – Was well off his team mate’s pace on Friday, complaining about variation in grip levels from the tyres, and the situation changed little on Saturday. He got ahead of Bottas at the start put his team mate passed him early in the second stint as Massa struggled with his tyres. His straight-line speed kept him safe from Perez, however.

Valtteri Bottas – Encouragingly inside the top ten during both Friday sessions and well ahead of Massa in qualifying. Despite slipping behind his team mate at the start he got ahead again but didn’t have the pace to catch Hulkenberg.

Daniel Ricciardo – Red Bull had a low-key Friday but Ricciardo was the quicker of the pair. Verstappen beat him in qualifying, however, as Ricciardo was perplexed by his car’s handling. He took advantage of the Safety Car to pit on the first lap and get rid of his super-softs, and although he worked his way speedily through traffic he wasn’t able to use the time gained to jump either of the Mercedes. He let Verstappen through when asked which proved prudent, as he caught his team mate and Vettel at the end of the race and their penalties eventually allowed him to take third.

Max Verstappen – Missed some of the first practice session after his brakes caught fire. Couldn’t replicate his Q2 pace in Q3 – a session where everyone seemed to struggle – but nonetheless took third. He took the fight to Rosberg when a chance appeared in traffic and came close to snatching second, but after that fell into the clutches of Vettel. He was judged to have overstepped the mark cutting the first corner with Vettel but it was a borderline call – Rosberg had gone unpunished for a similar move on the first lap.

Nico Hulkenberg – Had good pace on the soft tyres on Friday and produced a gem of a Q3 lap to beat both Ferrari drivers to fifth. Though well aware that Force India’s fight was not with the Ferrari drivers he kept Raikkonen behind for several laps. He jeopardised his hard work with a spin when Raikkonen came through, but this was otherwise an excellent weekend’s work.

Sergio Perez – Not as quick in the Friday afternoon session as the track cleaned up and the situation was much the same on Saturday: He was half a second off Hulkenberg as he missed the cut for Q3. In the race he got snookered behind the Williams drivers while his team mate beat both of them.

Kevin Magnussen – Unlike Palmer, Magnussen had never driven on this track before, yet he was the quicker of the two in both Friday sessions and claimed a place in Q2. In the race he tried to use a set of super-softs for a late push but it didn’t pay off and he finished 17th.

Jolyon Palmer – Not satisfied with his balance on Friday evening, matters took a turn for the worse on Saturday when he clattered a kerb in final practice which surprisingly left him with a crack chassis, preventing him from participating in qualifying. He ran almost the entire race distance on the same set of medium tyres and held 12th until the McLarens found their way through.

Daniil Kvyat – An electrical problem left Kvyat without power in Q1 and he couldn’t make it beyond there. In the race he made life unnecessarily difficult for himself by refusing to yield a position when he was told to, leading to a penalty.

Carlos Sainz Jnr – Made it into the top ten on Friday and – remarkably – did so again on Saturday, repeating his Q3 heroics from Austin. He was careless on lap one, forcing Alonso off and collecting a penalty, and also delayed by a gearbox problem. On top of that he lost a place to Button while getting out of Verstappen’s way, leaving him 16th.

Marcus Ericsson – Clearly much happier with the car than Nasr in qualifying, producing a fine lap to reach Q2. After first-lap contact with Wehrlein he pitted and ran the same strategy as Palmer, but impressively finished one place outside of the points in 11th.

Felipe Nasr – A front wing failure in first practice put him on the back foot and despite using the same set-up as Ericsson in qualifying he couldn’t make it out of Q1. He was the only driver to start on the medium tyres which he stuck with for most of the race before switching to super-softs. He reluctantly obeyed Sauber’s instruction to let Ericsson through but finished half a minute behind his team mate.

Fernando Alonso – Alonso’s run in second practice came to an early end due to a problem with his braking system. He took 11th on the grid but celebrated as if he’d taken pole having gained the highest new-tyre starting position. After his delay with Sainz a slow second pit stop wrecked his chance of points.

Jenson Button – Made a breakthrough with the car’s set-up on Friday but was still struggling to get the tyres working in qualifying. The result was clear to see in his sector times: much of the gap to Alonso was at the beginning of the lap where his tyres were still coming in. Sunday was better, his opportunistic pass on Sainz one of the race’s best, but he spent most of the time stuck behind other cars.

Pascal Wehrlein – Said his Friday preparation was the best he’d had “since quite a long time” and he made good on that on Saturday, grabbing a spot in Q2. Unfortunately he went out in a first-lap racing incident.

Esteban Ocon – A difficult Friday left him with a lot to do in the Saturday morning session. A problem was identified with his car’s handling and Wehrlein beat him by half a second in qualifying. He was unable to overcome those problems in the race and finished a distant 21st.

Romain Grosjean – His qualifying run was disrupted by Gutierrez spinning in front of him but his car’s performance was a greater concern, describing his starting position as “unacceptable”. The misery continued in the race where his car was pulling to the left in the braking zones and he finished a poor 20th.

Esteban Gutierrez – An error in qualifying meant he dropped out in Q1 at home. He spent the race nursing his brakes but brought the car home ahead of Grosjean.