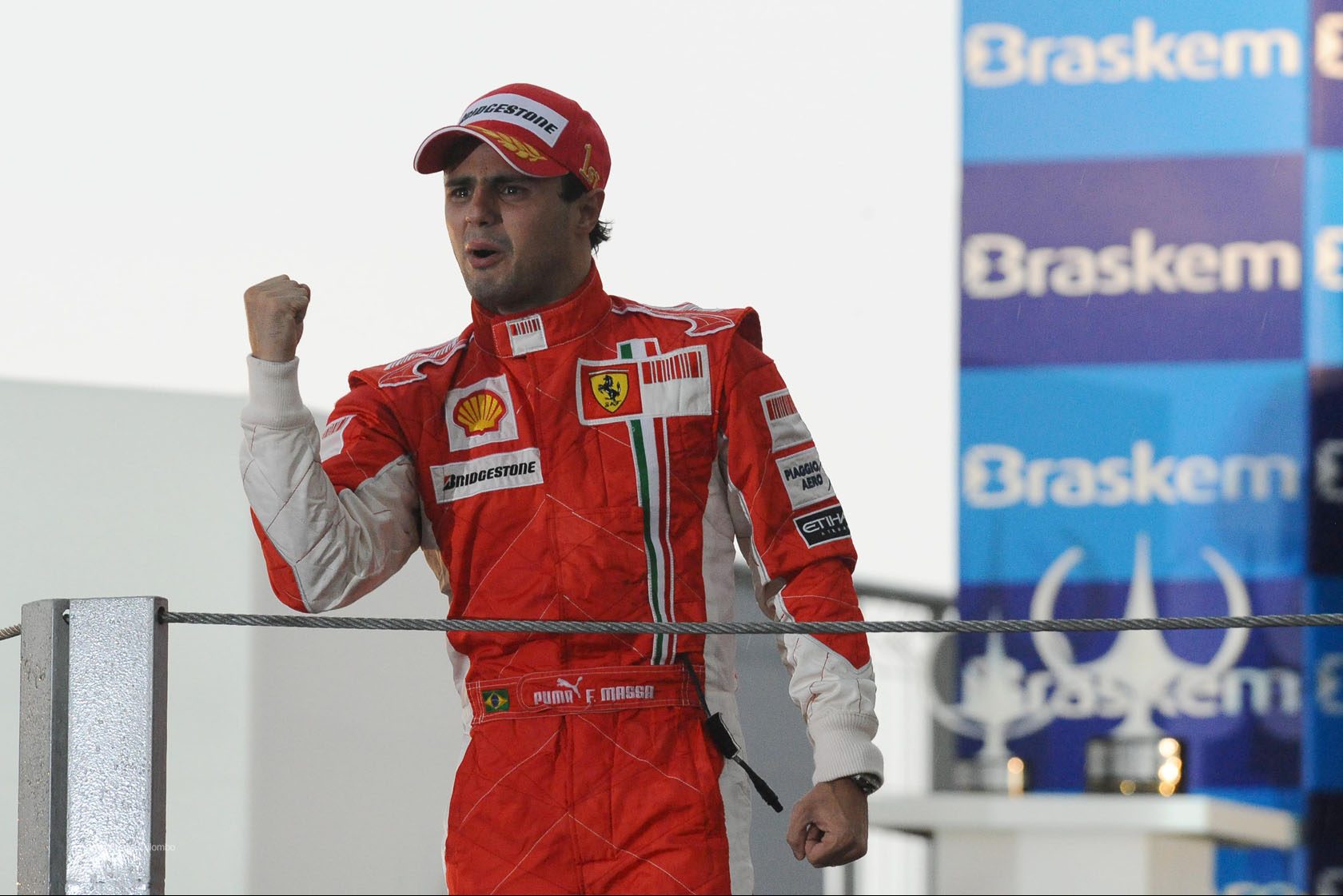 Felipe Massa will start his 14th and final home grand prix at Interlagos this weekend.

It’s a bittersweet venue for Massa who has enjoyed delirious victories in front of his local crowd but also lost the 2008 world championship there.

As Massa prepares for his life after Formula One, we reflect on ten of the highlights of his 15 years at the top.

Massa began his grand prix career with Sauber in 2002 at the age of just 20. The Swiss team was looking to unearth a wunderkind for the second consecutive season, having been spectacularly rewarded for their faith in Kimi Raikkonen when he made his own debut the previous year.

While Massa never hit the heights Raikkonen had done the previous campaign, there were clear flashes of promise in his debut season. He managed three top six finishes, including sixth place in only his second race in Malaysia. His strongest performance though came at the Nurburgring, where he outraced his experienced team mate Nick Heidfeld to sixth place on a day when 16 drivers finished.

However Massa’s first season was erratic at times. At Monza he collided with Pedro de la Rosa and was given a ten-place grid penalty for the following round, so Sauber benched him for the next race.

He spent 2003 on the sidelines too, but having landed a Ferrari test deal he was well-placed to smooth off his rough edges and return a better driver.

For the 2004 and 2005 seasons, Massa returned to Sauber, but the team was finding it increasingly difficult to compete with its manufacturer-backed rivals. In two seasons he managed just nine (top-eight) points finishes.

Massa scored well in some high-attrition races – such as fourth at Monaco in 2004 and fifth in Canada the following year. But arguably the pick of his Sauber drives came at Hockenheim in 2005, where he came home a strong eighth of 17 finishers in front of a host of better-equipped competitors.

But Ferrari saw enough potential in Massa to offer him the opportunity to replace his compatriot Rubens Barrichello in 2006. It was the beginning of a partnership that lasted for eight seasons.

In his first race for the Prancing Horse in Bahrain, Massa threw away a potential podium with an early spin, but he made amends in Malaysia a week later.

Starting 21st after receiving two engine change penalties, he brilliantly used a one-stop strategy to fight his way up to fifth place. Few had expected him to lead home new team mate Michael Schumacher so soon, especially from such a lowly grid position.

Massa took his debut podium at the Nurburgring three races later. And when Ferrari made a step forward in the mid-season Massa found himself regularly challenging at the front. But more often than not he was unable to match Schumacher for pace.

Massa’s gradual improvements continued in Turkey where he pipped his team mate to pole and took an early lead. With Schumacher battling for the championship, it was expected that the Ferrari leadership would switch the order. But a Safety Car early in the race allowed Schumacher’s title rival Fernando Alonso to separate the pair.

Schumacher spent the remainder of the race stuck behind the Renault, leaving Massa free to take his first victory. It proved the first of a trio of consecutive race wins on the Istanbul Park circuit.

At the season finale at Interlagos, Massa later went on to win his second race in front of his home crowd. This guaranteed him a third place finish in the drivers’ championship – remarkably, the first time he had ever made it into the top ten.

When Schumacher departed the team at the end of the season, Massa was paired with Raikkonen – a formidable opponent at the peak of his powers. Despite his impressive performance in 2006, few pundits gave the Brazilian driver much of a chance of matching his new team mate in 2007.

A scruffy opening two races seemed to confirm those suspicions. But against expectations Massa immediately bounced back with a pair of dominant wins from pole in Bahrain and Spain.

The latter was the more eye-catching thanks to Massa’s first corner tussle with Alonso. Heading into the first corner at the Circuit de Catalunya side by side, the Ferrari driver resisted a bold attack from his McLaren rival, sending Alonso skittering across the gravel.

At this stage, with a quick Ferrari and equal status in the team, it was beginning to look like Massa might be able to fight for the championship. But though he led Raikkonen in the championship for most of the campaign, his team mate’s late season charge saw him take the honours – albeit thanks to Massa waving him past in the season finale.

Going into 2008 it was once again largely assumed that Massa would play second fiddle to his more illustrious teammate. And, as in 2007, the Ferrari driver made a miserable start to the season, crashing out in Australia and spinning into retirement in Malaysia.

There remained a substantial contingent of Massa doubters who questioned both his speed and his capabilities in wheel-to-wheel combat compared to the likes of 2007’s astonishing newcomer Lewis Hamilton. But a trio of mid-season wins thrust Massa into championship combat with the McLaren driver.

Ironically it was a race Massa didn’t win which arguably showed him at his best. A difficult pair of races at Silverstone and Hockenheim had left Massa on the back foot going into the Hungarian Grand Prix, but from third on the grid at the Hungaroring he started superbly and muscled his way around the outside of Hamilton into the lead.

It was a stunning move, and it looked to have set the Brazilian driver on his way to his first ever win from outside of the front row – and a ten point haul that would send him back into the championship lead. But as he crossed the line to begin the 68th of 70 laps Massa’s Ferrari engine suddenly failed and the car crawled to an agonising halt. It was a bitter end to what had arguably been his best performance to date.

Despite the Hungaroring setback, Massa continued to impress in the subsequent races of the season, picking up further victories in Valencia and – more controversially – Spa. His world champion team mate Raikkonen dropped out of title contention.

Despite losing another likely win to a catastrophic Ferrari refuelling error in Singapore, the Brazilian went into the final race of the season on home soil just seven points Hamilton in the championship standings. Massa would need to win the race and hope his rival did not make it into the top five positions.

The Ferrari driver most certainly held his end of the bargain. He may have been contesting a title decider for the first time, in front of the expectant eyes of 70,000 of his compatriots, but Massa was utterly imperious. The two separate rain storms that soaked the track at each end of the race did nothing to hinder the Brazilian en route to a dominant lights-to-flag victory. With Hamilton floundering down in sixth after a late mistake, it seemed the hometown hero had somehow overcame the odds to snatch the title.

We all know what happened next. As Massa, along with his pit crew and spectators, were euphorically celebrating what seemed to be a world championship winning drive, Hamilton was busy passing Timo Glock’s dry-tyred Toyota as he accelerated up the hill to take the chequered flag, securing himself the fifth place he needed for the title.

Disconsolate, Massa was left to endure the podium ceremony, standing on the top step a defeated victor – a suitably surreal end to a topsy-turvy season. After such a virtuoso performance it would have been unthinkable at the time that this was Massa’s final grand prix victory.

As soon as the 2009 season got underway it was clear that the 2008 form guide meant nothing – the running order had practically been turned on its head. Massa’s Ferrari was both uncompetitive and unreliable. He failed to pick up a single point in the opening four races.

However the Brazilian driver was competitive relative to his teammate Raikkonen, and a run of five consecutive top six finishes culminated with his only podium finish of the season at the German Grand Prix.

Starting from eighth place at the Nurburgring, Massa used his KERS powered Ferrari to good effect, jumping up the order at the start, and eventually beating both of the all-powerful Brawn GP cars home to take an impressive third.

With the Ferrari fast improving and Massa on a roll, things were looking up for the second half of the season. But his season came to a cruel end at the Hungaroring, where a loose metal spring from another car struck him on the head during qualifying. Massa was fortunate to survive a crash which left him with a fractured skull.

Massa made a full recovery from the horrific injury but he never reached the same heights he had hit before leading many to question whether he’d lost his edge. Another new team mate – the indomitable Alonso – ruled the roost from the moment he arrived at Ferrari. And just when it seemed Massa might come out on top he was reminded of his place in the new order in the most brutal fashion.

Despite being the slower of the two Ferraris for much of the Hockenheim weekend, a lightning start sent Massa into the lead from third on the grid. With overtaking difficult in the final DRS-free season he seemed set for a morale-boosting victory, one year to the day since his Hungaroring crash.

But with Alonso the best-placed Ferrari driver in the championship, a victory for him was the team’s preferred outcome. Sentimentality played no role in the decision and nor did concerns about team orders being illegal at the time.

On lap 49 of 67, following the now-infamous message “Alonso is faster than you”, Massa slowed and allowed his team mate into the lead. The ensuing controversy overshadowed the fact that Massa’s ultimate second place finish marked an impressive return to form after eight races off the podium.

After all of the blows he had suffered during his Ferrari years, it was perhaps inevitable that Massa’s form slumped badly during his final three seasons for the team. The team scored 35 podium finish during these years, but Massa took just three of them.

Against expectations, a move to a hitherto struggling Williams team turned out to be an unexpected career revival. Armed with their new hybrid Mercedes engines, Massa’s new team was suddenly able to compete at the sharp end of the field.

Though young team mate Valtteri Bottas out-paced him more often than not, his final three-year stint : leading races, podium finishes, and even a sensational pole position at the Red Bull Ring in 2014.

The pick of his Williams performances came at the race that ended that season in Abu Dhabi. Qualifying fourth, he moved into third at the start, gained a further place due to Nico Rosberg’s late technical problems, and put pressure on his former title rival Hamilton for the race victory, before eventually coming home second.

While the latter years of Massa’s career provided few highlights, at his peak he was good enough to take the championship fight to the final lap of a season. Sadly there will always be a question mark over what he might have achieved had it not been for his 2009 crash.

He may have lost the championship in the cruellest of twists, but his 11 race wins cement his position as one of the top drivers of his time.