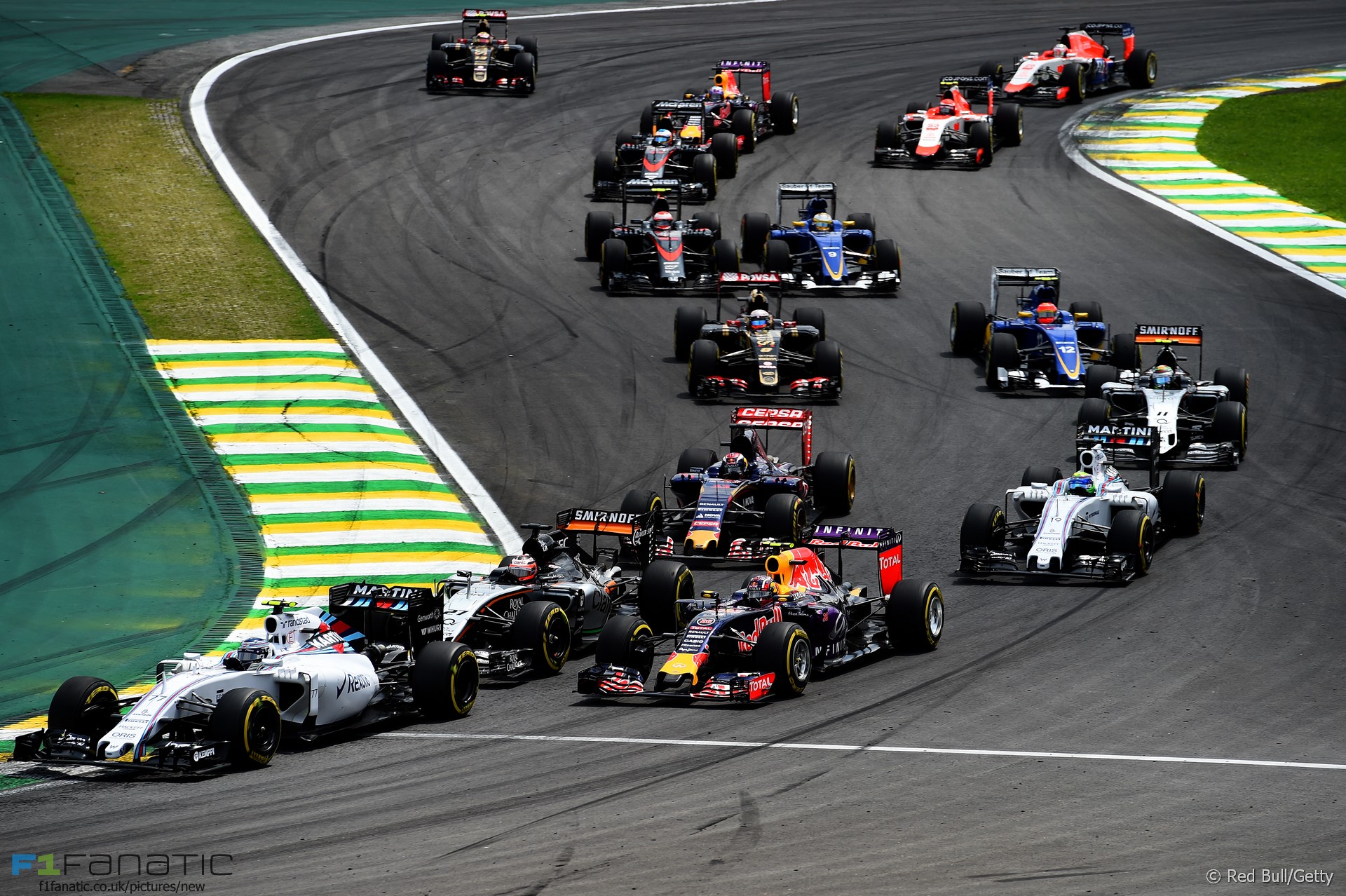 Brazil welcomes Formula One back to the country to crown a year of top level sport after a successful summer Olympics and Paralympics. The Brazilian crowd are fanatical about their sport, particularly for their home heroes who will garner a massive roar from the grandstands every time they pass.

The championship showdown between the two Mercedes drivers will undoubtedly take centre stage this weekend. As usual the two can expect to slug it out for victory but if Red Bull and Ferrari can get in the mix it could have serious implications for the title battle.

The Brazilian Grand Prix has crowned many world champions in the past and could do so again this weekend if Nico Rosberg takes the top step of the podium. He drove to victory both in 2014 and 2015 and he will be doing everything in his power to take his hat-trick this weekend.

Lewis Hamilton has never won in Brazil and had to follow his team mate home last year after being unable to challenge on track. He blamed a lack of downforce in the dirty air and then challenged his Mercedes team for not allowing him to change to an alternate strategy.

This year the situation is very different and the momentum at the moment is with Hamilton, having dominated proceedings in Mexico and the USA. Rosberg was at a loss to explain his deficit in Mexico and will hope to reverse this slide.

The short lap of the Interlagos circuit should reduce the one lap pace advantage that Mercedes currently hold over the chasing pack, which should bring the competition closer in qualifying. This year Rosberg has struggled when the track temperatures are lower and in the wet compared to his team mate and may come under pressure from behind.

The team are going out of their way to be fair strategically for both drivers, being well aware there is a championship on the line. Hamilton’s vibration from the tyres during the first stint in Mexico would normally have required an early precautionary pit stop to resolve, but that would have compromised his race-winning strategy, so he was allowed to try to continue. They are likely to face more tough decisions in the final two races under immense pressure.

Sebastian Vettel has won twice at Interlagos, but last year Ferrari were in “no man’s land” between the Mercedes and the rest of the field, taking an unchallenged third and fourth positions. Indications are that both Ferrari and Red Bull will be much closer in 2016 and may have a role to play in deciding the championship outcome if they can get amongst the Mercedes on Sunday.

Vettel will be hoping less eventful weekend than in Mexico and has to kerb his frustrations on the team radio if he is to stay out of trouble.

Key staff changes behind the scenes on Kimi Raikkonen’s side of the garage have resulted in a better working relationship with his engineers which has been linked to his upturn in form in the latter part of 2016.

Raikkonen’s sole victory in Brazil came in 2007 courtesy of his team mate Felipe Massa, where he pinched the drivers’ title from the squabbling McLaren drivers.

Massa will relish every moment of his final appearance on home soil in front of his adoring fans. His emotional victory in 2008 where he nearly clinched the championship with a dominant drive is remembered as one of his finest moments. His gracious reaction to the last gasp loss of the title is a strong measure of his character.

He has had a great deal of success at Interlagos through his career, having won twice and finished on the podium a further three times. He has an outside chance of doing so again this year, but a solid points finish is more likely given the resurgence of Red Bull.

Massa finished in eighth position on the road last year, but was disqualified after the race for exceeding the permitted tyre temperatures on the grid. Williams later admitted they dropped their appeal against the exclusion on cost grounds.

Daniel Ricciardo had a woeful Brazilian Grand Prix weekend in 2015 as he had to endure power unit grid penalties and had to fight through the field, eventually finishing just outside the points in 11th place.

Their recent upturn in form, partly down to their improved Renault power unit, should stand them in good stead to challenge for the podium this weekend.

Engineers inside the team have pointed out that Max Verstappen’s more aggressive style wears the tyres more quickly than his team mate, which could prove critical on a tyre limited circuit.

Nico Hulkenberg has regularly performed well in Brazil, particularly when the weather plays a role. He took a shock pole position for Williams in 2010 in tricky conditions, and crashed out of a battle for the lead with Hamilton in 2012. If the track is wet again for the race this weekend, expect Hulkenberg to make good gains.

Sergio Perez finished out of the points in 2015, which did not compare favourably to Hulkenberg who took sixth position. Both cars need to perform well this weekend to maintain their slender nine point lead over Williams in the constructors battle for fourth position.

The top brass at Renault has said that it is not as simple as a straight fight between Jolyon Palmer and Kevin Magnussen for the second seat next year, with Esteban Ocon and Esteban Gutierrez also being considered, but a good performance from either of their drivers this weekend would not hurt their chances.

Palmer has taken time to settle in to the car but has looked more promising of late and will be eager to beat Magnussen this weekend, who is known to have been holding talks with Haas incise he does not secure a contract extension at Renault.

The Interlagos circuit is eight hundred meters above sea level which, although not as high as Mexico, will exacerbate the deficit of their 2015 Ferrari power unit. Both drivers have joked that they will be performing a rain dance in order to improve their chances this year.

It can hardly get worse for Carlos Sainz Jnr compared to last year as his power unit failed on the way to the grid and could only manage a few hundred meters before being forced into retirement, venting his frustration to the media afterwards.

Sauber continue to appoint experienced key personnel to bolster their chances of improvement next season. They have managed to secure the services of Joerg Zander, who will take the role of technical director after Audi abruptly canned its World Endurance Championship programme. He previously worked for the team in their BMW Sauber and also has experience at BAR/Honda and Williams.

The team have two more chances to take points this season to beat Manor, and Marcus Ericsson was hovering around the points last time out in Mexico. If the battle between the front runners had ended in the barriers, his target would have been achieved.

The lottery of a wet race may help them move up the order. Felipe Nasr will hope to be the one to take the glory here at his home race, after beating his teammate here last year to finish in 13th place.

McLaren will make the most of their chassis performance in the twisty middle sector of the lap, but are likely to be vulnerable down the long start-finish straight. The team did not fare well last year, finishing in 14th and 15th place, splitting the Sauber drivers.

This is one of the few circuits on the calendar where Fernando Alonso has not taken victory, but he has finished on the podium eight times and won both his championships at this track.

Jenson Button triumphed in a chaotic 2012 race, followed home by Alonso. The chances of a repeat for the two drivers is slim indeed, but points are possible especially if the weather intervenes once again.

Esteban Ocon was unable to get to grips with the setup of his car in Mexico and needs to put in a good performance if he is to impress Force India, who are considering him for the second seat next season alongside Sergio Perez. He was out-performed in qualifying by Pascal Wehrlein, only for the German to suffer a first lap collision that put him out of the race, wasting a potential good finish.

Neither driver has any experience of the Brazilian circuit so once again will start on an even footing.

Current GP3 championship leader Charles Leclerc will take the place of Esteban Gutierrez for his fourth run in FP1 this season and will have an intensive program of work for the Friday practice sessions. The team will also test new brake material and the Halo.

The team’s performance in the two North American races was disappointing and they now look unlikely to be able to challenge Toro Rosso ahead in the constructors championship. With no real danger from Renault behind they are likely to finish in eighth position in their debut season, which is a stronger result than many expected.