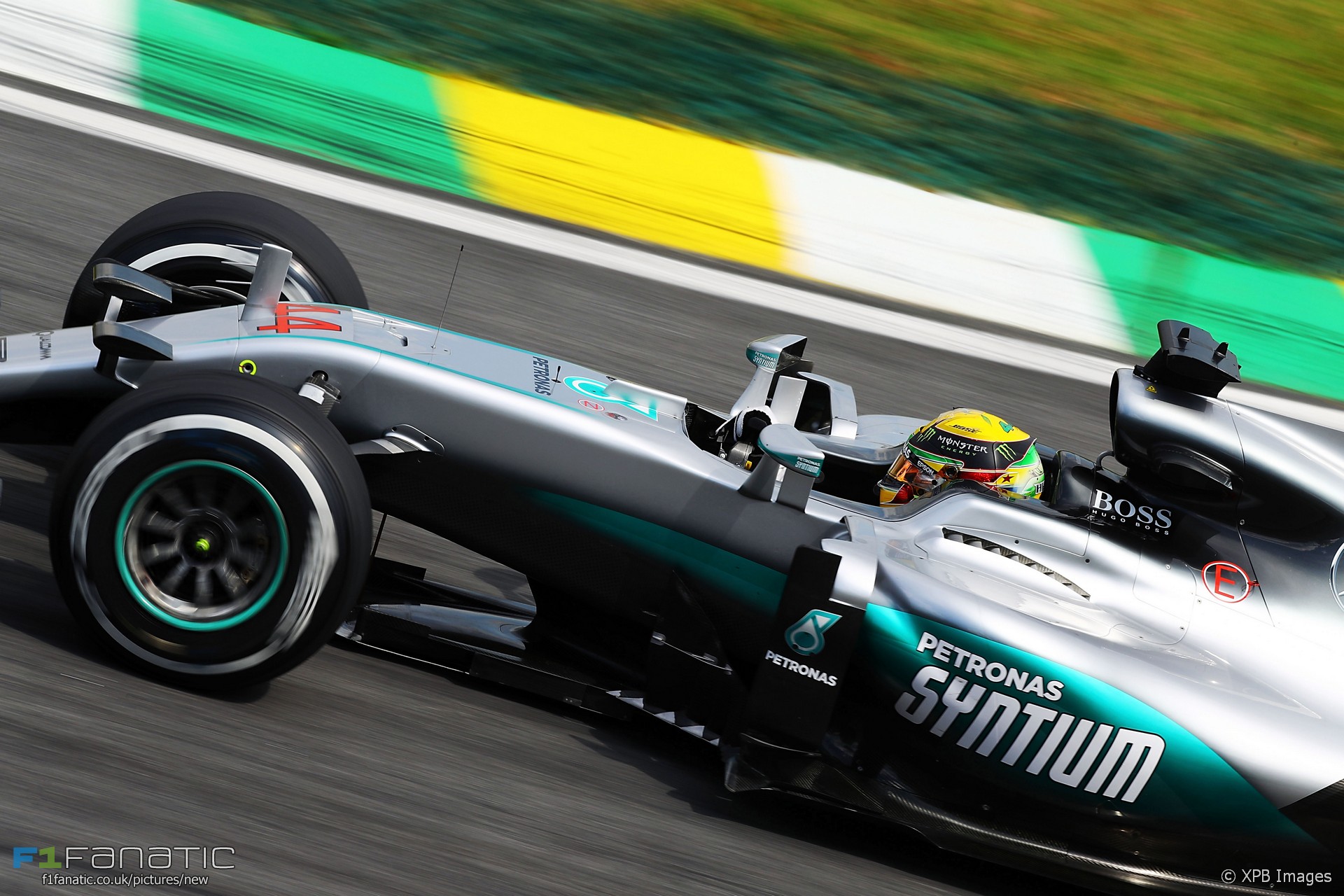 The anticipated rain turned out to be little more than drizzle. But the contest for pole position was fiercely fought between the two Mercedes drivers.

Lewis Hamilton led all three sessions but team mate Nico Rosberg was never far behind as they vied for the pole position for tomorrow’s potentially championship-deciding race.

The 11th pole of the season for Hamilton secured him this year’s Pole Position Trophy.

The entire field hit the track within seconds of the session starting as clouds gathered at Interlagos. Concerned about the possibility of rain, the two championship contenders led their rivals out of the pits.

Hamilton wasted no time in banging in a quick lap which was the fastest of the weekend up to that point. A 1’11.511 left him comfortably three-tenths clear of his team mate.

Max Verstappen took third ahead of the two Ferraris. The second Red Bull of Daniel Ricciardo was next following a compromised preparation lap.

There was little change in the fight to escape the drop zone as most of the remaining drivers found themselves in traffic. The Sauber pair occupied the final row behind the two Manors.

Jenson Button was visibly unhappy with his car’s balance and locked up on his last effort as he ended up half a second shy of his team mate. He was laps 17 thousandths slower than Jolyon Palmer, who beat him to the final place in Q2.

Hamilton repeated his feat from Q1 by producing another fastest lap to lead Rosberg. Hamilton was fractionally slower than his team mate through the first two sectors but found almost two-tenths in the run from Juncao to the finishing line.

Williams had shown promising pace compared to their rivals Force India throughout practice, but were stung in the second part of qualifying. Valtteri Bottas believed his 1’12.420 would secure him a place in Q3 and opted not to run again but was caught out.

Both Force India drivers made it into the 1’12.3s and were surprisingly joined by Fernando Alonso’s McLaren and the Haas of Romain Grosjean. Bottas therefore missed the cut by six-hundredths of a second and his team mate was also eliminated in his final home race.

The two FW38s were joined by the Toro Rosso pair plus the second Haas of Esteban Gutierrez and Jolyon Palmer’s Renault.

Rosberg continued to chip away at the gap to his team mate in the top ten shoot out. But each time of asking Hamilton had just enough in hand.

Hamilton broke into the sub-71s times with his first run, lowering the mark to a 1’10.860. Rosberg couldn’t match that, posting a 1’11.022 despite gaining time at the end of the lap where Hamilton had been stronger.

The final laps began with Hamilton ahead of Rosberg on the road. Rosberg was quicker through the first sector and gave away just four-hundredths to Hamilton in the middle of the lap.

It all came down to the final sector. On the long climb from Juncao Hamilton was faultless, and he returned to the start line one minute, 10.736 seconds after he crossed it. Rosberg was next – and took a tenth of a second longer.

But it had been close. “It was all in the last sector, Nico,” his engineer told him. “You were over a tenth slower than your previous lap.”

Behind the duelling Mercedes the Ferrari of Kimi Raikkonen appeared in a somewhat surprised third, having not had a good start to his final lap. He will share row two with Max Verstappen, followed by their respective team mates.

While the focus was on the championship contenders, Romain Grosjean produced a stunning lap in his Haas to claim seventh ahead of the Mercedes-powered customer teams.

55 comments on “Hamilton beats Rosberg to pole in tense session”