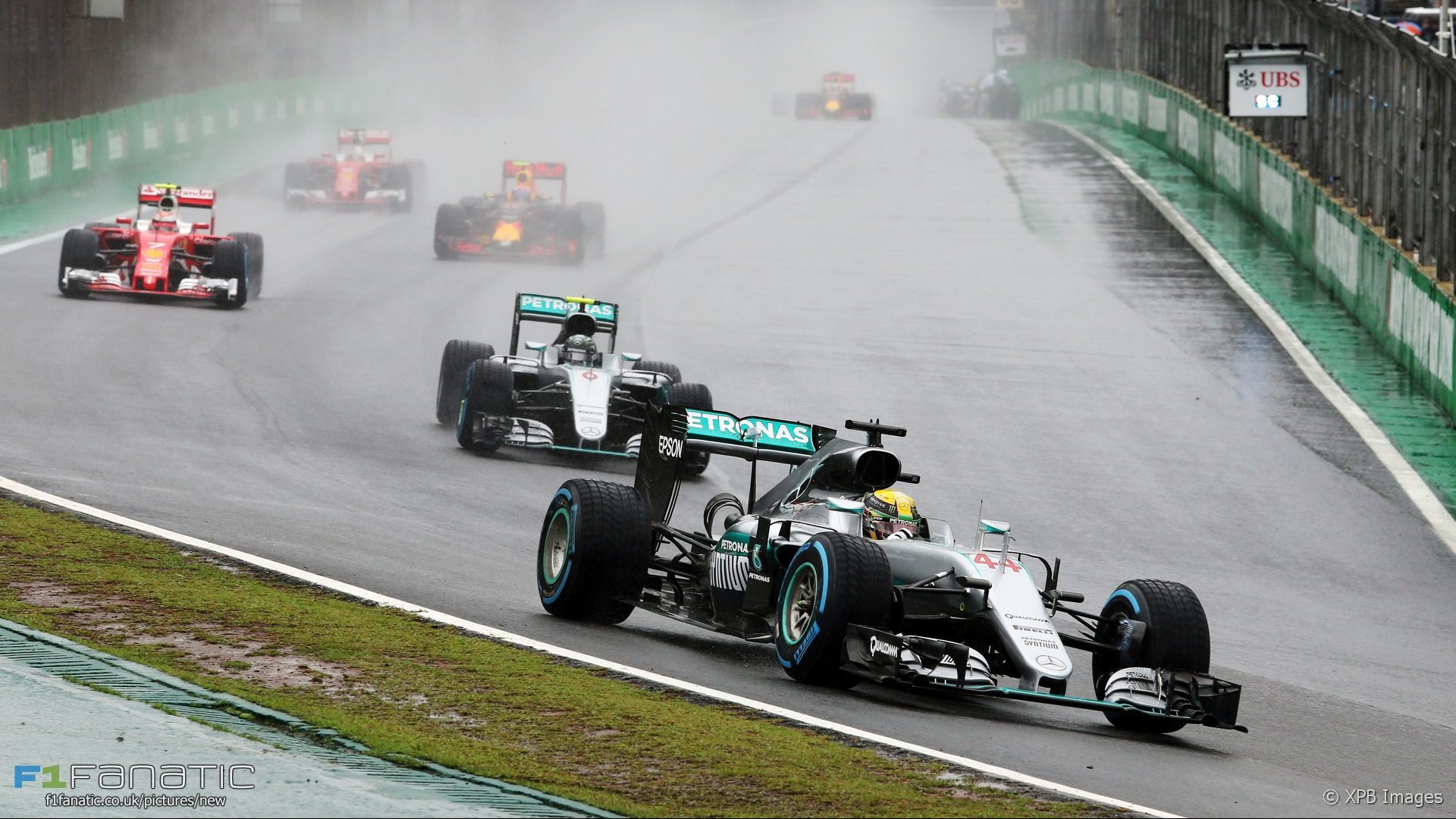 Lewis Hamilton – Rosberg kept him honest in the fight for pole but Hamilton prevailed. He was at his imperious best in the race, effortlessly quicker than Rosberg. Factor out the stoppages and he’d have finished 35 seconds up the road instead of 11.

Nico Rosberg – Heading into the final sector on his last lap in Q3 he needed only to replicate his run from his first lap to take pole position. But he fell short by a tenth of a second. If Rosberg genuinely was trying to win rather than settle for second it didn’t look like it, though his half-spin early in the race could have cost him dearly.

Sebastian Vettel – Admitted to being too conservative at Juncao on his final lap which account for his sub-one-tenth gap to Raikkonen, two places ahead. The same corner caught him out in the wet race and Vettel struggled to make an impression from then on. Verstappen crushed him aside late in the race though Vettel eventually got by Sainz for fifth.

Kimi Raikkonen – He confessed to a less-than-perfect start to his final lap in Q3 and was therefore surprised to take third. He was immediately passed by Verstappen at the start then was caught out by aquaplaning on the pit straight which caused a frightening crash.

Felipe Massa – The Williams clearly preferred the hotter conditions on Friday so it wasn’t a great shock to see Massa fail to make the cut for the top ten when the temperature fell on Saturday. The FW38 liked the rain even less and Massa slipped up by passing Gutierrez before the Safety Car line, earning a penalty. His pace on the intermediates at mid-race was good enough to prompt Bottas to go the same way, but as the rain worsened Massa struggled and eventually aquaplaned into a wall.

Valtteri Bottas – Surprised and disappointed to drop out in Q2 after being beaten by Alonso’s McLaren and Grosjean’s Haas. He ran the intermediate tyres for longer than anyone else at the end of the race and impressively kept the show on the road despite slipping up on lap 59. Over the final laps he was on the pace of most of the front runners, but the chance for points had gone.

Daniel Ricciardo – Another driver who felt he had erred on the conservative side on his final run in qualifying. Ricciardo caught a tough break when he fell foul of the little-used rule on pit lane closures having failed to spot the warning boards in poor visibility. He was also struggling with his visor leaking in the closing stages which partly explains why Verstappen made such better progress over the final stint.

Max Verstappen – Was third after his first run in Q3 but an error on his final effort dropped him behind Raikkonen. However the dire conditions provided a perfect showcase for his talents. During the course of the race he explored every millimetre of the Interlagos track in pursuit of extra grip and had overtaken the likes of his team mate, Rosberg and both Ferrari drivers. The gamble on intermediates was understandable, though it cost him second.

Nico Hulkenberg – Surprisingly neither of the Force India drivers beat Grosjean’s Haas in qualifying. But with Hulkenberg just six-hundredths ahead of Perez it seemed both were close to the car’s potential. Hulkenberg was running fourth at the time the race was stopped but fell to 15th when he was called in to replace his wet weather tyres under the Safety Car, the team blaming a puncture. Without that he’d have entered the final laps in third place with Verstappen bearing down on him. His pass on Magnussen, barely on the track with the pit wall coming up at him, was astoundingly brave.

Sergio Perez – Backed up Hulkenberg to put both Force Indias ahead of the two Williams drivers on the grid. By staying out of trouble and staying out of the pits he rose to third place until Verstappen appeared on his tail, and relegated him three laps from home. But Force India vitally outscored Williams with both drivers.

Kevin Magnussen – Lost his way with the car’s balance on Saturday and narrowly missed the cut for Q2. As usual he was one of the most fearless in the wet conditions and always among the first to gamble on intermediates. The conditions didn’t play to the tyres, however, and he finished well out of the points.

Jolyon Palmer – Despite being held up by Ocon in Q3 Palmer claimed a place in Q2. He was lining up to pass Kvyat at the restart on lap 19 when Raikkonen crashed in front of them and Palmer was caught out by Kvyat slowing down. The resulting contact ended the Renault driver’s race.

Daniil Kvyat – Was the quicker of the two Toro Rosso drivers in qualifying for once but his tidy lap didn’t trouble the top ten. He sacrificed track position with an early pit stop for intermediates, then was hit by Palmer. His team reckoned the damage to his diffuser cost Kvyat around 20 points of downforce, and he also picked up a puncture. The two Red Bulls ejected him from the points positions late in the race and in the final laps Alonso and Bottas demoted him too.

Carlos Sainz Jnr – Found little improvement in Q2 and dropped out along with his team mate. However he was on great form in the race. Unlike Kvyat he didn’t pit for intermediates and this paid off handsomely: he was fourth with five laps to go. While Verstappen’s pass was probably inevitable he let Vettel go by rather too easily.

Marcus Ericsson – Only did a single lap in final practice due to a power unit problem. Nonetheless he beat his team mate in qualifying by a few hundredths. However in the race he quickly paid the price of trying to run the intermediates – he crashed within two laps of putting them on.

Felipe Nasr – Blamed traffic and a misfire for a lap which left him last on the grid until Ocon was penalised. Another driver who steered clear of the intermediates, Nasr spent a significant chunk of the race in sixth place before Hulkenberg and the Red Bulls demoted him to ninth. He never lost sight of his goal, however, which was to beat Ocon and grab Sauber’s first points, which he achieved.

Fernando Alonso – Bounced back from a technical fault in second practice with a fine performance in qualifying. He beat Button by half a second in Q1 and went on to reach the top ten. He pounced on Perez superbly at the start and beat the Force India to the line. However his switch to intermediates a few laps later dropped him back into the pack. By the final restart he was back up to eighth, but he blew his chances of a better points finish with a spin. He salvaged the final point by taking Button, Magnussen, Wehrlein, Bottas, Kvyat and Ocon in the sprint to the flag.

Jenson Button – This was a horrible weekend for Button with no obvious upside. Having been tenth in the warmer conditions on Friday he dropped out in Q1, prompting him to claimed “there’s definitely something not right”. He was still mystified after coming in last in the race.

Pascal Wehrlein – After a difficult Friday he was rejuvenated on Saturday and out-qualified Ocon, albeit by the tiny margin of five thousandths of a second. Given Manor’s lack of downforce it was no surprise neither driver wanted to try the intermediates, and by the stoppage both had risen into the top ten. Wehrlein slipped back more quickly, however, and a gap of almost 15 seconds had opened out between the pair by the end of the race.

Esteban Ocon – Dropped back to last on the grid by a penalty for impeding Palmer. However in his eighth grand prix – and first wet one – he gave a fine account of himself and only dropped out of the points places two laps from home. Staying off the intermediate tyres helped and it was striking that Verstappen’s former F3 rivals was one of few other drivers exploring the outer edges of the track in pursuit of more grip.

Romain Grosjean – Switching to Carbone Industrie brakes produced a better feeling “right from the beginning” for Grosjean, but delivering seventh in qualifying was well above what the team expected. But Sunday was a crushing disappointment: crashing before the race has even started was a rare flashback to 2012-specification Grosjean.

Esteban Gutierrez – Qualifying was typical of his season: while Grosjean dazzled with his Q3 run, few noticed Gutierrez had only been a tenth off him in Q2. Fine margins are amplified in the midfield. His race was a frustrating affair as an MGU-K fault compromised his power delivery problems under braking and while cornering. Then the MGU-H packed up and a visibly furious Gutierrez vented his frustration at team principal Guenther Steiner. The team had already announced Gutierrez will not be driving for them next year.