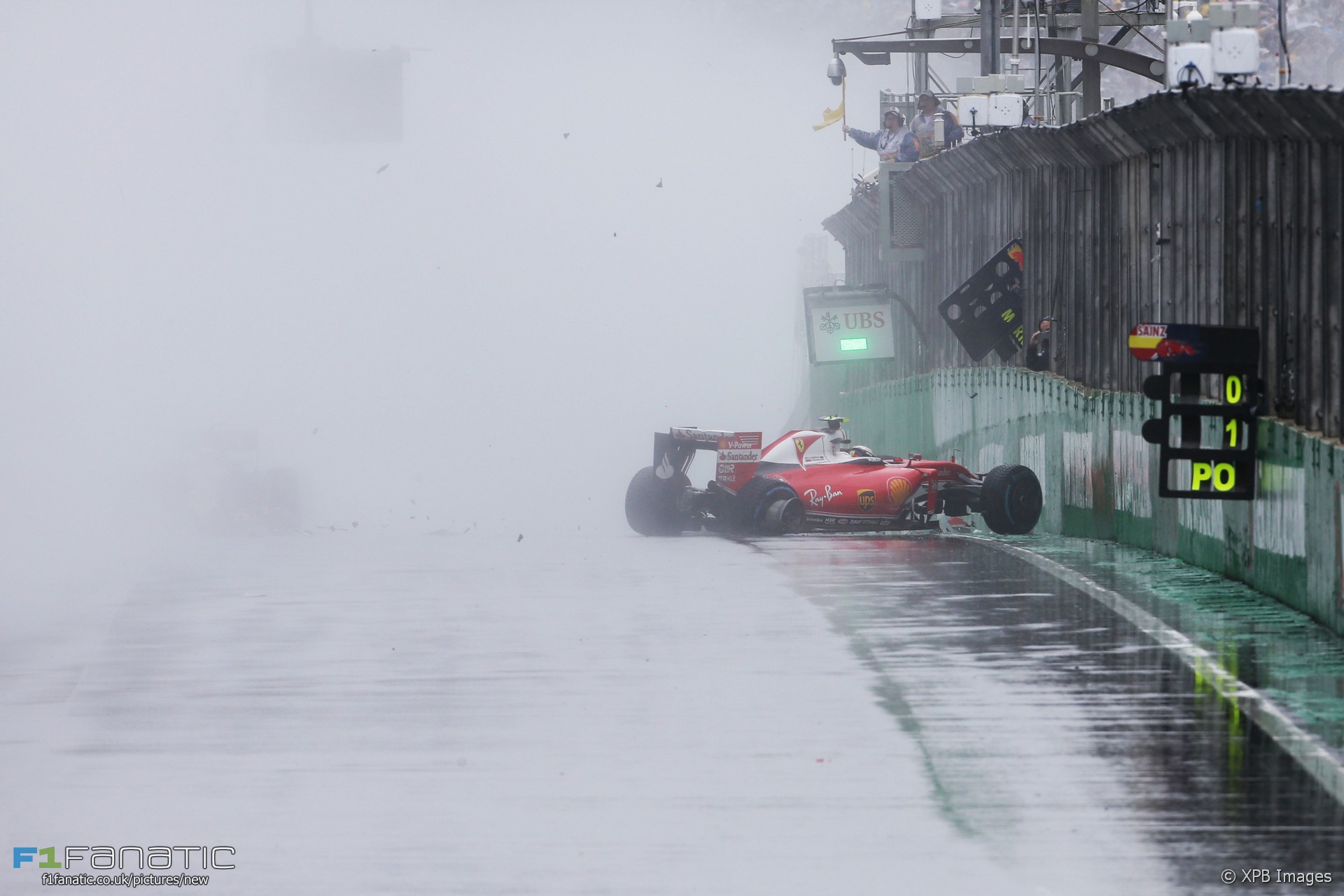 Which is the most dangerous corner on any track in Formula One? Turn 15 at Interlagos, the curved left-hander which brings the cars onto the pit straight, has to be a top contender.

There is no kerb on the inside, just a painted strip of asphalt. Drivers take it with two wheels on the track, the rest of the car straddling the green run-off.

To their left, the drivers pass a head-on barrier which separates the track from the pit lane. They whistle past just metres away at over 320kph (almost 200mph).

The track owners made the best of a difficult job when they revised this section of track two years ago. But the confines of the track leave them with little scope for major change.

The consequence of a puncture or suspension failure at this point on the track don’t bear thinking about. The pit entry barrier is amply padded but the deceleration involved in hitting it would be huge.

And while it’s daunting enough in the dry, in wet weather the spray from leading cars amplifies the danger exponentially. During Sunday’s race F1 had more than one near-miss right here.

When the drivers trailled around behind the Safety Car pre-race turn 19 was one of two corners Jenson Button singled out as the biggest trouble spots.

“Visibility is non-existent,” he told his team on the radio. “Lots of standing water everywhere.”

“But the corners that really matter are turn five and obviously the last corner. Because obviously they’re completely blind as well with the spray.”

The race got underway but as the rain worsened a heavy crash for Marcus Ericsson at the similarly quick turn 14 brought out the Safety Car.

Meanwhile the rain continued to build and the slight banking at turn 15 was causing small rivers to flow across it, as Button reported on the radio. “The problem you have in the last corner, there’s so much running water all the way across the circuit,” he said. Despite growing concerns from the drivers about the conditions – Max Verstappen said he felt like he was “driving a boat” – the race restarted. But not for long.

As the cars reached turn 15 at racing speeds for the first time the two Mercedes passed through unscathed but Kimi Raikkonen’s Ferrari snapped out of control and struck the barrier on the right.

For a sickening moment Raikkonen was facing the pack rushing towards him. Only by swerving right at the last second did Esteban Ocon avoid a nightmare nose-to-nose shunt.

Meanwhile another astonishing near-miss was unfolding just a few metres away. As the pack slowed to avoid the carnage ahead Jolyon Palmer, running last, was trying to pass Daniil Kvyat on the inside of turn 15.

With Kvyat on his right and the turn 15 barrier coming up on his left, the unsighted Palmer was fortunate to avoid a much more serious accident. “The visibility was so bad that I couldn’t even see past my steering wheel,” Palmer recounted afterwards. “I didn’t see where the corner went, I knew that there was the pit wall and pit lane somewhere. I just couldn’t see anything.”

On the radio a furious Sebastian Vettel, who had just dodged his team mate’s crashed car, said the conditions were “mad”.

“We need to stop the race,” Vettel urged. “It doesn’t work. How many people do you want to crash? I nearly crashed into Kimi in the middle of the straight. Couldn’t see anything.” Unsurprisingly the race stopped.

The wet conditions made what was already one of F1’s most dangerous corners into an even greater risk on Sunday. The combination of surface water and dire visibility eventually tipped the balance from acceptable challenge to unacceptable hazard.

The line between the two conditions is narrow. Some have been quick to criticise race director Charlie Whiting and slow to appreciate the difficulties of getting this call right. Erring on the side of safety, particularly in the light of events at Suzuka two years ago, must always be the way to go.

Later on when the race resumed Nico Hulkenberg performed a dazzling feat of bravery at turn 15. He placed his car exactly where Palmer had his near-miss as he dived between Kevin Magnussen and the pit barrier to gain a position on a still-soaked track.

One of F1’s paradoxes is we want to be dazzled by these acts of driving brilliance but we also understand drivers must be protected from unacceptable risk. In Brazil F1 trod that fine line and thankfully emerged unscathed.