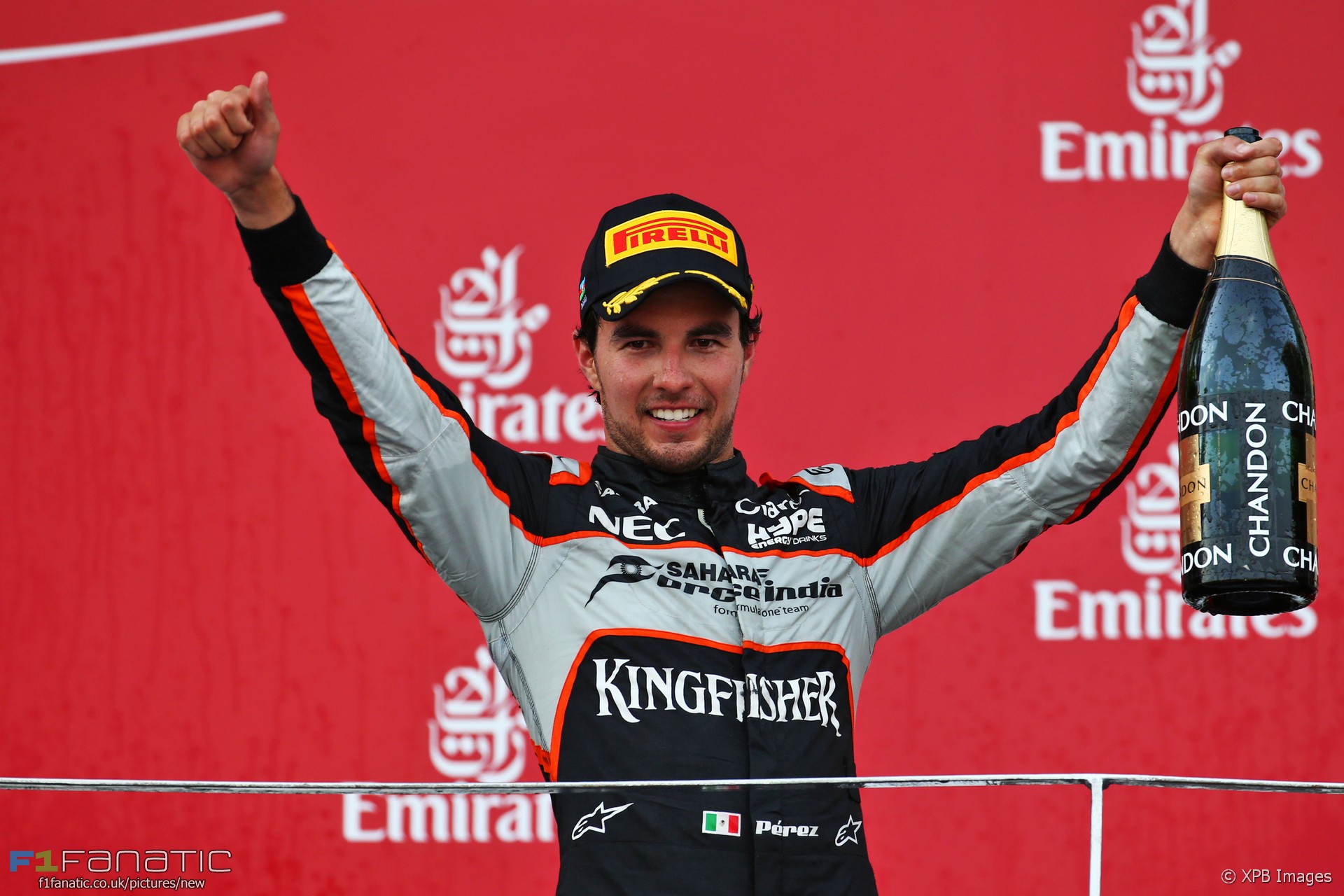 Sergio Perez’s F1 career continued its post-McLaren recovery in his third season at Force India as he made two appearances on the podium.

Pin-sharp strategy served him well in Monaco as he made an early switch to slick tyres to sustain his advantage at the sharp end of the field.

Force India enjoyed their strongest weekend in Baku and Perez delivered another third place but a better result was available. A crash during practice led to a gearbox change which meant he started seventh instead of second. However he still had the beating of team mate Nico Hulkenberg.

This was true more often than not in races, though Hulkenberg enjoyed a greater margin of superiority in qualifying. This remains an occasional weakness for Perez – Pascal Wehrlein’s Manor knocked him out in Bahrain – but he has clearly raised his game compared to previous seasons.

It was nip-and-tuck between the pair all season but they avoided any costly run-ins – even when they scrapped furiously for position at the start of the season finale.

Force India was not ordinarily capable of holding onto places among the front runners. Perez proved a good judge of when not to waste time trying to beat quicker cars, as in Malaysia and Japan where he ran third early on but kept his eye on the bigger-picture goal of keeping the Williams pair behind.

As usual Perez could be relied upon to stretch his stints when needed giving him a useful strategic edge. He used this to good effect in Spain, beating Massa, and salvaged a result in Singapore with two long stints as well. But this wouldn’t have been necessary had it not been for an eight-place grid penalty due to a careless yellow flag infringement.

Mistakes like this, however, have become the exception rather than the rule for Perez. When the chequered flag fell in Abu Dhabi he’d taken his tenth consecutive points score and done his bit to secure Force India’s best-ever championship finishing position.

Perez is an interesting case. I feel he’s a bit too good for a midfield team like Force India, but I’m not sure if he’s good enough to challenge for championships.

Scored two impressive podiums and helped Force India to reach their best-ever season, so there’s not much more he could have done.
@Diceman

What’s your verdict on Sergio Perez’s 2016 season? Which drivers do you feel he performed better or worse than? Have your say in the comments.

Australia – Started one place ahead of his team mate but fell behind Alonso immediately and had to follow the McLaren for the first stint. “Being stuck in the dirty air destroyed my tyres,” he said. It was a case of deja vu at the restart when Button got in front of him, and towards the end he had to manage high brake wear and dropped out of the points.

Bahrain – Said he was “unlucky” to drop out in Q3 after being eliminated by an improvement by Wehrlein. He made a terrific start, gaining six places, then threw it away with a careless move on Sainz on lap two. “I was in his tow and when I went onto the marbles on the inside I just couldn’t stop the car enough,” he admitted.

China – Overnight changes on Friday produced a better-handling car for Perez and he pronounced himself happy after taking seventh on the grid. That became fourth after lap one and he was still ninth after the Safety Car, but he lacked the pace to get back where he had been and lost so much ground he ended up out of the points in another disappointing weekend for Force India.

Russia – Another driver who tends to go well at Sochi, a solid qualifying performance from Perez plus Vettel’s misfortune yielded Force India’s highest starting position of the season so far. However he incurred a puncture at the start and had to limp back to the pits. He rose back through the field to claim points for ninth but spent his final stint stuck behind Grosjean and Magnussen.

Spain – Force India’s only representative in Q3, Perez took ninth on the grid which became seventh at the start. He finished there too, holding off Massa at the end despite having six-lap-older tyres. Did well to make a two-stop strategy work with such an early first stop.

Monaco – Backed up Hulkenberg’s qualifying effort with a time less than two-tenths slower than his team mate’s. His race strategy was pin-sharp, jumping ahead of Vettel and Hulkenberg at the first round of stops and getting on to slick tyres a lap before most of the front runners to get into a podium position. He duly delivered an excellent third place for the team.

Canada – Took ‘new tyre pole’ after being edged out of Q3 by his team mate. He tried to make an alternative strategy work, starting on the soft tyres, but found it difficult to warm them up and ended up stuck behind the McLarens. He also got away slowly from his second pit stop and fell behind Kvyat, but passed him to take the final point.

Europe – Would have started on the front row but a crash during final practice left him with a broken gearbox which had to be replaced, earning a five-place grid penalty. Nonetheless from seventh he gained places from Massa and Kvyat at the start, then took the fight to Raikkonen after delaying his first pit stop, passing the Ferrari on the final lap. Third was great, but clearly second was possible.

Austria – A vexing weekend: Alfonso Celis drove his car in first practice, which made the rain in the second session a greater inconvenience. A suspension failure in Q1 kept him from taking part in the second phase of qualifying. And then in the race a brake failure put him out with two laps to go.

Britain – Concentrated on his long-run pace and narrowly missed the cut for Q3. However he jumped up to fourth after delaying his switch to intermediate tyres and being helped by the Virtual Safety Car. He was never going to keep Ricciardo behind but Raikkonen might have been kept at bay had he not spun.

Hungary – A mistake in Q2 cost him dearly: he ended up a second and a half slower than Hulkenberg and missed the cut for the top ten. He also had problems in the pits: after abandoning an attempt to run a single-stop race the team weren’t prepared for his second visit, costing him over eight seconds. But even without that he wouldn’t have beaten Hulkenberg to the final point.

Germany – Was eight-thousandths of a second away from starting two places higher on the grid. But his start was very poor, wheelspin losing him seven places and leaving him with a lot of work to do to get back into the points. He picked off Sainz and Grosjean with little difficulty on his way back through the field, and capitalised on Alonso’s slowing McLaren to claim the final point. His team mate was almost half a minute up the road, however.

Belgium – Reckoned there was no more than a tenth of a second left in the car after claiming a place on the third row. At the start he slipped to eighth avoiding the turn one carnage but he made up places from Grosjean and, after the restart, Kvyat. He pressed on the second stint, passing Massa and Alonso, and wasn’t too far behind his team mate at the end.

Italy – The VJM09s couldn’t match the low-drag FW38s at Monza: Perez was four-tenths off Bottas in qualifying. Although he benefited from Verstappen’s slow start he was demoted by the Red Bull driver at the end of a lonely race.

Singapore – Failing to obey double waved yellow flags earned him a total grid penalty of eight places and cost him a start inside the top ten. This error was the prelude to a fine race performance in the usual Perez mould: stretching out two long stints to claim a useful points haul for the team.

Japan – Held third in the opening stages and the four cars which passed him by the end of the race were all much quicker. He might have stood a chance of keeping Raikkonen behind for longer had Palmer not got in the way. Despite a strong start to his final stint there simply wasn’t the pace in the car to jump the delayed Ricciardo.

Malaysia – Produced another of his much-improved qualifying performances: seventh was as high as the car could manage. He took advantage of the turn one incident to briefly hold third place, but could do nothing to keep Verstappen and Raikkonen behind. Bottas also jumped him via his free pit stop.

United States – Sat out first practice while Alfonso Celis drove. He didn’t make the cut for Q3, partly due to a damaged brake disc, but enjoyed the benefit of ‘new-tyre pole’. He was hit from behind by Kvyat on lap one but recovered to eighth and could’ve been higher had he not pitted shortly before the VSC.

Mexico – Not as quick in the Friday afternoon session as the track cleaned up and the situation was much the same on Saturday: He was half a second off Hulkenberg as he missed the cut for Q3. In the race he got snookered behind the Williams drivers while his team mate beat both of them.

Brazil – Backed up Hulkenberg to put both Force Indias ahead of the two Williams drivers on the grid. By staying out of trouble and staying out of the pits he rose to third place until Verstappen appeared on his tail, and relegated him three laps from home. But Force India vitally outscored Williams with both drivers.

Abu Dhabi – A slight power loss was his only concern on Friday and Hulkenberg pipped him by 0.018 seconds in qualifying. Having been rebuffed by Hulkenberg at the start he settled into eighth place but lost pace at the end of the race and came under pressure from Massa.