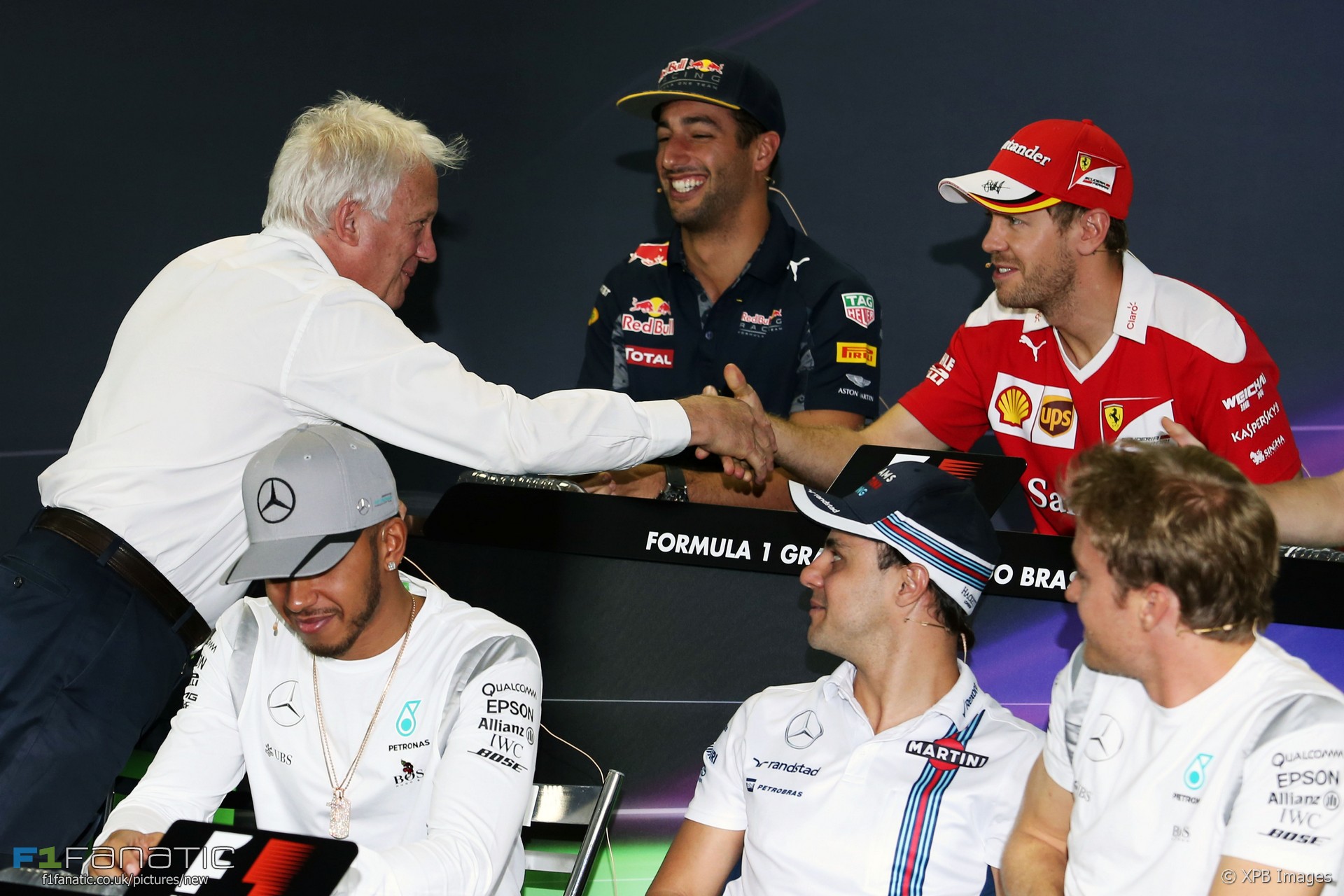 Team radio messages again provided some of the most dramatic moments of the season in 2016.

During the first half of the year we didn’t get to hear much from them as Formula One Management drastically reduced the amount of radio material being broadcast compared to previous season. That changed heading into the summer break, in a move which coincided with some of the controversial restrictions on radio messages being relaxed.

Here are some of the most memorable moments from this year’s races on the team radios:

Lewis Hamilton wasn’t the first driver in 2016 to be frustrated by Max Verstappen:

But Verstappen had other problems later in the race:

There was jubilation for Haas after a great performance by Romain Grosjean:

Manor found themselves consistently at the top of the speed traps thanks to their new Mercedes power units:

The good times continued to roll at Haas but not all of Grosjean’s radio messages would be this positive later in the year:

With Ferrari president Sergio Marchionne watching in the pits, Sebastian Vettel needed a good explanation for why he’d just crashed into his team mate:

But after his third consecutive win Nico Rosberg was riding high:

And after a fine podium finish things were looking up for Daniil Kvyat:

Vettel did not conceal his disappointment at being rammed out of the race by Kvyat:

A power unit fault hampered Hamilton in qualifying and more problems hit both Mercedes’ drivers during the race:

The blue flag guidelines were toughened up later in the year as the front runners complained slower cars were holding them up:

In his first race for Red Bull, Max Verstappen scored a stunning victory:

Felipe Nasr did not agree with Sauber’s call for him to let Marcus Ericsson by. His frustrated team mate then tried to pass at Rascasse, with inevitable consequences:

A frustrated Ricciardo saw victory slip away due to a fumbled Red Bull pit stop:

The unflappable Kimi Raikkonen gave his race engineer a dose of reality:

Meanwhile his team mate was getting increasingly agitated after losing the lead due to a questionable strategy call:

New regulations which prevented engineers from assisting the drivers became a hot topic when Lewis Hamilton spent a significant portion of the race stuck in the wrong engine setting:

More angst at Mercedes as their drivers collided on the final lap:

With a lot of standing water at the start of the race drivers faced the tricky decision about which tyre to switch to after the Safety Car came in:

Sure enough the conditions quickly caught some of them out:

Rosberg was the first driver to fall foul of the team radio restrictions and receive a penalty. Mercedes only discovered he was under investigation when they heard Red Bull discussing it on their radio:

Verstappen couldn’t resist pointing out how easily he was keeping up with his team mate:

Jenson Button followed Rosberg in receiving a penalty for receiving assistance on the radio, but this latest controversy proved the final nail in the coffin for this contentious rule:

Not for the first or last time, Mercedes became concerned Hamilton was compromising Rosberg’s race:

Behind the leaders Raikkonen saw red as he tried to pass Verstappen:

From the British Grand Prix teams were able to listen in to all of their rivals’ messages in real-time, including everything not broadcast on television by FOM. At times they passed on what they heard to their drivers:

Rosberg was the latest driver to come off second-best in a scrap with Verstappen, though only after the stewards intervened:

One particular driver distinguished himself by being a problem for the front runners:

Raikkonen and Verstappen resumed their battle from the Hungaroring and the Ferrari driver’s wrath proved too much for FOM’s censor:

Despite the encouragement, Valtteri Bottas wasn’t able to get past Alonso:

Alonso’s race was ruined by an unusual problem at his pit stop:

Even Ricciardo’s engineer marvelled at his spectacular, long-range pass on Bottas:

Raikkonen sprang a surprise attack on Hamilton to take third:

But Hamilton regained the place by under-cutting the Ferrari driver with an extra pit stop:

Without a trace of irony, Alonso was surprised not to benefit from a Safety Car in the closing stages:

Carlos Sainz Jnr lost his engine at the start but fortuinatley Ferrari’s power unit can be restarted using the MGU-K:

Having been blamed by the Ferrari driver for a first-lap collision in Belgium, Verstappen made sure everyone knew who was at fault in Malaysia:

Australia and Bahrain must have seemed a long time ago for Grosjean as a brake problem put him out:

The engine failure which cost Hamilton victory struck while he was lapping traffic:

Hamilton’s slow start eventually proved to be the final nail in his title hopes:

A strong qualifying performance by Gutierrez was wasted when he spun trying to pass Sainz. Soon afterwards he lost his place at the team for 2017.

There were a lot of frustrated drivers by the time the chequered flag fell:

Perez was the latest driver to by hit by Kvyat at the start:

Verstappen produced another of his radio gems:

Though perhaps he should have paid a bit more attention to what he was being told:

Verstappen’s retirement caused a Virtual Safety Car period which scuppered his team mate’s chance of finishing ahead of Rosberg:

A pit stop error at Ferrari was compounded by radio confusion which led to Raikkonen retiring:

FOM experimented with talking to the drivers on the formation lap:

Nasr was again instructed to let Ericsson past and this time he complied – eventually:

Vettel’s anger boiled over on the radio at the end of the race as he felt Verstappen needed to let him past and Ferrari incorrectly told him his rival had been instructed to. Vettel later apologised for his remarks aimed at race director Charlie Whiting:

In a new low for Haas, Grosjean crashed on his way to the grid in the very wet conditions:

The race was red flagged after Raikkonen lost control of his car on the straight. When Kvyat slower in avoidance he was hit by Palmer:

As if the conditions weren’t bad enough Gutierrez, who now knew he had lost his Haas seat, had car problems to contend with:

After much deliberation Verstappen decided to fit full wet weather tyres and drop to the rear of the field. It proved the prelude to an epic drive:

The fight for the championship came down to a question of whether Hamilton could force Rosberg into slipping up and finishing outside of the top three. As he slowed down more and more, Mercedes grew increasingly fearful they would lose their shot at victory.

In a final escalation, executive director Paddy Lowe came on the radio and ordered Hamilton to speed up. He continued to ignore them, and Lowe later admitted he refused to repeat the futile instruction.

Hamilton won the race but Rosberg won the world championship:

*Lap: Refers to lap message was broadcast on. There may be a delay between messages being said and being broadcast. PR = pre-race; FL = formation lap; VL = victory lap.