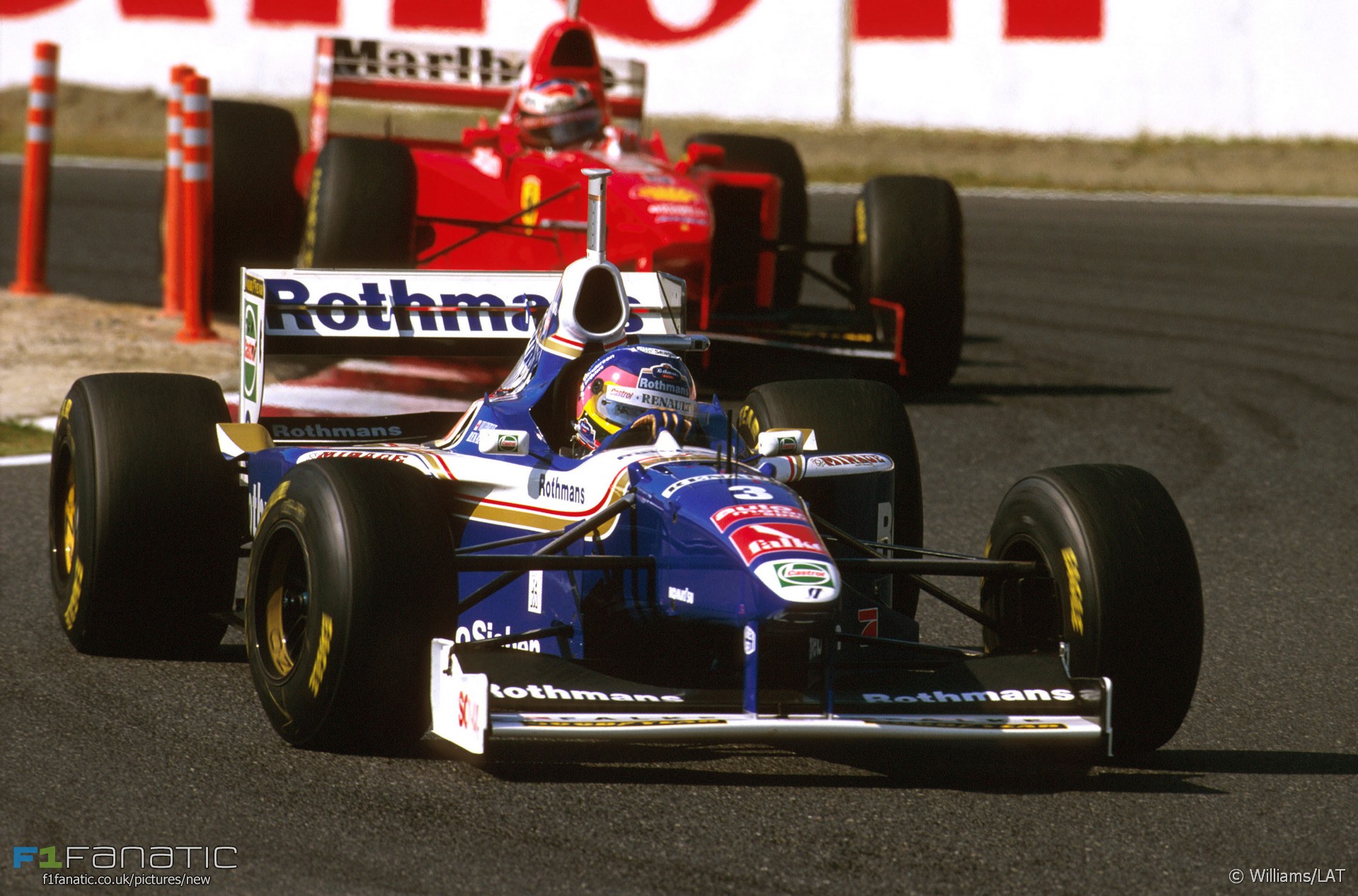 Formula One’s grand plan to slash lap times by five seconds will be put to the test when the 2017 cars hit the track in a few weeks.

Major revisions to the aerodynamics and tyres have been signed off in order for F1 to achieve this target. But 20 years ago teams found a similar leap forward in performance without such dramatic changes being necessary.

The 1997 season saw lap times plummet across the board by multiple seconds. It was also the year of the tense championship showdown between Jacques Villeneuve and Michael Schumacher, and the most recent championship successes for the Williams team.

This memorable F1 season will be featured in a series of articles throughout the coming year on F1 Fanatic.

Goodyear had Formula One to themselves between 1992 and 1996. With no rival manufacturer on the scene, the American giant had no incentive to push F1 tyre manufacturer to the limit.

That all changed when Japanese rivals Bridgestone announced their intention to enter F1 in 1997. After lengthy tests throughout 1996 they were well-prepared for their arrival, and testing showed their wet weather technology in particular had raised the bar.

But Goodyear responded and a new tyre war began. Compounds became ever softer and throughout testing it was clear the new cars were going to be vastly quicker.

At the Circuit de Catalunya the pole position time fell by a massive four seconds compared to the previous season. Formula One hasnt seen anything like it since:

Alarmed by the increase in speeds, the FIA swiftly introduced regulations cutting the car widths from 2,000mm to 1,800mm for 1998 in order to make wing sizes smaller. That change is now being reversed for 2017.

Heading into 1997 one team was expected to lead the championship charge. But Williams, the standard-setting team of more or less the past five seasons, faced growing threats to their superiority.

Renault, the manufacturer whose engines had powered Williams to their victories, were poised to withdraw at the end of the year. Williams’ days as a manufacturer engine partner were numbered.

For now at least they had one year left of full works support. And in Adrian Newey’s FW19 the engine had a chassis worthy of its potential. But as the year began the man behind the car was no longer showing up to work at the factory.

Newey had grown unhappy with his lack of authority over some areas of the team, including driver choices. He had been particularly unhappy with the the decision to eject Damon Hill at the end of what turned out to be his championship-winning 1996 campaign. Newey’s contract ran until 1999, but he and the team were heading for divorce.

The decision to drop Hill, who had taken eight of the team’s dozen victories the season before, meant for the fifth year running Williams began the season with a change in the line-up. Villeneuve had impressed in his rookie campaign and stayed within reach of Hill until the final round. He was joined by Heinz-Harald Frentzen, whom many believed had the potential to rival Schumacher as Germany’s top driver.

The team also faced a serious and potentially disruptive distraction from the business of racing. On February 20th a court in Imola convened to try six people on accusations of causing the death of Ayrton Senna in his crash during the San Marino Grand Prix three years earlier. Williams, Head and Newey were among those on trial.

Williams also knew their rivals would be stronger in 1997. “If Ferrari gets on top of its reliability problems over the winter, which it will, then Michael could disappear next season,” Frank Williams reflected in mid-1996.

Of the four races Williams failed to win that year Schumacher won three. Heading into 1997 the arrival of Ross Brawn at Maranello alongside Schumacher and designer Rory Byrne gave the impression the team was turning into a ‘red Benetton’ with the title-winning potential to match.

With Marlboro’s money gone to pay Schumacher’s retainer, McLaren appeared in silver West colours for the first time, though not before the MP4-12 made its test debut in striking McLaren papaya orange. They and Mercedes went into their third year together still looking for their first joint victory.

Benetton had gone from champions with Schumacher in 1995 to non-winners the following season with Gerhard Berger and Jean Alesi at the wheel. However the Renault-powered B197 had posted competitive lap times in testing.

While these front-runners remained with Goodyear, the other race-winners of 1996 had gambled on a switch to Bridgestone. Ligier had also been bought and rebranded by four-times world champion Alain Prost during the off-season. Olivier Panis, the shock winner of a chaotic 1996 Monaco Grand Prix, remained their lead driver.

For the second time since Jordan’s debut season six years earlier a Schumacher was at the wheel of one of their cars. The expectation was that Ralf, the reigning Formula Nippon champion, would at least do more than just one race. Eddie Jordan had opted for a largely untried line-up by pairing him with Giancarlo Fisichella, who arrived from Minardi with just a handful of starts under his belt.

That left Martin Brundle reluctantly confined to a role in the commentary box alongside Murray Walker. For British television viewers, F1’s move from the BBC to ITV meant one more innovation for 1997, and not a welcome one: in-race advert breaks.

A tale of two newcomers

Prost wasn’t the only multiple champion starting afresh as a team owner. Jackie Stewart was too, and he was doing it the hard way, having formed the all-new Stewart team with his son Paul.

Joining them on the grid for the first time – in theory at least – was a new entry from Lola. But while Stewart attracted factory backing from Ford, Lola had to make do with dated customer units based on the models which had taken Schumacher to his first championship three years ago.

As far as the powers-that-be were concerned, both new entries were afforded the standard F1 welcome. Which is to say, neither were entitled to a share of the prize money or travel concessions afforded to their rival teams.

The Lola project proved short-lived but through a few changes of hands Stewart ultimately became one of today’s powerhouse teams. That lay well in the future as the teams headed to Melbourne for the first race of 1997.