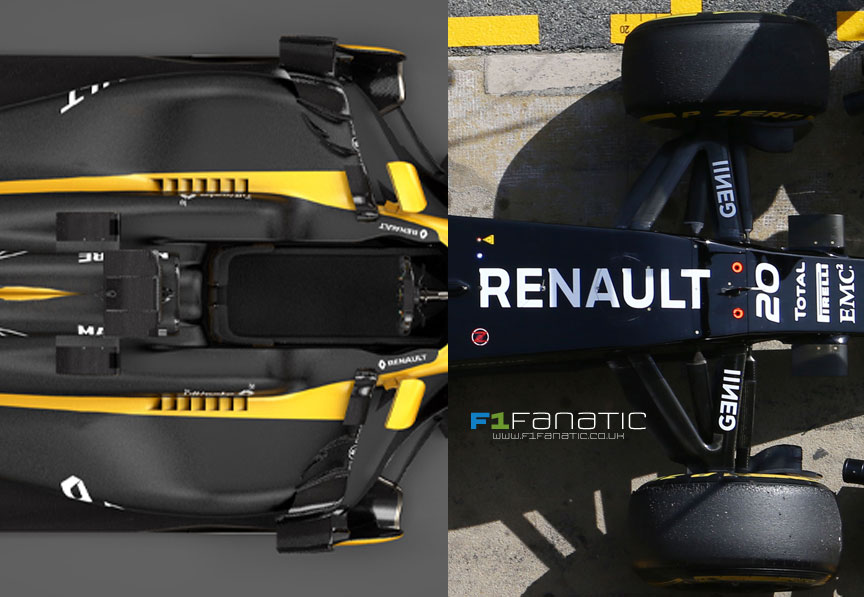 Renault is seeking major gains with its new F1 car as it begins its second season since taking over from Lotus. Compare their new chassis with last year’s using the interactive images below.

Use the slider below to transition between images of Renault’s new 2017 RS17and last year’s RS16. Note some images may have been altered for ease of comparison and should not be used as a reference for measurements.

The typical differences between this year’s cars and the old, narrower ones are already becoming familiar. The black bodywork on the RS17 – similar to the same used on their pre-season test car last year – masks some of the car’s details, but not the major changes.

The wider nose on the 2017 Renault is closer in style to the version they used in the second half of last season.

Renault said during the launch of the car today that it contained some interim parts which will be replaced before the tests at the Circuit de Catalunya. The floor in particular looks quite basic, lacking the slot gaps seen on their car 12 months ago which were also visible on the Sauber launched yesterday.

The RS17’s sidepod wings are an obvious example of where the greater aerodynamic freedom for designers has allowed them to create more extravagant shapes. A larger but fairly simple bargeboard has also appeared but the T-tray section has gone.

Renault have displayed their new car with a considerable degree of rake, accentuated by the shark fin on the engine cover.

The front-on view gives the clearest impression of the differences between the new and old cars.

As well as its wider and delta-shaped front wing, Renault’s new car also has large flow-conditioning bodywork where the nose meets its wing.