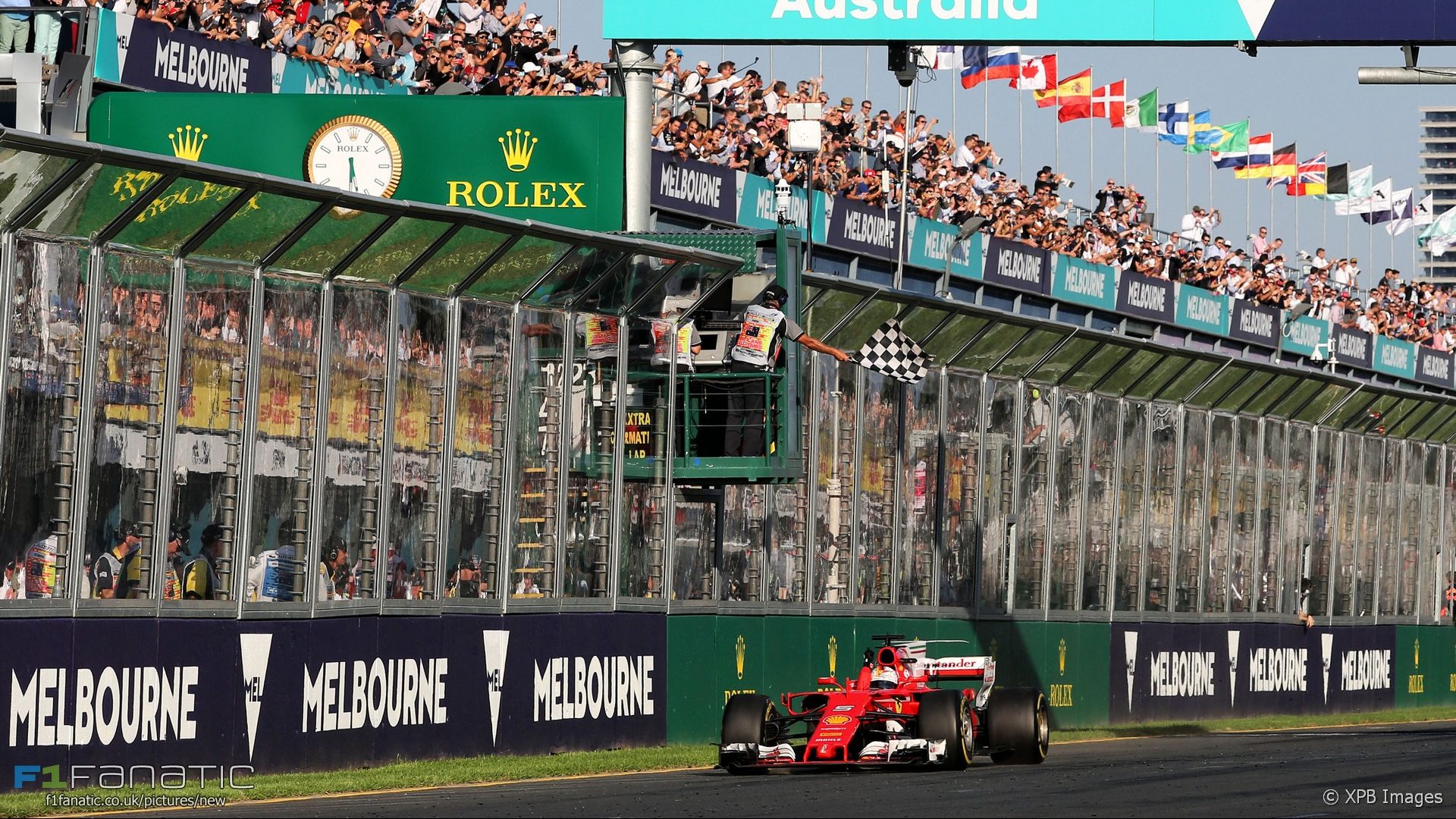 Sebastian Vettel took just one hour, 24 minutes and 11.672 seconds to win yesterday’s race, trimming 4.085 seconds off the previous shortest race, held in 2004. But he was helped by the fact this year’s race was shortened by one lap after the first attempt to start it was abandoned.

So this wasn’t the fastest race ever seen at Albert Park. That remains the 2004 race, run over the full 58 laps and won by Michael Schumacher at an average speed of 219.010kph in his Ferrari F2004.

Vettel averaged 215.408kph over yesterday’s 57 laps, making this the third-quickest Australian Grand Prix at Melbourne. The 2007 race, won by Kimi Raikkonen at an average speed of 215.893kph, was also quicker.

Yesterday’s race was also the first time since 2013 this race has run Safety Car-free, as the record-setting 2004 race also was.

Lewis Hamilton started the Australian Grand Prix from pole position for the sixth time, tying Ayrton Senna’s record. It was also his and Mercedes fourth in a row at this track.

However Vettel came through to win for Ferrari on Sunday, raising the prospect of a much closer championship fight this year than in recent seasons. This was only the ninth time Mercedes have been defeated in the 60 races since the V6 hybrid turbo engine formula was introduced, and the first time anyone other than them or one of their drivers has led the constructors or drivers championships for almost three years.

Formula One’s most successful team took their 225th victory a year and a half since their last one. The sports next most prolific winners, McLaren, don’t look like adding to their 182 wins any time soon.

Vettel is the fourth-highest driver on the all-time winners list with 43. He needs eight more to catch third-placed Alain Prost.

The race winner also made a late bid to claim fastest lap. He wasn’t the only driver hunting for fastest lap, however – both Max Verstappen and Daniil Kvyat were trying to take it, but it went to serial fastest lap collector Kimi Raikkonen. He now has 44 which is more than any driver in F1 history bar Schumacher, who has a whopping 77.

Hamilton headed the field in the opening laps which was the 100th time he’d led a grand prix. He is the second driver to reach a century of races in the lead, having started 189 races. This is another tally led by Schumacher, who led 142 of the 306 races he started.

His new team mate Valtteri Bottas reached the podium on his debut for Mercedes. It’s the tenth time Bottas has appeared on the rostrum, the others all having come at Williams.

For the third year running only one Red Bull started the race from the grid. Daniel Ricciardo was stuck in the pits when the race began yesterday, while in the two previous years Daniil Kvyat hit trouble before the start was given. Ricciardo’s troubles meant he failed to extend his run of 17 consecutive points finishes.

Kvyat did get to start the race this time and made it to the chequered flag. His record in Melbourne therefore stands at two ‘Did Not Starts’ for Red Bull and two ninth places for Toro Rosso. His 58th race start also meant he surpassed Vitaly Petrov as Formula One’s most experienced Russian driver. The pair are the only Russians ever to race in F1.

Sixth place for Romain Grosjean in the race twelve months ago was a stunning debut performance for Haas. This time Grosjean took sixth in qualifying, giving them their highest grid position to date. However they were the only team not to get either of their cars to the chequered flag in the race.

Finally, Esteban Ocon scored his first point on his debut for Force India. He is the 334th driver in F1 history to join the points-scorers, though of course there are many drivers who previously finished in sixth to tenth positions but did not score because a different points system was used.