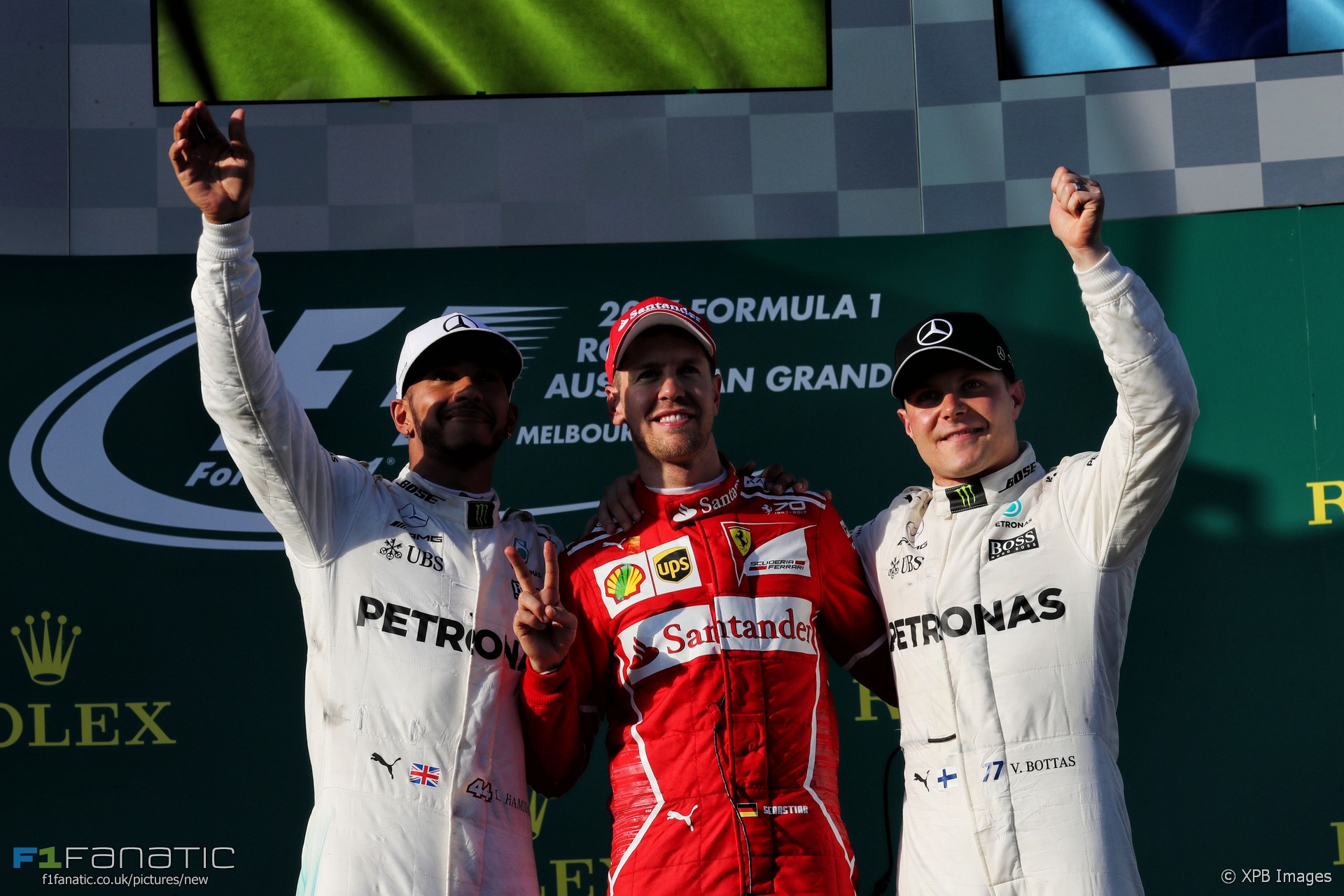 In the round-up: Sebastian Vettel says he believes Mercedes are still the team to beat despite Ferrari winning the first race of the season.

Lewis Hamilton: 'My hunger to be F1 world champion has doubled' amid Sebastian Vettel challenge (The Telegraph)

"I still believe that Mercedes are ahead. After all, they have been in front for the past couple of years."

"When you are lacking top speed so much it's hard to defend yourself."

"No, there is no search, but obviously we are looking at every option to recover and catch up because we are definitely not in the position that we expected to be and wanted to be."

Lauda puts Bottas on a level with Rosberg (Reuters)

"I don't think he would have been worse than Nico if Nico would have raced here."

Hamilton decides to race without a personal trainer (BBC)

"My discipline has definitely gone up in terms of my training and how specific I am with my diet."

"It's personality-building. I think you just lose some and you win some."

Webber: Alonso could leave McLaren before end of '17 (Autosport)

"He's frustrated. He doesn't even want to finish seventh or sixth. Maybe points for Stoffel is quite nice. Fernando is not interested in points."

"There are lots of people out there who have been talking about it being a boring race and that there wasn't being enough overtaking, but I think that’s wrong. I really enjoyed the Grand Prix, I thought there was a story to it in the way we used to have."

"As a spectacle, the race was an indictment of F1's reliance on over-complicated technology that is a known barrier to close competition."

Re 1 lap incident, no hard feelings between me and @KevinMagnussen . He came up after the race and apologised so we're all good #ME9 #F12017

A good view of Ferrari's wing flaps flexing under braking and acceleration through turn one. https://t.co/J6CSYgYMO1 #F1 #AusGP pic.twitter.com/LdUwUQtUxK

@f1fanatic_co_uk FIA needed to impose in having a constant profile section, as required in the Centre Line, to reduce torsional deflection !

Well that's new for me, being able to get my buddies on to pit lane! Really nice to see that the fans are properly part of the atmosphere pre and post race at Nascar, Cheers @jimmiejohnson for sorting us out. #libertymedia I'm sure will be bringing this atmosphere and fan involvement to @f1 as there's always room for improvement even at the pinnacle of motorsport. @nascar @f1 #fans #racing

Pigmer was among those who got a closer look at the cars than they expected on Sunday:

I was at the race yesterday and it was awesome! admittedly lacking overtakes but cars are beautiful… just remove the extra wings on top of the shark fins!

Regarding the track invasion, it was a bit surprising, they had an official race control car going around with green lights, so fans started to rush the track. Problem was that this car was in front of the F1! Hopefully there was no incident and it got me great shots of Vettel celebrating by ecstatic fans!

I was too late to be at the podium but ended up right in front of scrutineering garages with all cars parked there: it’s a fan dream coming true, we could have almost touched the cars! Again, got so many close up shots and it was quite striking to the see how intricate the Ferrari and Mercedes are. The Red Bull looks pretty much ‘unfinished’ to me a bit like past years Ferrari that were a bit too tidy to perform.

Last but not least, it’s a very welcome sight to finally have so many colors on the grid!
Pigmer

Tony Brise was born on this day 65 years ago.

63 comments on “Vettel: “I still believe Mercedes are ahead””