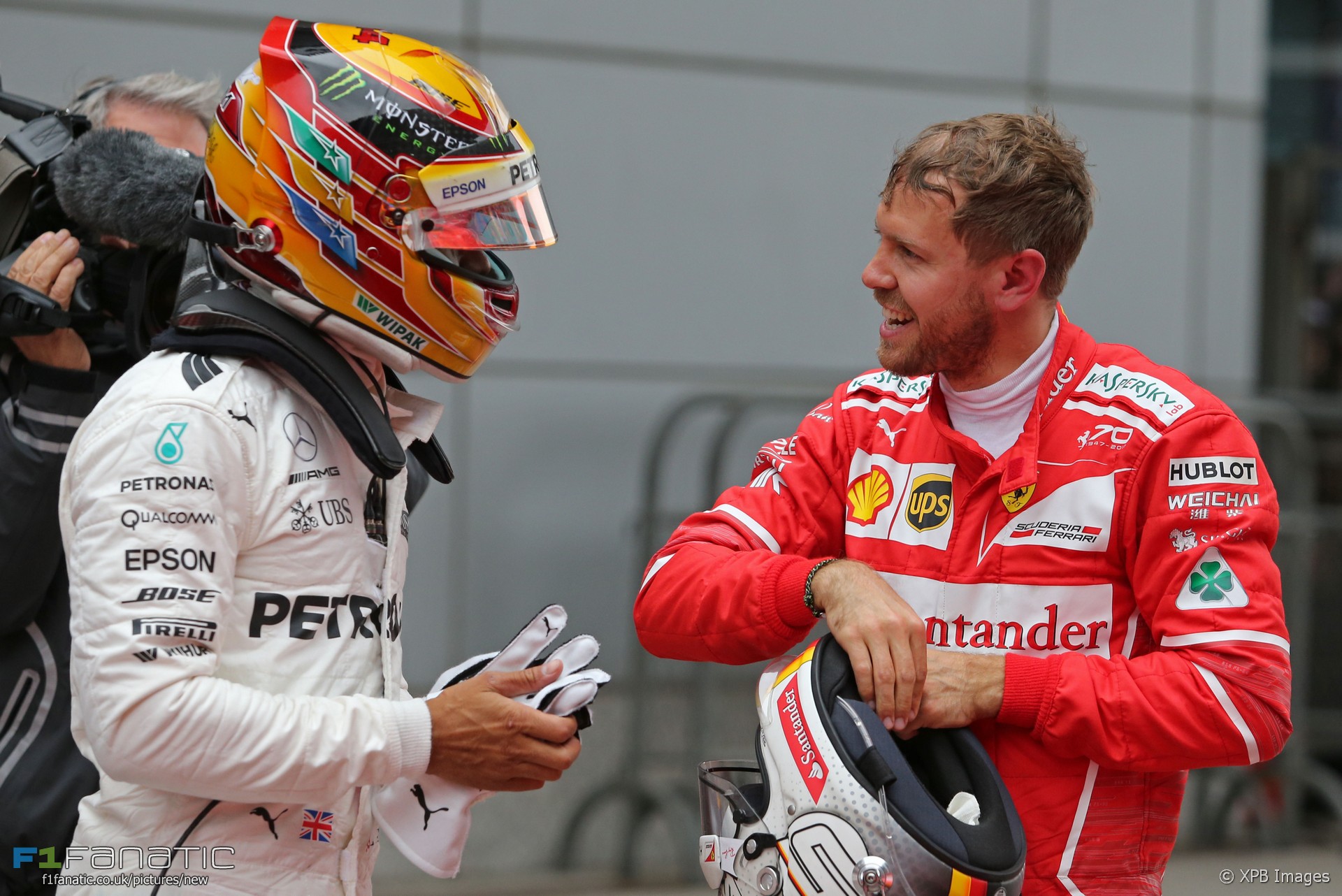 Two races in and it’s one win apiece for Lewis Hamilton and Sebastian Vettel. It’s game on in the world championship.

The bare statistics show that Hamilton led every lap from pole position and set fastest lap on his way to victory. But this was no crushing win in the manner of his many triumphs for the team over the past three years.

The track was damp, but perhaps more importantly it was cold. After a warm day of running on Saturday and a wet day of virtually no running on Friday, the start of the Chinese Grand Prix was a leap into the unknown for everyone.

The upside was that wasn’t as wet as it could’ve been. The vast band of rain which passed across Shanghai stayed just to the south of the circuit, sparing it the full dousing which had been forecast earlier. The initial predictions had been so grim some had even suggested the race should be brought forward to Saturday.

So 19 cars lined up on the grid with all on intermediate tyres apart from the gutsy Carlos Sainz Jnr, who opted for super-softs. Having seen his gamble Jolyon Palmer decided it was the way to go, and dashed into the pits for slicks of his own.

Up at the front Hamilton started from pole position and if he felt Vettel was closer to him than usual it was because the Ferrari driver had lined up well to the left of the normal starting position. It made no difference, however: Hamilton and Vettel led Valtteri Bottas to turn one in grid order while behind them Daniel Ricciardo manoeuvred around the outside of Kimi Raikkonen for fourth.

The other Red Bull made even more startling progress. From 16th on the grid Verstappen ended the first lap just three places behind his team mate. “I had a good start but I got a bit blocked because the two cars in front of me went into the middle so I had to back off, but still I gained one or two positions,” he explained.

Through the opening corners Verstappen nosed his Red Bull into every available gap. “In turn one I got another car, then inside turn two, another car, outside turn three there was
space.”

“Yeah, nine cars is quite a lot on one lap but of course very happy that it worked,” he grinned afterwards.

At the end of lap one Nico Hulkenberg became the next driver to plump for dry-weather tyres. While Sainz and Palmer took super-softs, Hulkenberg went all-in on his gamble and fitted a set of softs, giving him a potential shot at completing the race distance without pitting again. But the gamble was doomed to fail almost immediately.

Halfway around the first lap Lance Stroll had aimed at the apex of turn ten as if Sergio Perez’s Force India was already alongside him. The contact fired the Williams into a gravel trap and out of the race, and the Virtual Safety Car was needed for its recovery.

This was a disaster for Hulkenberg. “In damp conditions if you can’t push you lose all the tyre temperature,” he explained. “I lost all grip. It was like driving on ice and I spun a few times.”

“The VSC pretty much ruined our strategy and so the race,” he rued. But others spied an opportunity, including Ferrari, who brought Vettel in for softs. Daniil Kvyat followed suit as did the the Haas, Force India, Sauber and McLaren drivers.

As the VSC period ended, Mercedes were now running first and second. But a pit stop under green flag running would inevitably drop them back behind Vettel. So it was to their considerable relief when Antonio Giovinazzi crashed at the final corner for the second time in five laps.

With debris spread across the pit straight the Safety Car was summoned to guide the pack through the pits. The remaining drivers on intermediates wasted no time in coming into to take on slicks including Hamilton, who kept his lead.

Team mate Valtteri Bottas was not so fortunate, however. A slow pit stop cost him ten seconds, dropping him to sixth behind Ricciardo, Raikkonen and Verstappen.

He exacerbated that with an error of his own. While limbering up for the restart and trying to scrub heat into his front tyres, the W08 snapped into a spin on the straight approaching turn 11. Seven more cars passed the Mercedes, the first of which was Vettel, no doubt grateful that what could have been a major obstacle had removed itself from contention.

Bottas was only the most visible example of a problem all the drivers were dealing with. Getting any heat into the tyres with track temperature around 14C was proving immensely difficult. Those like Bottas on the soft tyres were finding it hardest of all.

Hamilton, with the benefit of clean air ahead of him, coped well. Ricciardo behind him was feeling the benefit of super-soft tyres but he would soon struggle as well. Raikkonen behind him on softs could only look on as Verstappen drove around the outside of him at turn seven. He also complained of poor delivery from his power unit at turn 12.

Vettel spent the next 11 laps queued behind his team mate. To begin with he wasn’t losing any time to the race leader, but that soon changed.

On lap 11 Verstappen dived past Ricciardo for second. “A fair move” was how Christian Horner described it, suggesting this hadn’t been orchestrated by the Red Bull pit wall. Hamilton soon lowered his pace in response to Verstappen and by lap 19 he was pulling clear.

Vettel had lost over nine seconds to the race leader by now and took action to ensure he lost no more, taking Raikkonen at turn six. This spot, outside of the two DRS zones, again proved a good spot for overtaking. Vettel’s next pass there was one to savour.

On lap 21 he appeared on Ricciardo’s tale, obliging the Red Bull driver to defend, and made for the outside line. Ricciardo left him little more than a few millimetres but it was enough for Vettel to emerge having captured the inside line for the next corner. The pair touched wheels briefly but it was a parting gesture as Vettel put a lock on third place.

Now the complexion of the race changed. Vettel had only Verstappen between him and the race leader. Hamilton, taking no chances, put his foot down and lowered his pace by more than six-tenths of a second. Thoughts of making it to the end of the race without a further stop were abandoned.

Vettel, now matching Hamilton’s pace, took second with ease when Verstappen locked a wheel at turn 14. Now it was between the Mercedes and the Ferrari for the victory. But unlike in Australia Hamilton had a ten-second advantage most of which had come not from the Safety Car period but the time Vettel lost behind Raikkonen.

Raikkonen surrenders to the inevitable

Verstappen was the first to commit to a second stop following his lock-up. Ricciardo did the same four laps later and took a turn of front wing which vastly improved his car’s handling. Vettel and Hamilton then did the same.

This restored Raikkonen to second place and his team were confident he could finish in third place without making a further pit stop. Similar tactics served him well in Spain last year, but this time Raikkonen wasn’t having any of it.

On the 37th lap his time took a turn for the worse, suddenly over half a second slower than before. This tipped the balance on the Ferrari pit wall and Raikkonen was brought in for a set of super-softs. He easily dispensed with Sainz but ran out of time to catch the Red Bulls, even as a rejuvenated Ricciardo applied increasing pressure to his team mate.

Sainz also lost sixth to Bottas, who had been delayed again on his second visit to the pits when he was dropped from the jacks too early. The Toro Rosso was the only non-Mercedes, Ferrari or Red Bull to finish the race on the lead lap. “Without the Safety Cars, I think he would’ve achieved an even better result,” said team principal Franz Tost. “He certainly would have deserved it.”

Kevin Magnussen took eight ahead of Sergio Perez, the Force India driver catching him at four seconds per lap at the end following a late stop for fresh rubber. Esteban Ocon again contributed one point to Force India’s tally.

Despite making up eight places over the course of the race, Romain Grosjean left China point-less and thoroughly disgruntled. But even that paled in comparison to Fernando Alonso.

The McLaren driver had once again done a first-rate job with third-rate equipment. He briefly held sixth at one stage and although the ever-drying conditions increasingly exposed the McLaren’s weaknesses, he was on course for a points finish until a drive shaft failed.

Alonso made sure the whole world got the picture by telling his team he was the “fastest in the corners” and scoffing at the fact Bottas had fallen behind him at one stage. He couldn’t have made his point with any less subtlety had he added a ‘driver for hire’ sticker on the side of his MCL32.

Through the final stint Vettel pressed on in pursuit of Hamilton, but the gap between the two was more than enough for the Mercedes driver to stay ahead.

“The last ten or 12 laps he was doing a 35.6 and I was doing a 35.8,” said Hamilton, “and it was very hard to get to where he was.” But not impossible: with two laps to go Hamilton set the race’s fastest lap, a mere 0.045 seconds quicker than Vettel was capable of.

Still Vettel took heart, telling his team on the radio “we were quicker”. Could he have won the race without the Safety Car?

“I think Lewis was quick, full stop,” he said “Today we finished second, very happy with that, we take it, good points.”

“More than that, and much more valuable than that, it was an entertaining and fun race for me. I had some overtaking. It was difficult to get close to the car, like last race you felt the effect but here I think it’s a better track to overtake and yeah, it’s the way it should be in my opinion: you need to make it stick so it shouldn’t come for free. You shouldn’t just open the flap and sail past. It was good fun. I can’t complain.”

There was a surprising degree of bonhomie between the top three on the podium. All had reasons to be cheerful: Hamilton had won a race on a day when his closest rival was potentially quicker; Vettel has good cause to believe he will win several more races this year; and Verstappen again underlined his status as F1’s ‘coming man’.

As in Australia, it all bodes rather well for the rest of the season.