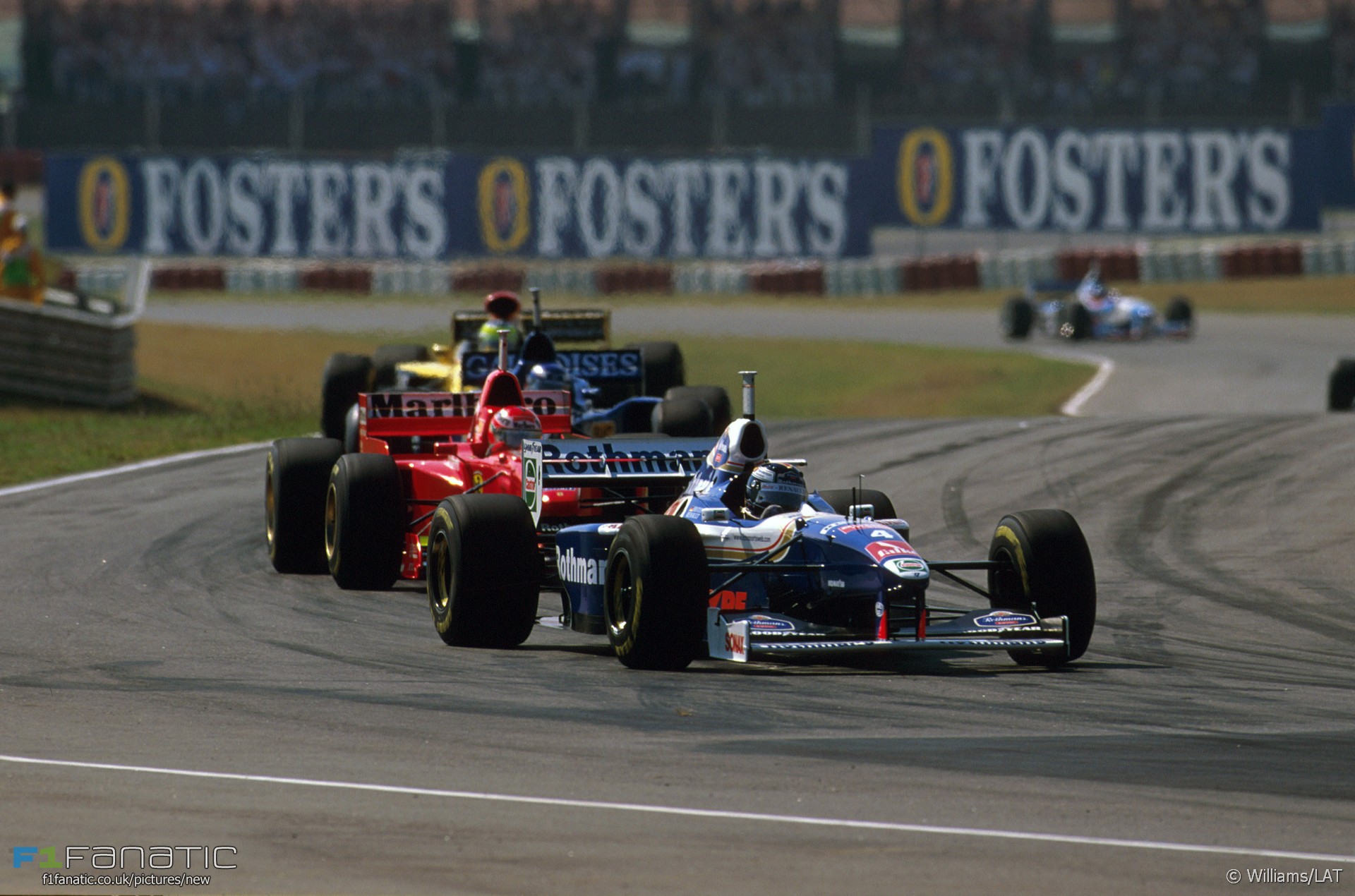 Jacques Villeneuve and Eddie Irvine had clashed publicly following their first-lap collision in the season-opening races of 1997. At round three they met on the track again, but this time they fought for the victory.

The F1 field arrived at the third race of the 1997 season with Villeneuve and David Coulthard tied at the top of the points standings. But Coulthard didn’t figure in the fight for victory in Argentina.

Nor did the driver who was widely expected to be Villeneuve’s strongest rival for the 1997 crown, Michael Schumacher. He and Coulthard were eliminated before the first lap had been completed.

Formula One returned to a Buenos Aires circuit which had been partly resurfaced in a bid to remove the bumps which drivers had complained vociferously about the previous year. The changes were somewhat successful, and along with the softer tyres brought by Goodyear and Bridgestone, contributed to a six-second drop in lap times compared to the previous year.

But the Buenos Aires circuit had been drastically shortened since Reutemann had last raced on it in the early eighties. The layout was short, cramped and slow. Backmarkers Tyrrell turned up with unusual mine-winglets mounted on top of their sidepods, swiftly dubbed X-wings, in order to increase downforce and traction.

Jos Verstappen dragged his Ford V8-powered Tyrrell onto the eighth row of the grid which he shared with another future F1 father, Jan Magnussen. But the latter had been spectacularly out-qualified by his Stewart team mate.

The performance of Bridgestone’s tyres had thrust the tail-enders into the hunt for points and Rubens Barrichello had delivered a superb lap on them to put his Stewart fifth on the grid. Team owner Jackie Stewart had promised him a Rolex watch if he qualified in the top ten at either of the opening two races. Having qualified 11th for both, Barrichello was given one more chance at the prize and delivered. He tossed his old watch out of the car as he arrived back in the pits.

But Barrichello wasn’t the highest Bridgestone-shod qualifier on the grid. That accolade went to Olivier Panis, who had already taken his Prost to a surprise podium finish in Brazil two weeks earlier. With hotter conditions forecast for race day which would suit the durable Bridgestones, Prost had a genuine shot at victory.

Arrows, however, were struggling once more and unable to join the Bridgestone party. World champion Damon Hill lined up a glum 13th while team mate Pedro Diniz brought up the rear of the field.

Hill’s former team swept the front row though once again the gap between his replacement, Heinz-Harald Frentzen, and Villeneuve was significant. Frentzen had a good reason for his sub-par performance, however: he was suffering so badly from gastroenteritis he had to be put on oxygen after his practice runs on Friday. And Villeneuve, who took the 100th pole position for Williams, was developing similar symptoms.

Schumacher continued to labour with his Ferrari and joined Panis on the second row. “I don’t think to beat Villeneuve at the moment,” he said after qualifying. “I have other problems to think about at the moment.”

His younger brother Ralf in the Jordan joined Barrichello on the third row. An improved performance by Eddie Irvine netted him seventh on the grid alongside Johnny Herbert’s Sauber.

The first of the McLarens scraped onto the fifth row alongside Giancarlo Fisichella’s Jordan. Having won in Australia the team struggled dreadfully with the Buenos Aires bumps. Mika Hakkinen only managed 17th after a spin in qualifying.

“I feel like death today” Villeneuve admitted ahead of the race. He finally alerted FIA medical chief Sid Watkins to his predicament an hour before the Sunday morning warm-up. Watkins gave him a strong dose of anti-diarrhoea medication. To Villeneuve’s relief he felt well enough after the warm-up that Watkins’ mischievously suggested alternative course of action – a judiciously-placed champagne cork – was not required.

Villeneuve kept his lead at the start but chaos broke out behind him. Schumacher swerved sharply towards Panis, banging wheels with the Prost. The Ferrari driver then tangled with Barrichello at the first corner, the pair coming to a standstill.

Barrichello scampered off and, after two visits to the pits under the Safety Car for repairs, was able to press on. Schumacher’s Ferrari stopped near the racing line and a marshal quickly began waving a red flag to signal a race stoppage so it could be recovered. But race control decided otherwise, summoning the Safety Car instead. This meant Schumacher’s race was over. Furious, he stormed back into the Ferrari motorhome without removing his helmet.

“It would have been to our benefit to have a red flag,” rued Ferrari’s Ross Brawn afterwards, “but the way they handled it was fine.” The FIA didn’t entirely agree, fining the race organisers $10,000 for the marshal’s errant flag-waving.

Coulthard also went no further in the race, his McLaren having sustained terminal damage. The race restarted with Villeneuve leading Frentzen, Panis, Irvine and Fisichella. Hill had dodged the spinning cars to hold an unexpected sixth, pursued by Herbert and the sole remaining Schumacher.

The race lost another of its German runners soon after it restarted. Frentzen had been slow to leave the grid on the formation lap due to a fuel hose problem and had been lucky to reclaim his position on the front row. His luck expired on the race’s sixth lap when a faulty seal caused his clutch to disengage.

In his place another car suddenly appeared in Villeneuve’s mirrors. Despite a slow puncture from his first-lap contact with Schumacher, Panis was flying in the Buenos Aires heat. He reeled off the fastest lap on the seventh tour, cutting Villeneuve’s lead to a second.

The Williams then steadily began to draw away but it soon became apparent he was planning on three pit stops to Panis’s two, and therefore had less fuel on board. But three laps before Villeneuve’s first pit stop the Prost came to a stop with an electrical fault.

“I’m very disappointed but I think the team made a very good job this weekend,” said Panis. “I’m sure I’ll win a race after.” Following his early promise in this race and his podium finish in Brazil, it seemed likely indeed.

The demise of Panis left Irvine as Villeneuve’s nearest challenger. He made his first pit stop two laps after the Williams and emerged, usefully, in clear air. Irvine got his foot down and was flying when he inherited the lead on lap 39 as Villeneuve pitted again. Five laps later the Ferrari made its final pit stop, Irvine dramatically sliding through the chicane on the way in. But Villeneuve still had a dozen laps to build up enough of a lead to stay ahead.

Despite the heat and his condition, Villeneuve got the job done and emerged from his final pit stop with Irvine in his mirrors. But the chequered flag was still 16 laps away and Irvine ducked and weaved behind the Williams every step of the way, hoping the ailing Villeneuve would slip up. Despite also struggling with rear brake locking and a gearbox which occasionally shifted by itself, Villeneuve duly took his second win of the year.

Behind them an all-Jordan battle for third was resolved in controversial fashion. Schumacher had successfully passed Hill around the outside of turn one after the restart. But an optimistic lunge on his team mate on lap 24 forced Fisichella out. Schumacher went on to claim his first podium finish in only his third start, but the celebrations were muted at Jordan’s 100th race.

Jean Alesi tried to mimic Schumacher’s pass on Hill but contact was made between the Benetton and the Arrows. Diniz, Verstappen, Hakkinen and Barrichello all profited from the collision, although the Stewart driver retired soon afterwards with a hydraulic problem.

Hakkinen close on Herbert but the Sauber driver held him off at the flag for fourth place by a mere four-tenths of a second. Gerhard Berger took the final point for sixth after passing Diniz, The other Benetton came alive in the closing stages and set the fastest lap.

He was followed home by team mate Alesi and the race’s three other finishers: Mika Salo, Jarno Trulli and Magnussen – the latter recording Stewart’s first finisher.

But the race winner had reasserted himself as the championship with a gritty victory. It was hard to ignore the shades of his father’s celebrated final victory at Jarama in the way Villeneuve had kept a quicker car behind him over the final laps. Appropriately enough, Villeneuve had now matched his father’s tally of six grand prix victories.