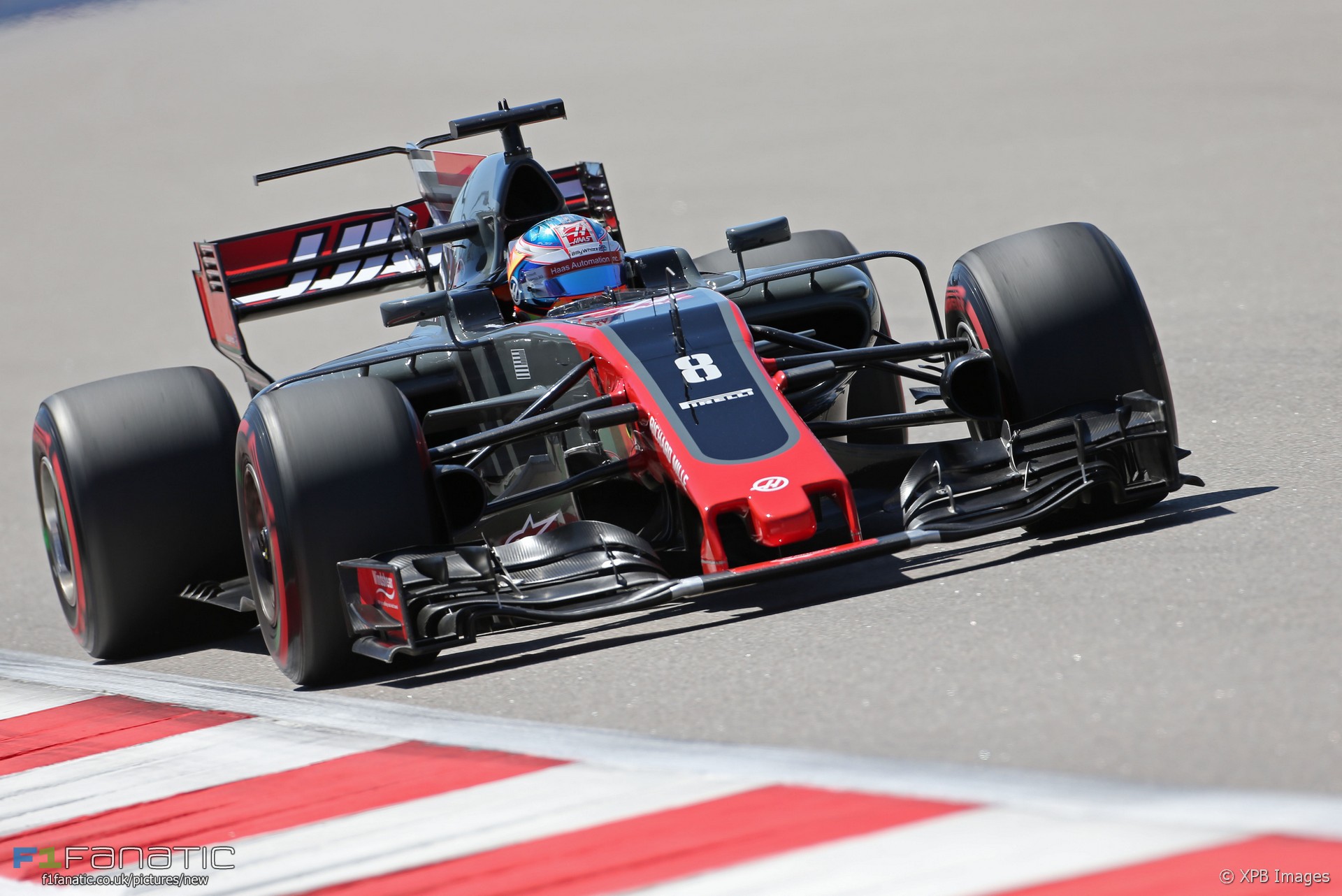 It was a frustrating day for Romain Grosjean but he at least got to do more laps than Sergey Sirotkin. Here’s Friday’s team radio highlights.

Alonso told to “use DRS on the main straight”. All the drivers have done installation laps now.

Sergey Sirotkin’s Renault broke down just two laps into the test driver’s first run. He called technical support but despite their best efforts his session was over.

Sirotkin: “I’m out on turn one on the right-hand side.”
To Sirotkin: “Understood. We may try to restart with the MGU-K. Please stand by.”
Sirotkin: “OK.”
“OK Nic – er, Sergey. Can you press the brakes, pull the clutch and press the overtake button, see if it starts the car.”
Sirotkin: “OK it says false…”
“False neutral. So now select first gear and try to drive away.”
Sirotkin: “It’s still flashing and says false gear.”
“Press neutral and then try and upshift to get the gear.”
Sirotkin: “No it doesn’t work it says ‘false gear’. It’s flashing. It doesn’t go to neutral.”
“Try downshifting.”
Sirotkin: “No, it’s doesn’t. None of the buttons…”
“Try the button again. Keeping the clutch pulled.”
Sirotkin: “No it doesn’t feel like it’s going in any direction.”
“OK just keep trying we’ve got about 20 seconds until we have to switch the car off.”
Sirotkin: “Just to let you know the marshals are trying to…
“Yeah we can see you, you’re on the screen Try driving now Nic – Sergey. See if you can select a gear in reverse. OK switch off the car, please, go to P1, please. Sorry Sergey.”
Sirotkin: “OK. No worries.”

“Hamilton: “What’s the wind direction?”
“Tailwind out of two, headwind into four.”

Vettel: “I have some issues with drive-ability. The engine is not firing so let me know. It’s fine but check exit after turn two.”

Romain Grosjean was not impressed when he was told tape had been left on his front brakes.

Grosjean: “I’m really struggling with my rear end.”
“Hi Romain. We need to box now to remove some front brake tape.”
Grosjean: “OK…”
“Yeah it’s not perfect but we’ll just rip this tape off and go again and we’ll try to help you on the rear. So box now.”

“Raikkonen: “I have a lot of vibration from the tyres. It’s hard to see.”
“Understood, Kimi.”

To Stroll: “OK Lance we think the track and the tyres should be at least one-and-a-half seconds improvement for this run.”

Alonso: “Check the first-second.”
“Will do.”

More problems for Grosjean. He had just told Haas “I need some help here, the car is not doing what it’s supposed to do” and was trying to get space for another run when the red flags flew for Esteban Ocon’s broken engine cover.

To Hamilton: “We have reports of debris turn four, right-hand side, just keep an eye out.”

“Some people improved on a second flying lap. We saw what happened with the modes at the start/finish line.”
Ricciardo: “Yeah that’s my bad”

Verstappen: “No, just doesn’t turn.”
“OK, you want to make the adjustment, Max?”
Verstappen: “No it doesn’t work. The rear tyres are too hot, the fronts too cold. It doesn’t matter what I do on the track.”
“OK reverse on I would suggest a further slow lap now mate. Concentrate on cooling the rear tyres.”

Haas arrived in Russia planning to work on a new brake pedal material from supplier Carbone Industrie, but both drivers reported problems. As usual Grosjean was by far the more vociferous.

Magnussen: “The brake pedal is quite long.”
“Is it drive-able?”
Magnussen: “It’s not great but I guess I can drive with it.”
“OK I think it’s too bad. I think we need to come in. Come in, come in.”

Grosjean: “I’ve got nothing. I completely lost it into turn four and three. And then I get into the last sector and I’ve got all the understeer on the planet. What the hell is going on?”
“Understood, OK.”

Raikkonen: “I struggled with the front. It got a bit better at the end of the lap.”

Sainz: “It’s a bit of a disaster with this tyre [soft] at the moment.”

“Hamilton: “Brakes are glazed.”
Copy that. They don’t seem glazed, maybe they’re just cold at the start of the lap.”

“So there could be some improvement: turn 15, 16. 16 apex speed in particular. And still the last corner apex speed.”
Ricciardo: “OK.”

Mercedes’ lap times were surprisingly down on Ferrari’s

“There’s definitely more grip in the tyres if we can just find a way to unlock it.”
Bottas: “Copy.”

“Vettel: “Issues with drive-ability leaving the pit lane.”
Yep we have seen it.”

Vettel: “There’s a smell of burning, check if it’s us or another car.”

Max Verstappen came to a stop towards the end of the session.

“Verstappen: “I lost power.”
“Stop the car, max. Stop and turn off. Ignition one. Ten seconds. P0.”
Hamilton: “I just have no grip, guys.”
Vandoorne: “This is incredible. The Force India that just passed me, it was so far behind.”

“OK so we can box now.”
Grosjean: “What the…”
“Yeah huge rear lock.”
Grosjean: “Yeah but why? I’m on the same line, same everything as the previous lap. Unbelievable.”

“It was a very severe lock when you were holding the brake on. We’re investigating why.”
Grosjean: “Yeah but guys I’ve got understeer everywhere over the lap. And I get into the last corner and out of the blue there’s rear locking. Come on.”

Grosjean: “OK guys so situation is that my brake pedal is very long. I’ve got not efficiency on the brake and as soon as I try to attack a corner a little bit, as I have no hesitation at the beginning, I am completely losing the rear end at the end of the braking zone. I don’t know what’s going on, I don’t know what’s happening but this pedal is soft and when I hit the brake there’s nothing happening.”
“Yep, OK, understood.”

A curious moment at the end of the session for Kimi Raikkonen.

Raikkonen: “There’s a bloke standing in front of me. Move!”
“I don’t know why, Kimi.”