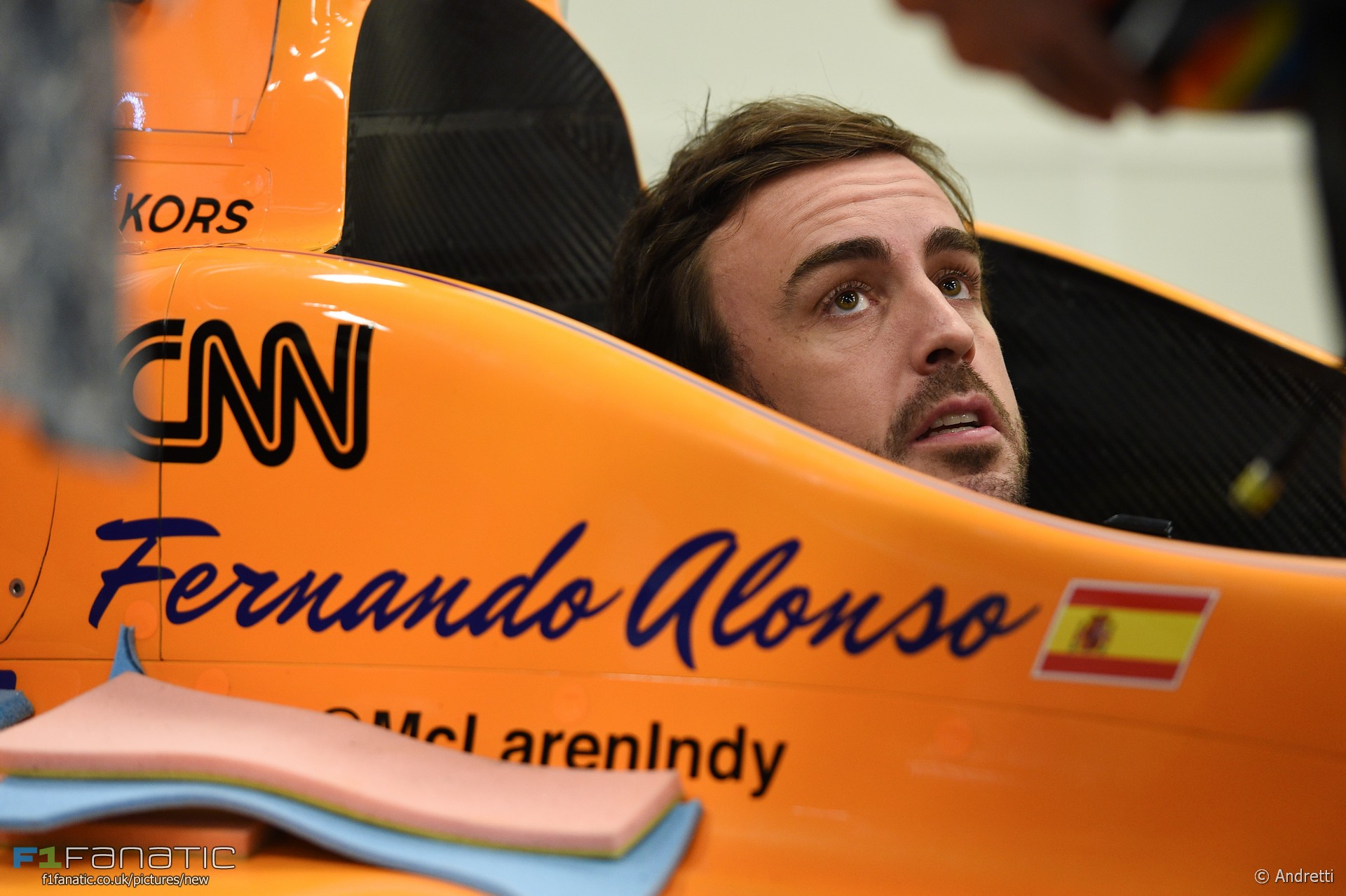 Fernando Alonso says the role of the driver is more important in IndyCar than in F1 following his first test in preparation for the Indianapolis 500.

The McLaren driver completed his Rookie Orientation Programme which is necessary in order for him to be able to compete in the event, by driving a series of laps at maximum average speeds of up to 345kph [215mph].

Afterwards Alonso was asked how the four corners at Indianapolis Motor Speedway compare to the quickest bend in Formula One.

“130R in Suzuka probably is 320 or 330kph [205mph],” said Alonso. “It feels different, I think in Formula One the feeling of just the steering wheel, power steering and all the helps we have it feels a little bit easier.”

“Also the level of downforce, the sophistication of Formula One, gives you a little bit more grip, a bit more predictable car. Here is just more raw, everything is more racing. It’s definitely faster and different.”

“But at the end of the day we all started in go karts, in small categories, probably we miss that kind of feeling when you get to Formula One and you have everything under control, every single millimetre. Here it’s more driver input in different phases of the corner.”

Alonso tried to tackle turn one flat out at his first attempt after team mate Marco Andretti, who shook down his car for him, did the same. But Alonso revealed he found himself backing off involuntarily.

“It was OK I think thanks to the rookie thing,” he said. “The first couple of laps you lift off, then you go in the corner, so you start feeling the grip, the car and you try to follow that target you need to reach at the end of the lap. That was one thing.”

“And then at one point they told me OK, you’re done with all the limitations, you just need to do now 15 laps about 215 [mph]. So run as free as you feel.”

“I knew that Marco was flat out in turn one. So I said ‘I will do flat out now in turn one because the car is able to do it’.”

“So arrived to turn one and I was convinced one hundred percent that I was going flat out but the foot was not flat out. It has its own life, it was not connected with my brain. At the second or third lap I was able to do it.”

Alonso’s next IndyCar test will take place on the day after the Spanish Grand Prix, which is the first day of practice for the Indianapolis 500. The first two hours of the test are given over to the Rookie Orientation Programme which he has already completed. The rest of the race schedule is as follows: