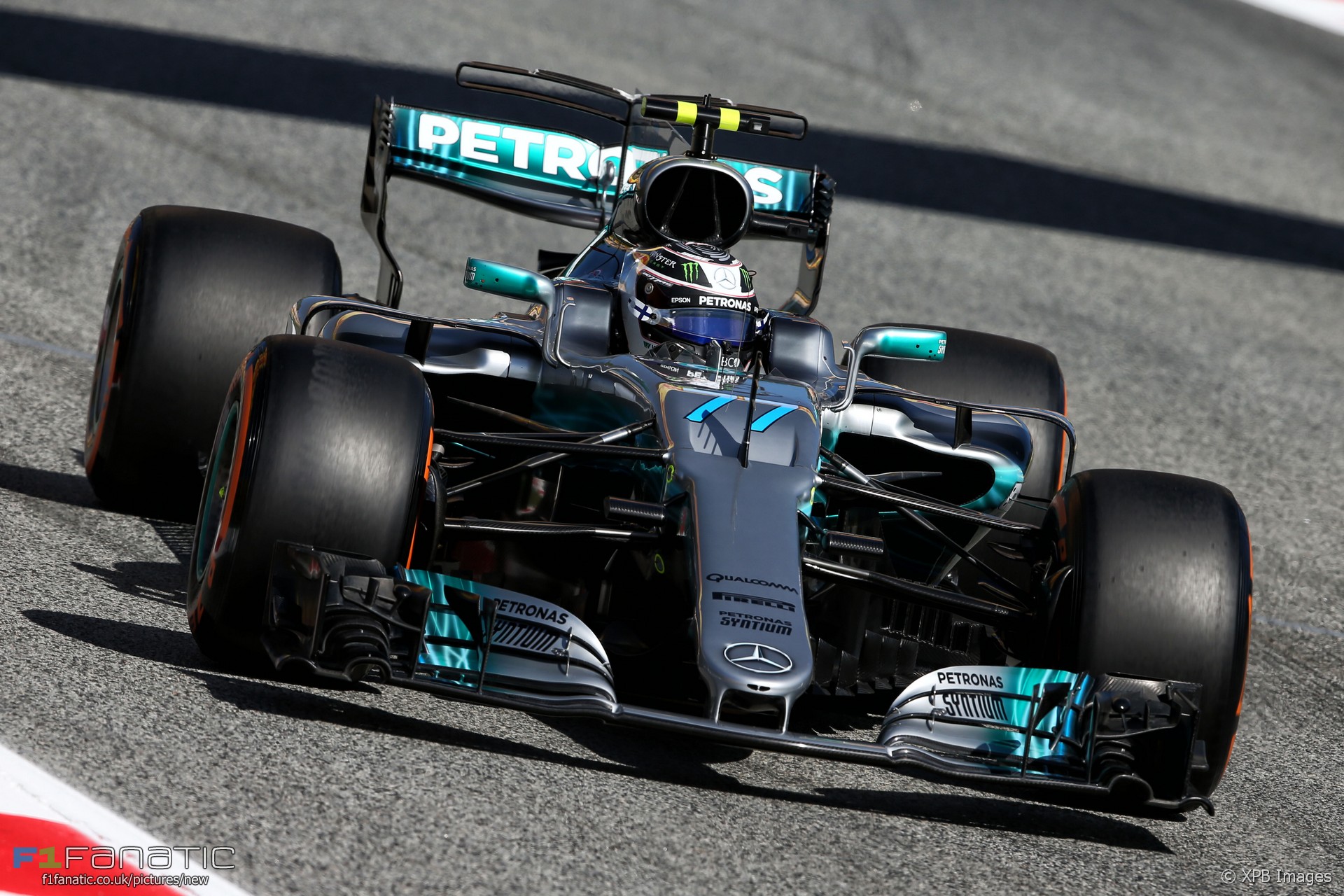 A fifth consecutive front row lock-out for Mercedes in the Spanish Grand Prix looks like a strong possibility after the first day of practice.

Their aggressive upgrade package seems to be working well straight out of the box. And the silver cars look more at home on the very firm tyre compounds.

Add the usual boost Mercedes unlock from their engines in time for Q2 and an all-silver front row looks like a safe bet. But while Lewis Hamilton headed both sessions today he certainly can’t afford to be complacent about a team mate who is less than a tenth of a second behind him.

Ferrari trimmed Mercedes’ advantage on the soft tyres during the second practice session. “First practice was very, very good,” Hamilton explained, “but in second practice the track changed and shifted quite a lot, so it was slippery and quite a lot slower for everyone – especially with the gusts of wind. It was massively challenging.”

A red flag during the middle of the teams’ long run in the second practice session makes it difficult to assess how well the tyres were lasting and what likely strategies we’ll see. But whereas last year’s race was a three/four stop event this year is more likely to be a one/two stop situation.

This could be where Ferrari have the chance to apply pressure to Mercedes on Sunday. As we’ve seen already this season the red cars can usually run longer and harder on a set of tyres, giving them useful strategic flexibility to attack their rivals.

Interestingly, Kimi Raikkonen seems particularly comfortable with his car this weekend. He hasn’t qualified or finished ahead of Sebastian Vettel so far this season – could this be the weekend that changes?

Having ended Friday in Russia almost one-and-a-half seconds off the Mercedes, Red Bull will be able to draw some satisfaction from having more than halved that gap. But we won’t get a true reading on how much faster they are until tomorrow. And they do not appear to have cured their weakness on the harder tyre compounds.

The speed of the Mercedes also has F1 on course to comfortably beat its goal of reducing lap times by five seconds compared to 2015. Lap times in second practice were six seconds inside those from the reference year and over three seconds quicker than last season. Rubens Barrichello’s 2009 track record lap of 1’19.954 looks in jeopardy.