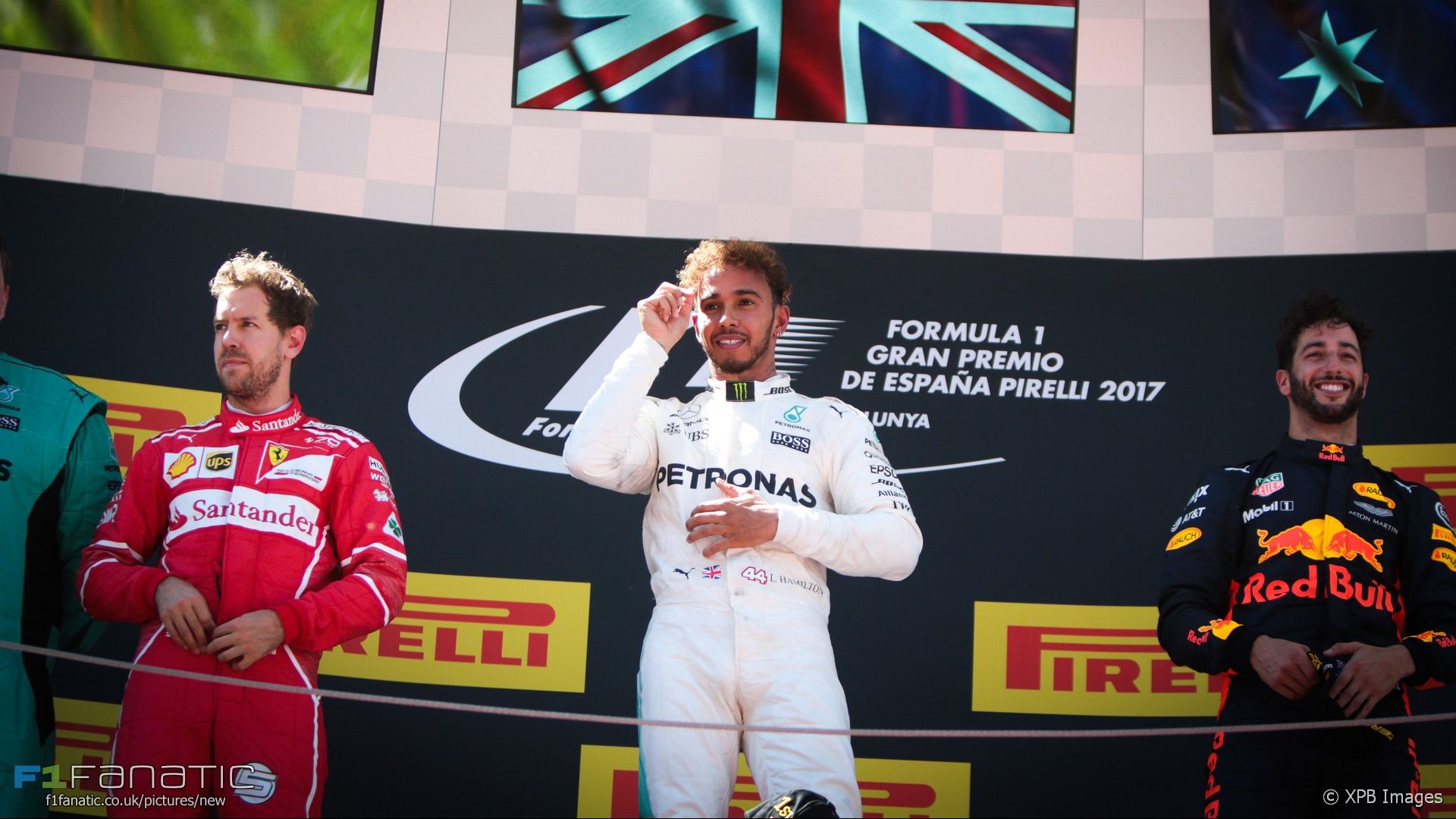 First the first time in almost a decade only three cars finished on the lead lap of a dry grand prix.

The widening gap between the top teams and their rivals was illustrated in Spain by the fact only the podium finishers completed all 66 laps. And the third of those, Daniel Ricciardo, was just a few seconds away from being lapped too.

The last time this happened in any race was the rain-affected 2008 British Grand Prix. Hamilton won that race as well, with Nick Heidfeld’s BMW 68 seconds behind, Rubens Barrichello’s Honda another 13 seconds back and the rest a lap down.

To find the last occasion this happened in a dry race, giving a fairer reflection of the overall competitiveness of the field, you have to go back to the 2007 Monaco Grand Prix. Hamilton finished second in that one behind Fernando Alonso, with Felipe Massa’s Ferrari 69 seconds behind.

After qualifying this weekend it seemed Red Bull’s upgrade had moved them closer to the top two teams. Having averaged 1.4% off the pace over the opening four rounds they qualified just 0.7% down on their rivals in Spain. But Ricciardo finished 75 seconds in arrears, a pace deficit of 1.3% over the race distance.

Two significant running streaks came to an end in Spain. Lewis Hamilton ended the run of different winners over the past ten races, having also won in 2014. And for the first time since 2012 the front row was not a Mercedes lock-out, as Sebastian Vettel’s Ferrari pushed Valtteri Bottas down to second place.

Hamilton’s 64th pole position leaves him one away from equalling Ayrton Senna in second place on the all-time list. Victory and fastest lap gave him the 12th hat-trick of his career, one more than Jim Clark. Only Michael Schumacher has more, though Hamilton needs another ten to match him.

Vettel claimed second for Ferrari, meaning he and Hamilton have shared to top two places on the podium in four races so far this year. No team has scored a one-two in the first five races which hasn’t been the case since 2012, when we made it to round 16 before anyone took a one-two.

Hamilton and Vettel also finished in the points for the tenth consecutive race but Sergio Perez has them both beaten: this was his 15th points finish in a row. Force India also sustained their run of finishing in the points with both cars in every race this year – something no other team has managed.

75 comments on “The gap widens: Just three cars finished on the lead lap”