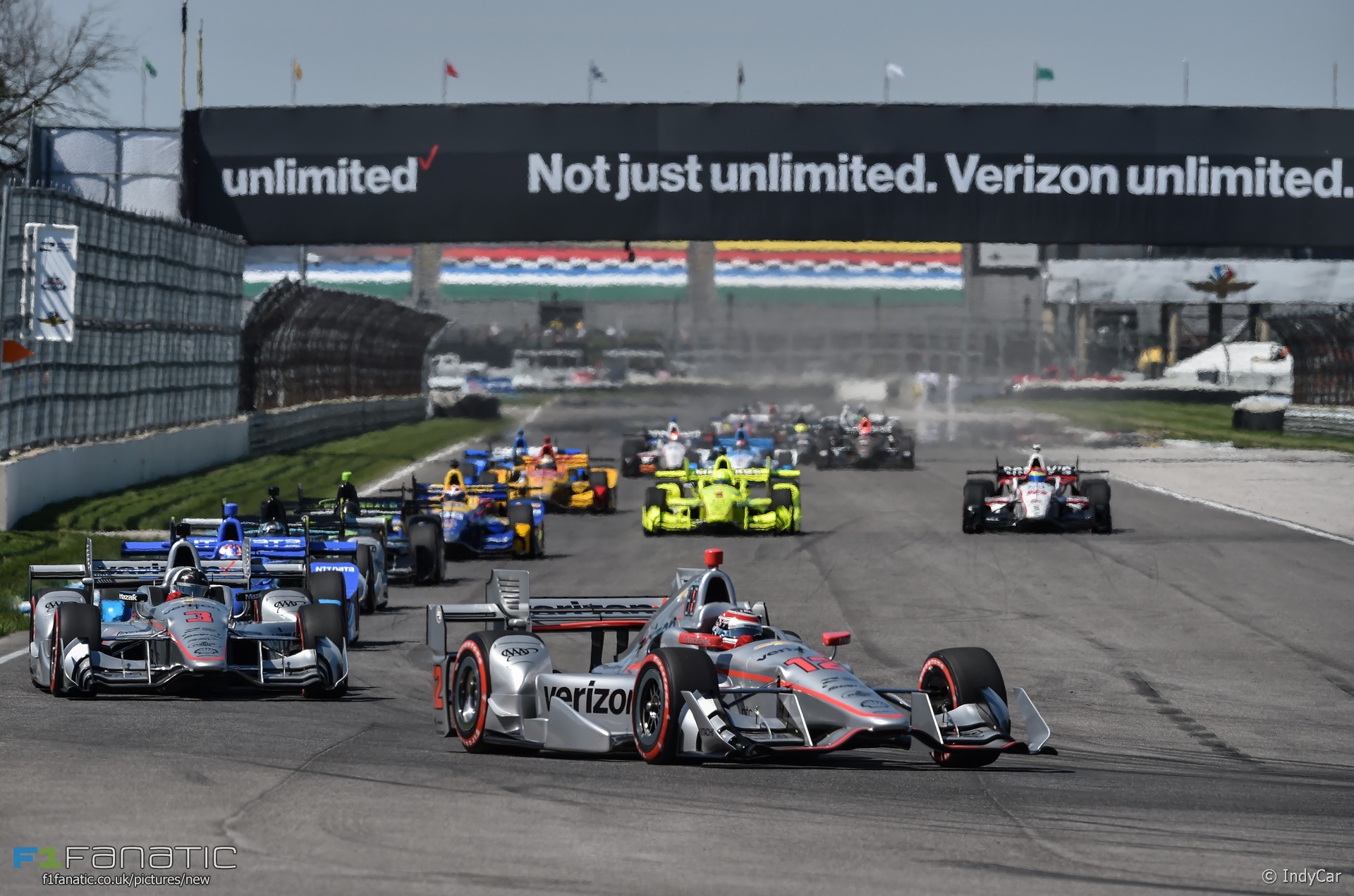 IndyCar saw its fifth different winner in five races in the final event before the Indianapolis 500.

Will Power’s luck finally turned around in the fifth race of 2017. He won in commanding fashion from pole position on the Indianapolis Grand Prix circuit in the curtain-raising event for the Indy 500.

A clean start saw the entire field make it past turn one for the first time since the series started racing on the road course in 2014, but the first lap wasn’t without incident as Mario Andretti collided with Tony Kannan. Former points leader Sebastien Bourdais suffered another frustrating race as he was sidelined on lap four with engine troubles.

Helio Castroneves jumped team mate Power for the lead in the first round of pit stops, but in the second round Power jumped him back and drove to an uncontested victory. Castroneves faded however, and succumbed to Scott Dixon, Ryan Hunter-Reay and Simon Pagenaud, while the fourth Penske of Josef Newgarden endured a difficult day finishing eleventh after three pit lane speeding penalties.

Sebastien Buemi made it four wins from five races as Formula E returned to Monaco for the first time since its inaugural season.

Starting from pole position – remarkably his first of the season – Buemi withstood a late charge from rival Lucas di Grassi to extend his championship advantage. The pair finished first and second for the third time this year.

Buemi flew from the start with di Grassi following, while behind Nelson Piquet Jnr came under pressure from Jean-Eric Vergne. The Techeetah driver made several attempts to pass before finally trying to go around the outside of the turn three hairpin, but contact was made leaving Vergne in the wall, which brought out the Safety Car.

The whole field therefore made their mandatory car swaps early. Di Grassi kept Buemi honest, chasing him to the final corner, and Nick Heidfeld joined them on the podium after a low-key race.

R-ace GP continue to dominate proceedings in the Formula Renault Eurocup. Will Palmer and Robert Schwartzman shared the victories again at Silverstone, but their team mate Max Defourny was frustrated in race one when his clutch failed after pulling away from pole position. Jarno Opmeer also got away slowly and was hit by Red Bull junior Neil Verhagen, prompting a lengthy Safety Car interruption.

After the Safety Car pulled in there were few changes of position. Palmer pulled away to win while Henrique Chaves held up a queue including Schwartzman, Max Fewtrell (who took rookie honours), Sacha Fenestraz and Alex Peroni.

Race two was a more lively affair. Schwartzman lost his pole position advantage to Dan Ticktum at the start, prompting a frantic exchange between the leaders over the opening laps. This was curtailed when the Safety Car reappeared due to Chaves pulling off. Following the lengthy delay Schwartzman led Palmer home while Ticktum robustly defended his podium place from Fewtrell, taking his and Arden’s first Eurocup podium.

Martin Truex Jnr won at Kansas for the first time following a spate of late caution periods. A record-equalling interruptions at this track made for a disrupted race.

A serious accident on lap 199 left Aric Almirola with a fractured vertebra. He made hard contact with Joey Logano, who had tangled with Danica Patrick and spun into the wall. The safety team removed the roof from Almirola’s car to extricate him and he was airlifted to the Kansas University medical center for observation before being released.

Johan Kristoffersson became the first man other than reigning champion Mattias Ekstrom to win a World Rallycross even this season after taking victory in Belgium.

A clean start saw Petter Solberg lead Timmy Hansen, with Kristoffersson taking his joker from third at the end of lap two, a wise decision given what followed. Solberg and Hansen collided down the straight and into turn one with Solberg flying wide, but his recovery caught new third-placed driver Andreas Bakkerud out and pitched him into the tyres.

Hansen looked comfortable up front heading onto the final lap – despite not having jokered – as Ekstrom, who also was yet to joker, held up Kristoffersson, but suddenly a tyre off the rim for Hansen cast the win in doubt. He exited the joker far behind Kristoffersson who took the win, and just held off Solberg for second by 0.011s. It was a bad weekend for the Hansen family as Tommy’s brother Kevin rolled in Q3 after a crash, but thankfully he emerged unharmed.

Pietro Fittipaldi started both races from pole position but failed to win either of them following poor starts. Roy Nissany was first across the line in race one but a five-second time penalty for cutting the chicane handed a breakthrough victory to Rene Binder.

He immediately followed his first victory up with a second in fortunate circumstances in race one. Binder headed for the pits for his mandatory stop at the first opportunity due to damaged tyres, but by sheer luck the Safety Car was deployed meaning he took his stop for free. The flying Nissany took 18 seconds out of Binder’s lead, but they finished in the same order as in race one.

Tiago Monteiro won the first race by a clear margin over Tom Chilton, after the Portuguese driver took the lead when pole sitter John Filippi stalled on the line, not even moving from his grid spot. Monteiro’s Honda team-mate, Norbert Michelisz had a horrible home race, suffering a puncture when he made contact with Thed Bjork, also breaking the Swede’s steering arm. Rob Huff finished in third ahead of the Volvos of Nestor Girolami and Nicky Catsburg.

In race two, Mehdi Bennani won for the first time in 2017 after beating Rob Huff off the line. Huff, Girolami and Catsburg came together into turn two, eliminating Girolami, while Huff got a penalty for the incident. Catsburg emerged in second, but Bennani held him off to win the race by seven tenths of a second. Chilton was third, ahead of the two Hondas of Michelisz and Monteiro.

Lewis Hamilton won the Spanish Grand Prix after a great battle with Sebastian Vettel, who followed him home in second. Daniel Ricciardo completed the podium after a collision between Valtteri Bottas, Kimi Raikkonen and last years winner Max Verstappen at turn one on the opening lap eliminated the latter two, while the race winner last time out suffered an engine failure while running third.

The following series are in action next weekend, while the IndyCar drivers will be qualifying for the Indianapolis 500 on Saturday and Sunday: