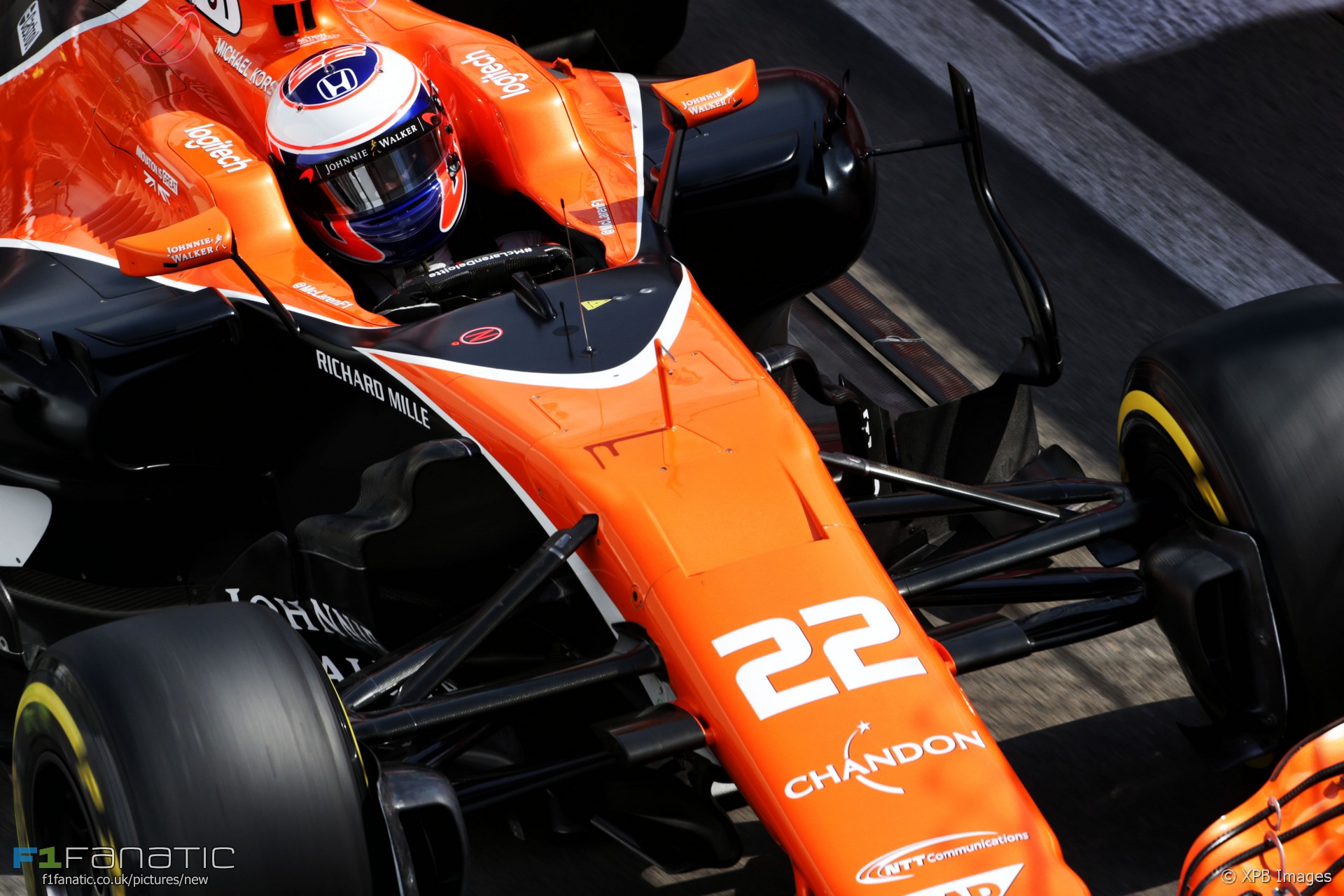 Jenson Button re-adjusted to life at the wheel of a Formula One car during Thursday practice but wasn’t entirely happy with his rivals’ driving. Here are the team radio highlights from practice.

Mercedes quickly chased times with long runs on the ultra-soft tyres at the start of practice.

To Verstappen: “Potential right-rear puncture, mate. Look out for Danny.”

Drivers were quick to explore how much closer the barriers felt in their wider cars.

Button: “I touched the barrier in the second part of the Swimming Pool but it felt pretty gentle.”

Ricciardo: “Felt like we had a loss of power. Let me know if it’s all OK. Just before turn ten. Sounded different in the last sector.”

Grosjean: “Mate I’m losing it every time at turn one. I don’t know what to do.”

Button: “We need to look at the HANS when we come in because it’s getting a little bit stuck.”

Kvyat: “Charge on again this lap.”
“A lot of traffic in front of Carlos, Danny. Next car behind is Perez, turn five.”
Kvyat: “Come on Carlosd. [Censored by FOM] hell.”
“Sorry for Carlos.”
Kvyat: “Ah, Perez, he let me by.”
“OK now behind us is Vandoorne.”

To Stroll: “Cool the brakes on the way in. The gap to Vandoorne is eight. OK Lance we’re going to drive one slow lap on a final push.”

Button continued to acclimatise to the MCL32 in the second session.

Button: “It’s just getting used to the car because it feels very different.”

To Vettel: “Very good lap with this compound.”

Kvyat: “I had a big rear lock at turn five.”

Max Verstappen was plagued by a problem in the braking zones.

Verstappen: “I’m getting like massive push from the downshift. Makes me lock-up.”

Massa: “I cannot find and use the grip of the tyres.”

Qualifying runs have been a problem for Lance Stroll and this time he crashed while exploring the limits of his Williams.

To Hulkenberg: “The circuit is likely to go green very shortly.”

Verstappen: “This is unbelievable. I’m downshifting and there’s massive push.”

Button: “What do you use to turn off the DRS beeps?”

Verstappen: “I’ve got a Ferrari blocking me.”

After his first day back in the car, Button had remembered what he hadn’t missed.

Button: “People are still driving like [censored by FOM], then. That hasn’t changed.”