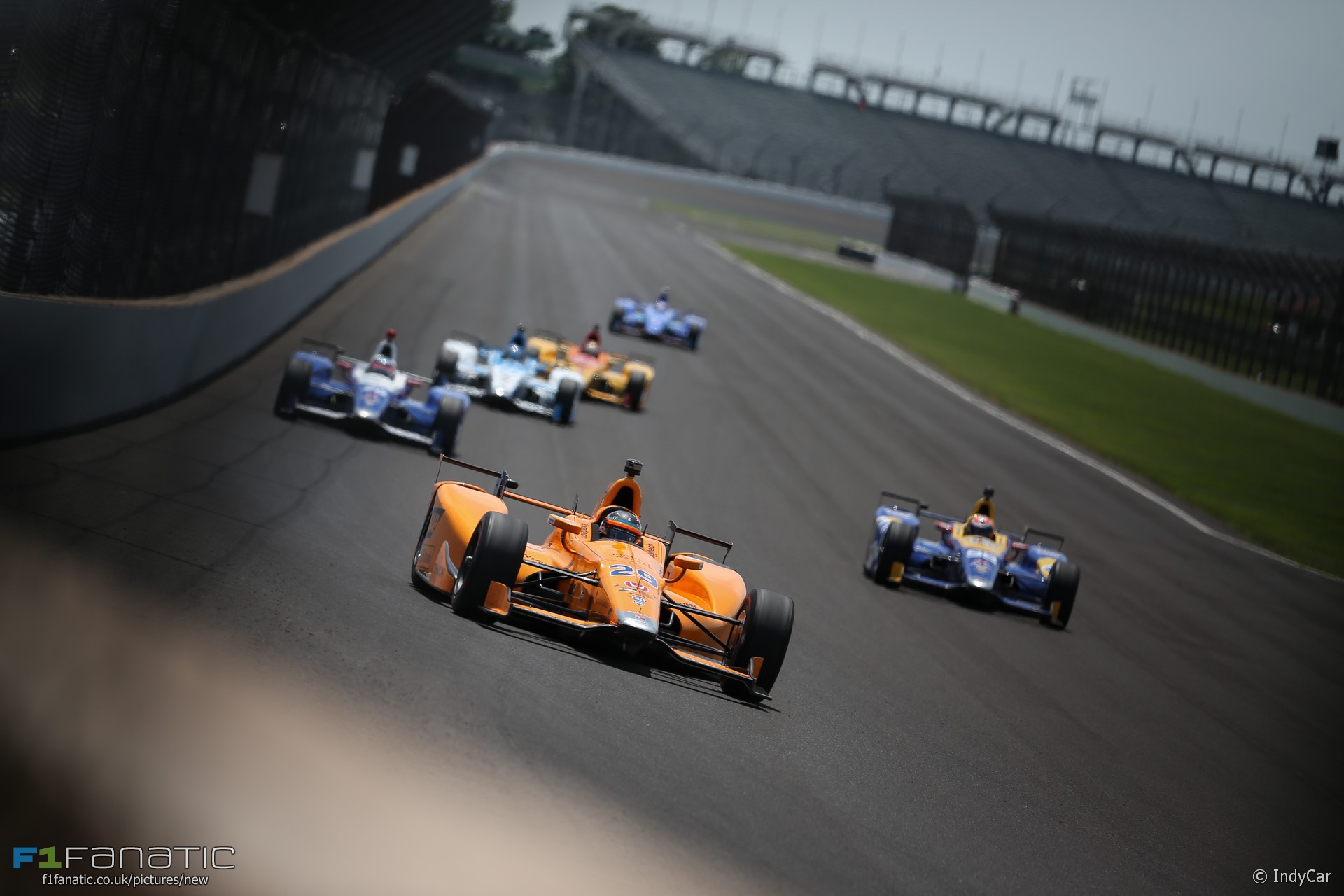 Can Fernando Alonso win the Indianapolis 500 on Sunday? Of course he can. But so can at least a dozen other drivers.

Alexander Rossi, who won the race as a rookie last year, is the best example of how Alonso has a chance to win. Rossi’s victory last year wasn’t just his first Indy 500, it was his first race on a superspeedway. Alonso is in the same position, yet none would argue he isn’t a more accomplished driver.

Pole sitter Scott Dixon has won this race before and is a renowned master of balancing speed and fuel economy. That is often the key to Indy 500 victory: Rossi’s win was an example of this in extremis.

Between Dixon and Rossi on the three-car front row is Ed Carpenter. The local driver only participates in IndyCar’s oval races, which account for six of this year’s seventeen rounds, but is a specialist at this kind of racing.

Alonso took little time to get comfortable with the dizzying speeds of Indianapolis and has parked his car on the second row of the grid alongside fellow Andretti driver Takuma Sato (fourth) and Carpenter’s team mate JR Hildebrand (sixth). Alonso might have started even higher had he not experienced a slight overboost problem during his four-lap run.

Of course in a race that lasts 500 miles it matters little to start with only four cars ahead of you and the other 28 behind. But it should increase Alonso’s chance of avoiding a first-lap crash. IndyCar’s only other oval race so far this year – on the much slower Phoenix course – saw five drivers wiped out at the first turn. And there are 50% more cars on the grid for Sunday’s race.

Sato and Hildebrand can tell Alonso plenty about how high the stakes are at Indianapolis. Hildebrand was on course to score a shock win in 2011 as a rookie when he hit the barrier at the last corner. A year later Sato dived down the inside of race leader Dario Franchitti at the beginning of the final lap, but crashed out:

Tony Kanaan, another of field’s six former Indianapolis 500 winners, starts seventh. He’s joined by Marco Andretti, another of Alonso’s team mates, who came within a few hundredths of a second of winning the race on his debut as a teenager in 2006. Will Power, an IndyCar champion who won the curtain-raising race on the Indianapolis Grand Prix track two weeks ago, completes row three.

Alonso’s motivation to shun Monaco for Indianapolis this year is rooted in the continuing problems McLaren have had with their Honda power unit. But the Japanese engines ran well at Indianapolis in qualifying and have taken all bar three of the places on the front half of the grid.

But Alonso’s victory chances will rest on whether the Honda is as good in race trim as the Chevrolet. Last year Chevrolet-powered cars won every IndyCar race except Indianapolis and Texas Motor Speedway – another high-speed track.

Other Honda-powered victory candidates include former winner Ryan Hunter-Reay – another of Alonso’s five team mates – and last year’s pole sitter James Hinchcliffe. He starts in front of two of Chevrolet’s strongest drivers in this race. Helio Castroneves and Juan Pablo Montoya have five Indianapolis 500 victories between them and the might of Penske behind them.

Their team mates Josef Newgarden and Simon Pagenaud lead them in the championship at present, but expect these two drivers to come to the fore on Sunday as well. Keep an eye out also for Carlos Munoz who has proved utterly fearless at Indianapolis in the past. His two second places in this race were by far his best showings in this championship, discounting his somewhat fortunate win at Detroit two years ago.

One victory contender who won’t be on the grid is Sebastien Bourdais. The ex-F1 driver crashed heavily in qualifying on Saturday, suffering rib and pelvis injuries which are likely to keep him out of action for several months. Occasional IndyCar starter James Davidson will take his place.

Bourdais’ accident is a stark reminder of the risk Alonso is running by taking on this event. It’s one several of his Formula One rivals have said they don’t intend to take. But for Alonso, with further F1 victories unlikely at the moment, pursuing the Triple Crown of Monaco Grand Prix, Le Mans 24 Hours and Indianapolis 500 wins has spurred him on.

He hasn’t made a single wrong step since he first slid into the cockpit of his Dallara DW12. But the serious challenge is yet to come: Mastering millimetre-perfect race craft at speeds of up to 385kph (240mph) against drivers some of which have been doing this for decades.

As the huge numbers of curious F1 fans who are expected to watch the race for the first time on Sunday are about to discover, the opening phases of the Indianapolis 500 can be a cagey affair as drivers take advantage of the periodic pit stops to fine-tune the car’s handling to the conditions of the day. While F1 races tend to be decided in the first few hundred metres, this race often comes down to the final lap.

But that slow-burning start can produce the most explosive outcomes. Last year while Rossi fuel-sipped his way to the chequered flag Munoz and a host of others had fuelled up and were setting a scorching pace as they tried to catch him. The two years before that were tooth-and-nail fights: Montoya vs Power and Hunter-Reay vs Castroneves.

No other race has consistently produced the kind of drama the Indianapolis 500 has in recent years. If Alonso gets in the mix for victory this weekend it will reach a whole new level.

Can he do the incredible and win? We’ll find out when the green flag falls at 5:12pm UK time.

Find out more about the drivers on the entry list for the 101st running of the Indianapolis 500:

24 comments on “Yes Alonso can win: But so could a dozen other drivers”