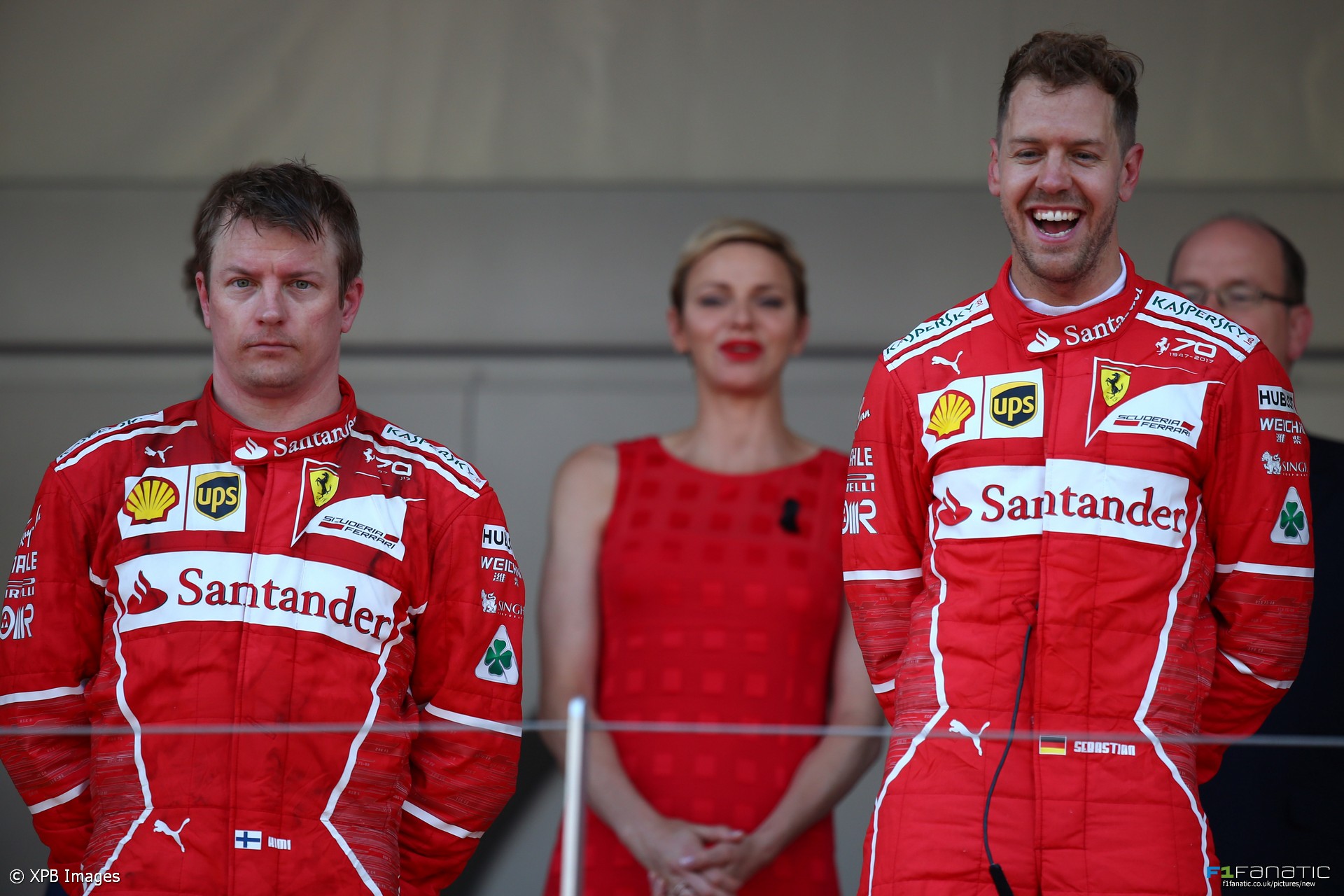 Sebastian Vettel has hailed a ‘fantastic weekend’ for Ferrari, while Kimi Raikkonen ‘wishes he got more’ after the Monaco Grand Prix.

Raikkonen led from pole position at the start of the race, but lost the lead and the race to his team mate after Vettel stayed out longer than him, taking advantage of clear air to stay ahead after his pit stop.

Despite Ferrari securing a one-two victory to take the lead in the constructor’s championship, Raikkonen says the result ‘doesn’t feel good’.

“But this is how it goes sometimes. We go for the next race and try to do better. But it’s one of those days where you wish you get a little bit more.”

Vettel, on the other hand, hailed the performance of Ferrari over the Monaco Grand Prix weekend as ‘fantastic’ as he extended his championship lead over Lewis Hamilton to 25 points.

“I think it was a very intense race,” says Vettel. “I don’t think we could’ve planned much.

“The plan was to try and pull away, which we did. Then Valtteri (Bottas) had really good pace. I think we were struggling both a little bit with our rears. At that point, the window opened. So as soon as Valtteri pitted, I think Kimi responded. For me, I think I still had a bit of a gap and had nothing to lose in P2, so pushed as hard as I could and within two laps I was surprised myself to pull a gap to come out in front.

Vettel admits he had hoped to have passed his team mate at the start and was forced to stay patient and wait for an opportunity to present itself during the pit stops.

“there was a phase in the first stint that was really tricky, the tyres started to slide. It was quite uncomfortable,” explains Vettel.

“I think Valtteri and the pack were catching up a bit, we were facing some traffic. But then I had like, I don’t know, a second attempt – a second set of tyres. I had a couple of laps where the car was really, really good. I pushed everything I had, because I knew that there is a chance and then that’s it. So I was able to use that window and come out ahead.”

Once ahead, Vettel quickly opened up a gap of over 12 seconds to Raikkonen behind, which was negated following the late Safety Car intervention.

“After the restart, it was really tricky with the cold tyres,” says Vettel. “I think every one of us was struggling – Daniel (Ricciardo) said he hit the wall at turn one on the first lap.

“So it was really difficult but after a couple of laps I was able again to control the gap to behind. So fantastic job. The team has done really well. Great thanks to them and a fantastic weekend for Ferrari.”