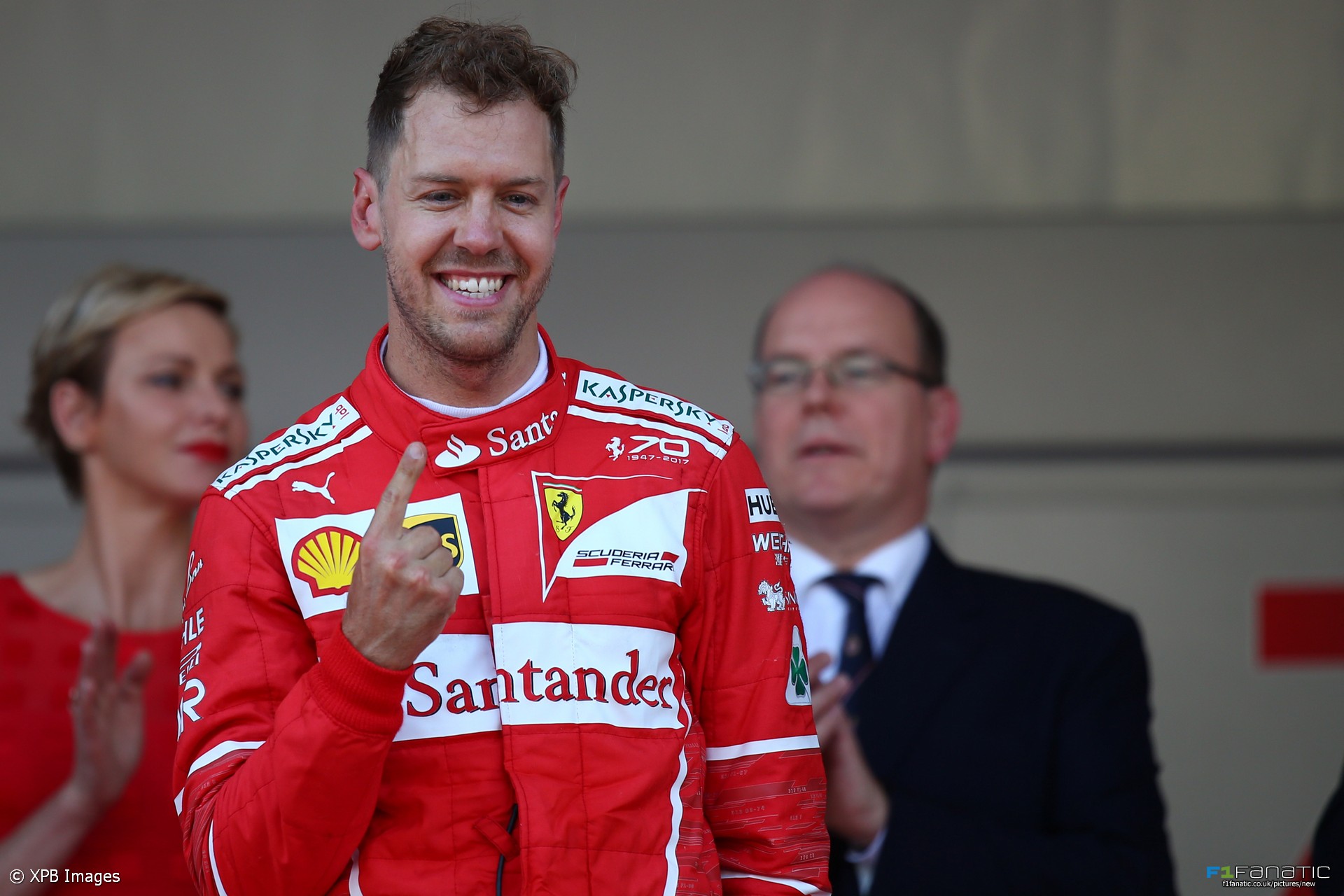 Fittingly, 20 years ago it was Schumacher who ended a 16-year win-less streak for Ferrari in the Principality. His 1997 win was their first since Gilles Villeneuve did the honours in 1981.

It was a weekend for streaks coming to a close. Kimi Raikkonen took his 16th career pole position having waited almost nine years since his last one in the 2008 French Grand Prix.

He’d gone 3,262 days without starting from the front. On that day he also lost the win to his team mate who started alongside him on the front row – on that occasion it was due to an exhaust problem on his car.

For the first time in 21 races there was no Mercedes driver on the podium. There last run of podium finishes began in Monaco last year, one race after Lewis Hamilton and Nico Rosberg took each other out on the first lap of the Spanish Grand Prix.

Another streak which ended was Sergio Perez’s 15 consecutive points finishes – his personal best. Team mate Esteban Ocon also failed to score for the first time this year. It was Force India’s first no-score since last year’s Austrian Grand Prix, when both cars retired.

A consolation for Perez was that he set a new fastest race lap for this configuration of the Monaco layout. But his 1’14.820 was a few tenths of Schumacher’s 1’14.439, set during the 2004 race. Raikkonen’s pole position time was a new outright course record.

It was Ferrari’s first pole position in Monaco since Felipe Massa’s in 2008. But Vettel’s victory means the last three Monaco Grands Prix have all been won by someone other than the pole sitter.

Vettel has now finished all of the first six races inside the top two places. The last driver to do this was Nico Rosberg in 2014 – in fact he made it to eight races, but wasn’t able to win the title that year.

Fernando Alonso’s absence opened the door for Jenson Button to return and start his 306th grand prix. He has now started as many races as Schumacher and only Rubens Barrichello, on 322, has amassed more starts.

During his sojourn to the States Alonso led a race for the first time since the 2014 Hungarian Grand Prix. He spent 27 laps in the lead, the third-highest of any driver in the race. Max Chilton led 50 (one-quarter of the race distance) and finished fourth while Alonso’s team mate Ryan Hunter-Reay led 28 before also retiring with a Honda engine failure. Race winner Takuma Sato led 17 laps and set the fastest lap, averaging 364.018kph (226.190mph).

Alonso’s absence also means Nico Hulkenberg and Felipe Massa are now the only drivers to have out-qualified their team mate at every round. Stoffel Vandoorne, Jolyon Palmer and Lance Stroll have failed to out-qualify their team mates at all of this year’s races.

Finally, while Mercedes failed to make it to the podium their places were taken by the other two ‘big three’ teams. Such is their collective domination of F1 that not only have none of the other teams taken a podium finish yet, none of them have completed a lap with one of their cars inside the top three.