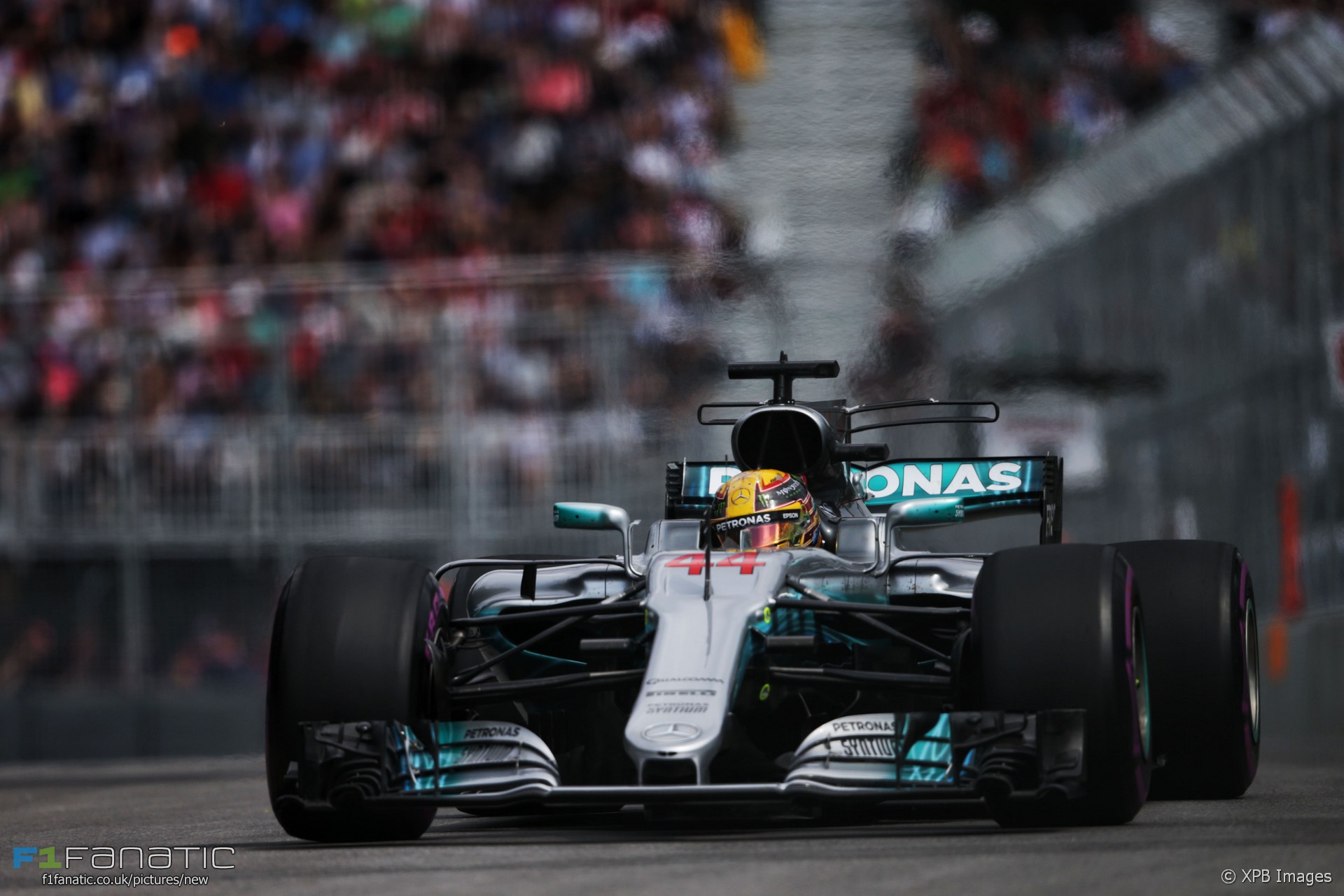 Lewis Hamilton equalled his hero Ayrton Senna’s tally of 65 pole positions after a stunning performance in qualifying at Montreal.

Hamilton took his sixth pole position at the Circuit Gilles Villeneuve after producing an explosively quick turn of pace in the top ten shoot-out. Sebastian Vettel matched Hamilton first run but a scruffy final lap meant he had to settle for second place alongside his championship rival again.

After the session ended Hamilton was presented with an original helmet worn by Senna from his family in acknowledgement of his achievement.

Only the Ferrari drivers felt confident enough in their pace on the super-soft tyres to use them in the first part of qualifying. They duly grabbed their places in Q2, though Raikkonen slipped down the order after clouting the barrier at turn nine. The Mercedes pair headed the times having used the ultra-soft tyres.

For the first time in 2017 Pascal Wehrlein failed to out-qualify his team mate. The Sauber driver made a strange mistake approaching turn one on his final flying lap, putting two wheels on the grass and spinning into the barrier. He and Marucs Ericsson qualified on the back row.

This was bad news for Kevin Magnussen who had abandoned an earlier run due to traffic and now found himself unable to improve. Lance Stroll and Stoffel Vandoorne, the latter also having had a brush with the barrier, also failed to proceed further.

The Toro Rossos both made it through though not without some rancour. Carlos Sainz Jnr complained he was unwilling to help his team mate by offering him a slipstream, contrary to his team’s wishes.

Sainz’s troubles continued in Q2 when he spun early on at turn one. He complained his car was a “nightmare” to drive. He was even less happy when a problem for his team mate brought out the yellow flags at the end of the session.

Daniil Kvyat smacked the barrier at the exit of turn nine and punctured a tyre. He limped back to the pits, meaning other drivers had to back out of their final efforts.

They were joined by Jolyon Palmer who came off badly when both Renaults set their final times together and his team mate went almost nine tenths of a second quicker.

Fernando Alonso went no further as well, complaining that his Honda appeared to have less power than in Q1. He failed to improve his lap time from the first session, which suggested he had a point.

The shoot-out for pole position was electrifying. Hamilton’s first lap was a staggering effort, lowering the benchmark time to 1’11.791, well inside anything seen so far during the weekend and comfortably a new track record. It looked unapproachable.

But Vettel had the pace to match it. A tiny slip-up at turn seven was potentially all that kept him from doing it: He crossed the line just four thousandths of a second slower than the Mercedes.

By the time Vettel returned to the pits Hamilton was heading back out again in his Mercedes. With his final run he took another three tenths of a second off his previous best, leaving Vettel with it all to do on his final run.

It proved too much for the Ferrari driver. Vettel’s last run was a scruffy effort, and even before he reached the hairpin at the far end of the track it was clear pole position wasn’t going to be his.

Bottas and Raikkonen had already taken up the places behind their team mates on the second row. Behind them Max Verstappen led the two Red Bull drivers, and Felipe Massa out-qualified the Force Indias.

151 comments on “Hamilton equals Senna with stunning performance in qualifying”