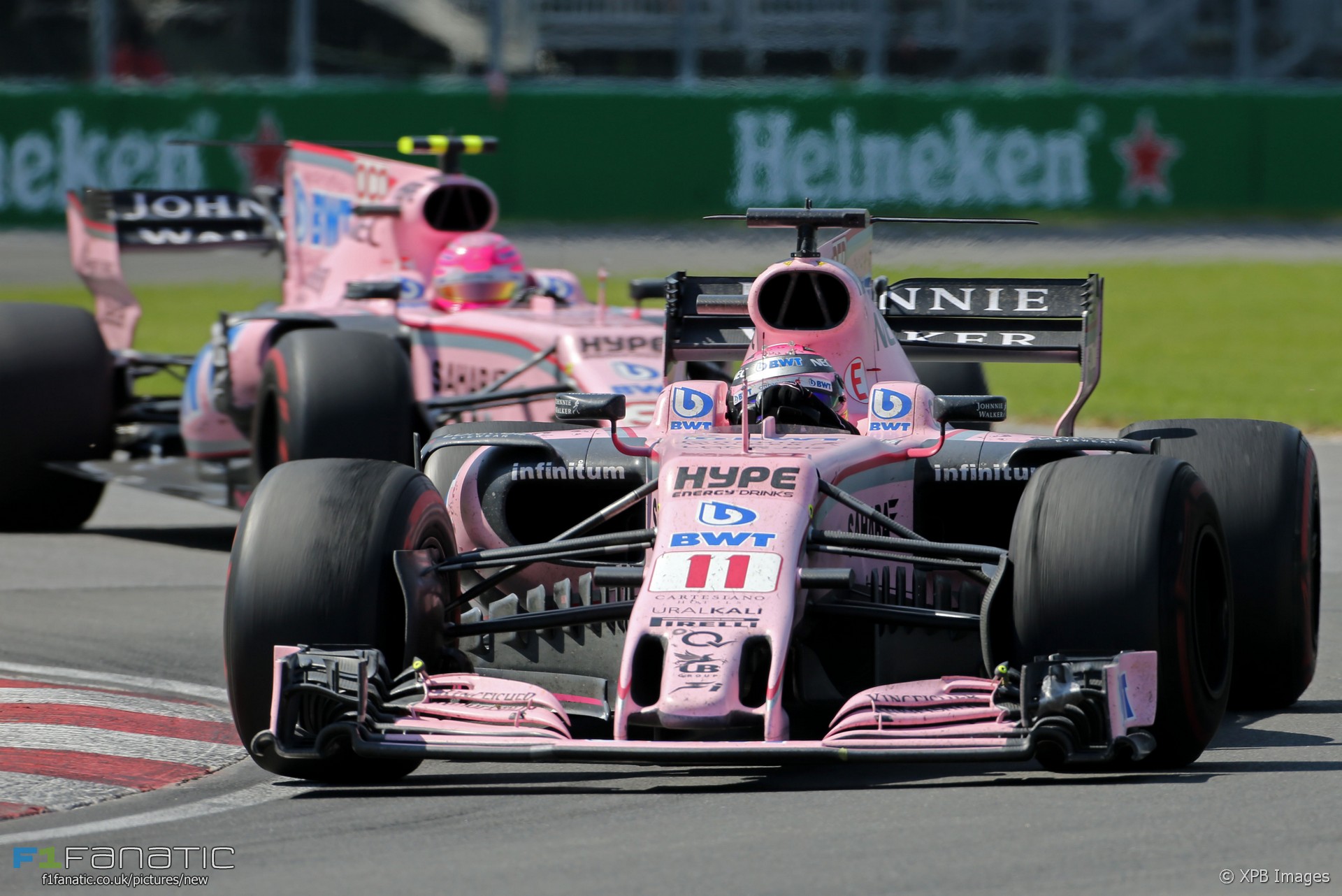 Sergio Perez defended his refusal to obey an instruction to let his team mate past during the Canadian Grand Prix.

The Force Indias were chasing Daniel Ricciardo for the final podium position in the second half of the race but were being caught by Ferrari. At one point Perez was told to yield to his team mate Esteban Ocon, who had fresher tyres.

To Perez: “Checo at the end of this lap we would like to give you three laps to attack Ricciardo. Otherwise we will have to switch. Ferraris are closing.”
Perez: “It’s a waste of time, man. Ricciardo is degging off. I want the chance to overtake him. I mean, let us race, man. Please.”
To Perez: “Checo the plan is we want to attack before the Ferraris arrive behind us so we are on that plan. If we switch and Ocon couldn’t get past we would switch back.”
Perez: “Ricciardo, I want the chance to go into the lapped cars. Just leave me along now. Give me a chance. We will pick up some traffic. There will be an opportunity.”

Perez said he believed he could get past Ricciardo if the Red Bull driver made a mistake.

“When the team asked me to let him by we were going to lap some cars so I asked to give me a chance because we probably get some traffic and it’s all that I needed, I was always on his DRS zone. At no point I was more than a second and a half, two seconds behind him. The only point I was behind him was when I was saving brakes.”

Perez was sceptical Ocon could’ve passed Ricciardo if he’d had the chance.

“In the end I had 40 or so laps to put the manoeuvre on Ricciardo and he didn’t do a single mistake. Esteban had 40 or 50 laps behind me on a much fresher tyre and he was never close to me to make a move. So I mean I think in the end we all finished where we deserved to finish.”

The two Force Indias finished fifth and sixth. Perez indicated he was unhappy with his race strategy which left him on much older tyres than his team mate at the end.

“I knew that the Ferraris were coming behind quite quick and I was struggling for tyre grip but I was thinking the podium could be mine,” he said. “The strategy for me wasn’t ideal today but I tried my best.”

“I was losing a lot of rubber so I could have been quite vulnerable after that, not only in that respect but to finish the race with so little rubber. It’s also, the main point for us is that in my career it’s the first time I’ve found myself in this situation. The team as well, we never found ourselves in this situation.”

Ocon believes his team mate’s refusal to let him through cost him a potential podium finish.

“It was a great race, just a shame I couldn’t have the chance to go and pass Ricciardo,” he said. “I think I had the pace by far to do it. A podium was possible today. We have to discuss what happened in the briefing room.”