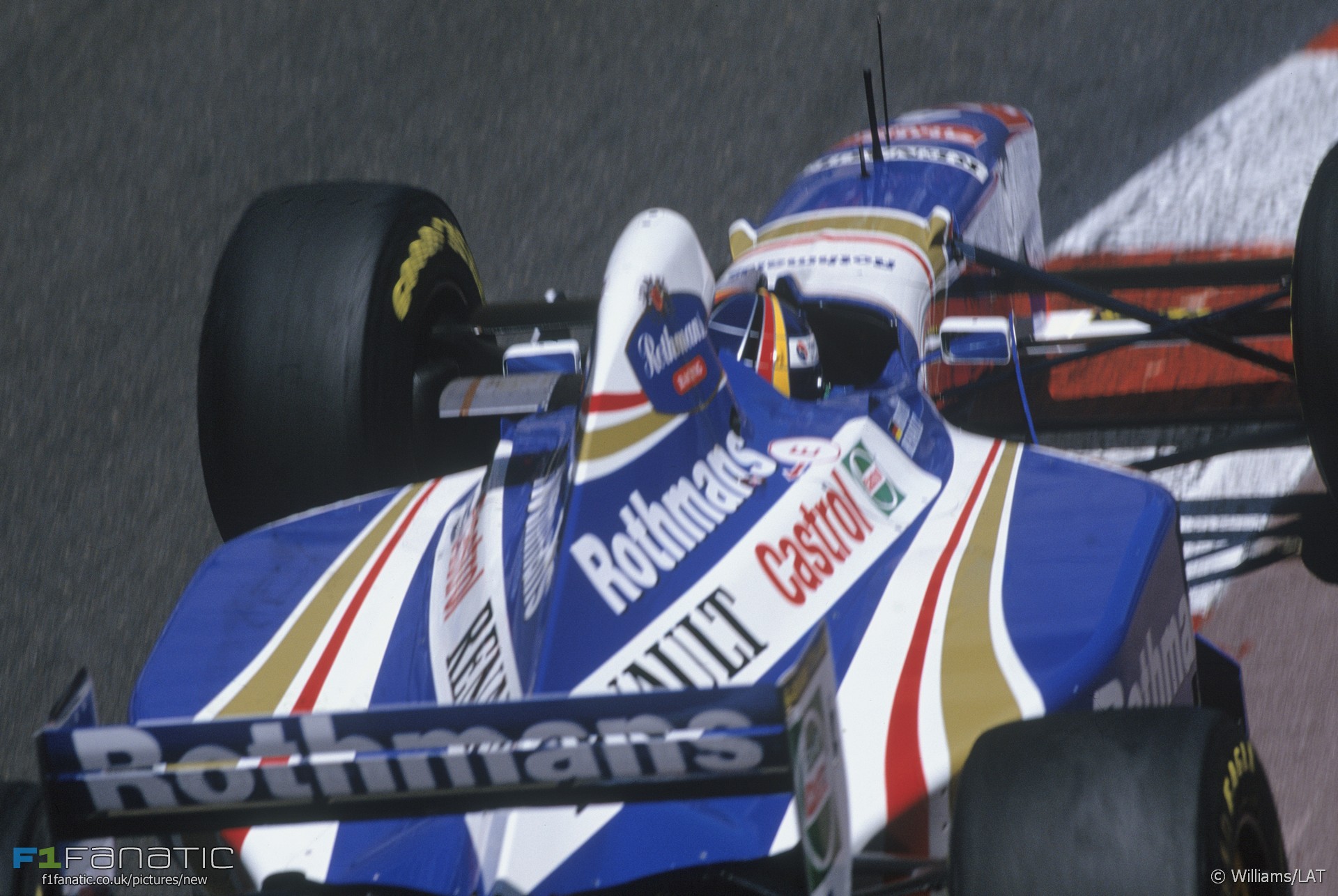 Championship favourite Jacques Villeneuve was feeling the pressure ahead of his home race.

He’d wrested the points lead back from Michael Schumacher by winning in Spain. But his forthright words to the media had earned the wrath of the sport’s governing body.

On the Wednesday before the Canadian Grand Prix, Villeneuve was summoned to Paris where he was given a formal reprimand. Villeneuve had described FIA present Max Mosley’s plan to introduce narrower cars and grooved tyres as “shit” in an interview with German publication Der Spiegel.

The following day he arrived at the track named after his late father. But his hopes of emulating Gilles Villeneuve’s 1978 Canadian Grand Prix win were to be dashed.

Villeneuve’s sanction paled in comparison to the other off-track political intrigues. The same month truck racing promoter Wolfgang Eisele took the FIA to court over its Formula One broadcasting contracts, setting in motion a series of events which would lead to an investigation of the sport by the European Union and major structural changes to its administration.

The vexed question of who was entitled to F1’s royalties was also in the news. Bernie Ecclestone’s efforts to float the sport on the stock market were compromised as three teams – Williams, McLaren and Tyrrell – held out for better terms on the sport’s all-encompassing Concorde Agreement. A crunch meeting of the Formula One Constructors’ Association on June 6th ended after five minutes, Ecclestone departing in a rage.

Meanwhile despite the championship being three months old the calendar remained in a state of flux. Ahead of the Canadian race the sport’s governing body announced Jerez would host the season finale in place of Estoril, but rumours persisted the Portuguese race might be retained somehow (it wasn’t).

When the real action began there was no mistaking the result the locals had come to see. A great cheer went up as the thrillingly close qualifying sessions neared its climax and Villeneuve planted his car on pole position by just five hundredths of a second.

But on a track where overall downforce mattered little and engine power counted most, Michael Schumacher’s revised Ferrari was a genuine threat. Villeneuve had one final chance to secure the top spot but he blew it from the beginning. Having run wide coming on to start/finish straight he locked a wheel at turn one. Struggling to adjust his brake bias, Villeneuve said he “braked too early for the next few corners”.

Schumacher, running next on the road, pinched pole by 13 thousandths of a second. For the first time in 1997 Williams would not start the race from pole position.

The next car behind them was a surprise. Rubens Barrichello, running a daringly thin rear wing on his Stewart, planted his Cosworth-powered, Bridgestone-shod car in third place. The Japanese rubber which had helped Olivier Panis to second in Spain promised to be his strong suit for the race.

Heinz-Harald Frentzen joined him on the second row ahead of David Coulthard, despite the McLaren driver suffering a Mercedes engine failure late in the session.

The Jordans were next, revelling in the potency of their Peugeots. Jean Alesi was the first of the Benettons in eighth, and for this weekend he had a new team mate.

Having been suffering for weeks, Gerhard Berger finally underwent an operation to cure a sinus infection. Test driver Alexander Wurz was therefore pressed into action, despite the difficulties of fitting his lanky frame into the B197’s cockpit. Wurz was quickly up to speed, but contact with the wall opposite the pits ended his qualifying session.

Eddie Irvine once again started well behind his team mate in 12th. Jos Verstappen dragged his underpowered Tyrrell to 14th, one place ahead of Damon Hill.

The reigning world champion had endured a disrupted build-up to the race. First his new D-spec Yamaha engine expired during Friday’s running. He resorted to the old engine for qualifying but spun on his first run, delaying Villeneuve. Nonetheless he narrowly beat his team mate, who used the new engine.

“My fault completely,” said Hill of his spin. “Thankfully I got a time in because that was the only time I got the rest of the session. The spare car had a brake problem and we had to come in and change that. The rest of the time we just got traffic.”

At the rear of the field Jarno Trulli managed to put a car between him and team mate Ukyo Katayama. It was the Stewart of Jan Magnussen, who in a stark contrast to his high-flying team mate lined up on the back row.

Schumacher kept his lead at the start while a wheelspinning Villeneuve was fortunate to hold on to second. Barrichello was swamped and the fastest-starting Giancarlo Fisichella and Jean Alesi took up the chase of the championship leader.

They didn’t have to wait long to pounce. At the end of lap two Villeneuve lost the rear of his car and nosed into the barrier at the beginning of the pit straight. His win-or-lose season had registered another ‘zero’.

“I made a big mistake,” he confessed afterwards. Two years later a spate of crashes at the same corner led to it being dubbed the ‘Wall of Champions’. For now Schumacher was leading, and seemingly on course to retake the championship lead.

Around the same time Katayama stuffed his Minardi into the barrier after turn nine. The Safety Car was needed to recover his wrecked M197, but as the race was just five laps old no one was tempted to take advantage of the opportunity to pit.

However Williams, showing they still hadn’t mastered refuelling strategy four years after it had been reintroduced, chose to pit Frentzen shortly after the race went green again. That left their sole remaining car well out of contention.

The Safety Car was good news for Panis, who had been forced to pit at the end of the first lap after running into Mika Hakkinen. The first-lap tangle also eliminated Irvine and Magnussen.

The disruption to the early part of the race was a problem for Schumacher. Running a two-stop strategy meant he needed more time to build a gap, and when he eventually pitted on lap 28 he hadn’t had enough time to build the margin he needed.

Fisichella and Alesi had already stopped by this point, the pair switching places, so it was Coulthard who assumed the lead of the race. As his Goodyears were last well McLaren were only planning to pit him once and a repeat of his Australia win was in the offing.

Panis made his third visit to the pits on the race’s 43rd lap. That cemented his hold on seventh place with the promise of more to come thanks to his durable Bridgestones.

Once again the Goodyear drivers were suffering. Panis unlapped himself from Schumacher, whose Ferrari was suffering from tyre graining. Schumacher headed for the pits, sacrificing his lead, but Coulthard was unable to capitalise as he too was forced to pit for fresh tyres. Making matters worse, Coulthard stalled the car, and Schumacher had his lead back.

But just as the race seemed to be turning in favour of Panis, it all went wrong. Rounding turn five for the 52nd his rear suspension gave way, possibly due to early contact, and he made head-on contact with a tyre barrier. The front of the Prost was badly damaged, and the Safety Car was immediately pressed into action while the Medical Car was sent to the scene of the crash.

As medical delegate Sid Watkins recalled in his memoirs, this came as something of a shock to the inexperienced Medical Car driver. “Let’s go,” said Watkins. “In the middle of the race?” his man protested. “But we don’t know where the accident is.”

“If we drive around the circuit we’re sure to find it,” responded an unimpressed Watkins. Moments later he was tending to Panis, whose injuries fortunately involved no more than broken legs. But the crash shook a sport still traumatised by the events of three years earlier, and the race was not restarted after it was stopped.

Schumacher was therefore decalred the winner in sombre circumstances. Alesi and Fisichella completed the podium, the latter making a first visit to the rostrum. Frentzen and Herbert were next while Shinji Nakano brought modest consolation for Prost with a point for sixth. But now the French team had to make a quick decision on how to replace their star driver.

Coulthard was classified an unlucky seventh – had the race been red-flagged when Panis had crashed he’d have won. Both Arrows completed the curtailed race, the delayed Hill behind his team mate, and Gianni Morbidelli was the only other driver running at the finish.

A visibly concerned Schumacher took the winner’s trophy and the championship lead along with it. But Villeneuve was unmoved by the crash and later criticised his rivals for, in his view, seemingly unduly concerned about the seriousness of Panis’s injuries.

His views proved controversial, but he was not the only person who held them. When Schumacher voiced his concern that an accident of that magnitude had been sufficient to break Panis’s legs, Watkins thought that reaction was “a bit off”. The row over Villeneuve’s words continued into the next race weekend, but his costly slip-up at the wheel was a greater concern for his championship chances.