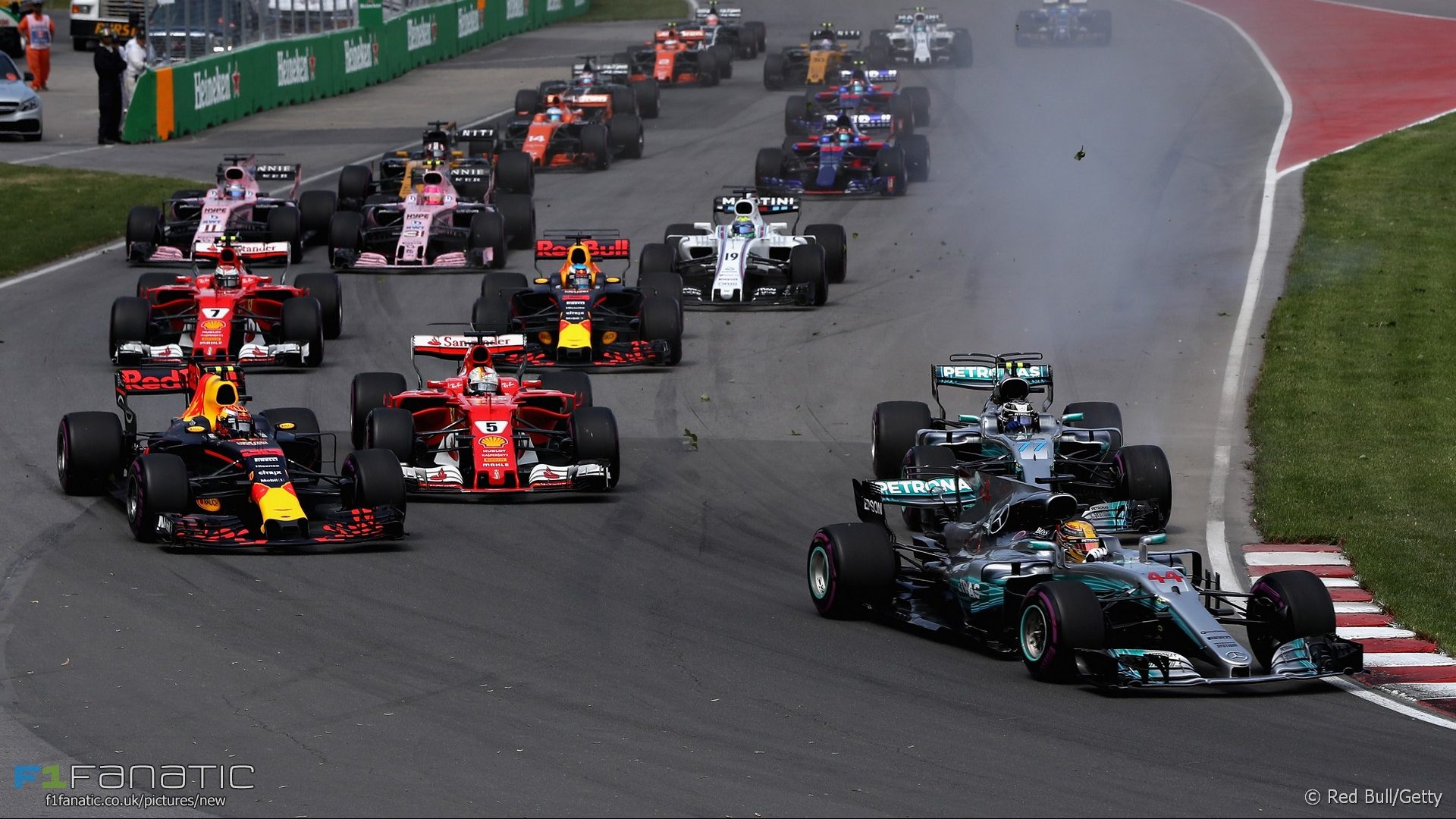 The fight for victory ended quickly in Canada, but behind the two Mercedes there was an exciting battle for the final podium position.

Did that make for an entertaining race? Most F1 Fanatics seemed to think so, and rated this race 7.5 out of ten. Here’s what you had to say about the race.

Hamilton had an easy day, but rest of the field kept it exciting!
@Mtlracer

Loved the race for an unpredictable start and all that happened especially the last couple of laps when the raging Vettel cut through the field.
JohnBt

I seemed to watch different race to most other voters. The race was pretty much done and dusted after the a few laps with Mercedes romping away at the lead and the rest driving in a nice queue.

I did enjoy the midfield battles, but they weren’t particularly exciting: I’m sounding like a broker record, but once again it felt like the DRS was either overpowered and the overtake would’ve happened anyway, or then the “DRS train” happened like with the Force Indias behind Ricciardo.
@Kaiie

Lewis Hamilton and Sebastian Vettel shared the front row but the prospects of them fighting for the victory were dashed when Vettel and Max Verstappen touched at turn one.

Vettel later absolved Verstappen of blame and the driver he complained about on the radio was not Verstappen, but Valtteri Bottas. Nonetheless there were many complains about Verstappen’s driving and the effect it had on the race:

One of these days the stewards are going to have to stop giving Verstappen such leeway. He’s involved in incidents every race weekend.
Fireblade

I felt it was a racing incident as Verstappen was almost a full car ahead and he took the racing line very close to the track limit. What was he supposed to do, get on the grass? I get it that people want Vettel versus Hamilton fights, and this ruined it for us, but Vettel can only blame his bad start for this.
@GechiChan

This wasn’t the only piece of driving some people wanted to see the stewards take a strong line on. Others appreciated the ‘hands off’ approach to penalties we have seen so far in 2017:

The stewards were awful in my view. I’m not commenting on the Vettel incident, I’m talking about Magnussen weaving all over the place, Grosjean being Grosjean doing his second major mistake this season, Vandoorne also weaving dangerously and Kvyat getting a double penalty (it was the stewards mistake to issue the wrong penalty).
Pennyroyal tea (@Peartree)

Magnussen didn’t get penalised for weaving as the rules states it is OK to change direction once, and back to original racing line again. Which was what Magnussen did.

And furthermore I think the new owners supports more racing, like wheel to wheel racing. Fights for positions, close combats, etc., rather than one-and-a-half hours of cars circulating in a long procession.

Even though it is annoying if your hero were behind Magnussen, he complied with the rules. The cars sufficiently faster than Magnussen easily went by, whereas the midfield teams did not have the power surplus.

Do you really want a fight where the front runner just pulls over at let the other ones by?
@Jens

Finally, the marshals received some well-earned praise for keeping the disruptions to a minimum:

Great start and good battle for third to seventh but sadly Raikkonen got a brake-by-wire problem. Good recovery drive from Vettel, but considering this is one of the track that easy to pass if you have power advantage, it’s expected for a Ferrari to breeze half of the field anyway. Still, a good overtake moves on the Force Indias.

However, I think this is the first time I really disappointed with Perez because not only he most likely denied Force India greater point finish, he already followed Ricciardo for effectively the entire race without even getting close to his gearbox or even attempting to make a move. Yet, he still denying Ocon while they still have time before they need to defend against the Ferraris.

Shout out to the track marshals who clear the track fast enough. I was pretty surprised to see the Safety Car called in so quickly considering there were two cars to clear and they needed to push Verstappen’s car back into the turn one escape road.
@Sonicslv

The race had a broadly positive reception on Twitter:

That Canadian GP was the most exciting #F1 race in the hybrid era for me, personally, in my opinion

DRS proving very effective on the back straight before the chicane. #F1

What have the marshals at the #F1 #CanadianGP been drinking? 🤔 looks like it's hammered time…

This is one of the best races of the year! Thrilling so far! #F1 #CanadianGP

Amazing racing action for all the positions except first. Great to see Force India battling up too. #F1 #CanadianGP

Mercedes are literally the most boring thing about this race #F1

Ocon's moaning on the radio is exactly what is wrong with modern F1. Drivers need to learn that they must overtake to gain a position #bbcf1

That was an awesome race #F1 #CanadianGP 🇨🇦

Now that was a proper F1 race

I have to say that was a pretty good race this evening! #CanadaGP #F1

Love for F1 is back again this season. Fast cars and some amazing racing. Epic title duel between HAM and VET. That's all you can ask for ☺

Oh no Vettel has been over taking people but the sheer boredom of #F1 means I missed it….

Haven't watched F1 in years but really enjoyed that race. Then to top it off Prof X arrives and does a shoot the boot out of Danny's shoe!

#f1 at last an actual race breaks out during the 70 parade laps… makes a nice change.. will be back to watching paint dry next time ?

The idea of an F1 car doing 52 laps on a set of super sorts is ridiculous. @Pirelli have dropped the ball. #C4F1

And that's why I always enjoy the race in Montreal! #CanadianGP #C4F1

Great racing in @IndyCar An action packed #CanadianGP, and solid racing with an awesome winner in the #Pocono400

Great race! Gutted that the McLaren engine went again.. love the Mercedes one two! Great fight between the Force India's to #CanadianGP

The #CanadianGP was amazing! 10/10 would recommend

No other way to put it – the beginning of the Canadian GP was bonkers. Massa totally blindsided. #CanadianGP #C4F1

Enjoyable #CanadianGP; Hamilton dominant, Bottas and Ricciardo both solid, too. Vettel did well to bounce back for 4th. #F1

Dunno about you, but that's easily one of the best V6-era races. If only it sounded better… #CanadianGP

But there were complaints about some of the broadcasts:

Stop bleeping out the drivers communications. I want to hear the mood of the driver #badlanguage #f1 #teamradio

Someone remind @MBrundleF1 that the grid walk on #SkyF1 should be about @F1 close-up & not chasing celebrities! @SkySportsF1 #cringeworthy

Once again @NBC is RUINING F1. U-MAS has no ads, clearer audio and far less annoying graphics. Shame that @f1 tolerates this from @nbcsports

Every shot from the paddock is completely pointless #CanadianGP #F1

#skyf1 is bordering on the truly dreadful. They can't admit this was a very easy win for their boy today 🙄#CanadaF1 #CanadianGP #f1

“[Räikkönen] had that problem with his brakes, but it was quite convenient he did…!” More embarrassing conspiracism from Damon Hill. #F1