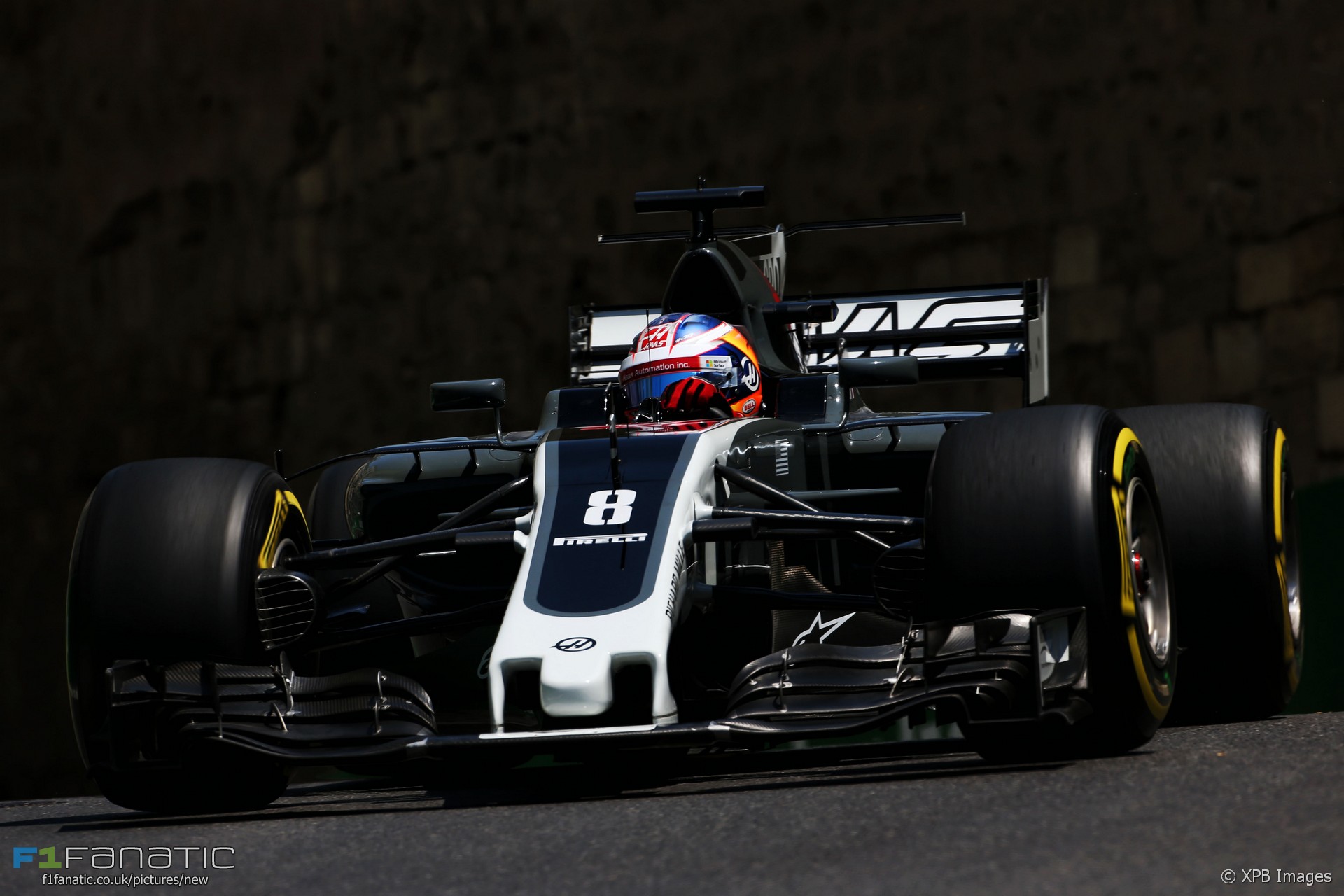 It was another unhappy Friday practice for Romain Grosjean, who ended the day slowest at the Baku City Circuit.

Here are the team radio highlights from him and the other drivers on the first day of practice for the Azerbaijan Grand Prix.

To Palmer: “It will be aero P3 after turn two.”

To Vandoorne: “And remember to stay off the kerbs.”

To Stroll: “OK Lance we’re happy with the brakes.”

Verstappen: “The battery’s completely empty. I should charge it.”

However the long straight also made it difficult to keep the tyre temperatures consistent front-to-rear.

To Massa: “OK Felipe try to keep temperature in the front tyres, cool the rears a bit.”

Hamilton: “Overtake not working.”
“OK, we’ll look into it.”

To Kvyat: “Keep in mind to stay off-line at the exit of turn 17 when you do the constant speed.”

To Vandoorne: “Priority is to cool rear tyres, keep temperature in the fronts.”

To Stroll: “Carried a little bit more speed into five and lost a bit more in six. Otherwise a good lap.”

Ericsson: “Very low power out of the corner.”

Vettel: “Went straight into turn three. I ran a bit into traffic.”

To Perez: “More front temperature. Cars behind are slow. You have space ahead. 20 seconds.”

To Ricciardo: “Perez is in the barrier. There’s a lot of debris. I’d suggest… you’re going to have to have a look mate.”

“Grosjean: “The brakes are not braking. I have got no grip.”
“OK understood.”

The second session began the way the first one had ended for Grosjean.

Grosjean: “Issues on the brakes.”
“OK we’ll check the brakes for you.”

Daniil Kvyat got stuck up the escape road at turn 15 but managed to get going again after restarting his engine using the MGU-K.

Kvyat: “Yeah I’m in the escape road. A lot of front locking.”
“OK Danny can you go back on the track?”
Kvyat: “Yeah I’m trying to put reverse. It won’t go into reverse.”
“Try now Danny, try again. You are in first. Neutral.”

Grosjean: “I’m sorry but I cannot drive that. I cannot.”

To Palmer: “Recharge off and press the overtake button half a second later than the previous lap.”

Kimi Raikkonen was unhappy with one of his rivals’ driving.

Raikkonen: “OK what’s the rule on people weaving on an out-lap? Because if I try to pass him he’s going to hit me in the side.”
“He shouldn’t be erratic and dangerous. That’s the rule.”
Raikkonen: “That’s what he’s doing.”

“Hamilton: “Is DRS not working?”
“No there was a yellow at turn three.”

Raikkonen: “I would like to try one more lap, get a good warm-up lap.”

Grosjean: “Mate I don’t know what’s going on. Another massive front lock. I can’t go rearwards on brake balance any more. They are hot.”

To Ricciardo: “OK make your own space, make a decent space. It’ll be mode nine after turn 20.”

Another McLaren stoppage occured in second practice. However though Fernando Alonso suspected the engine was to blame, McLaren later claimed the gearbox was responsible.