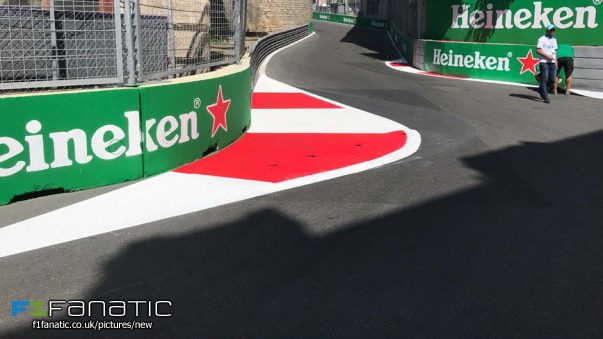 The kerb at turn eight on the Baku City Circuit has been eased following the crashes in yesterday’s F1 practice sessions.

Sergio Perez and Jolyon Palmer crashed at the corner after touching the kerb on the inside of the narrow bend.

Ahead of Saturday’s running the FIA announced “the kerb on the apex of turn eight has been shortened and the track edge re-aligned”.

The barriers on the outside of the corner, which had already been moved back ahead of this weekends event, have been adjusted again. “One additional row of TecPro barriers have been inserted on the first part or the barrier on the exit of turn eight (not the last part),” according to the FIA.

However turn eight remained a trouble spot in the supporting Formula Two race ahead of today’s final practice session. Sean Gelael crashed after hitting the altered kerb, blocking the track and bringing the race to an early end.