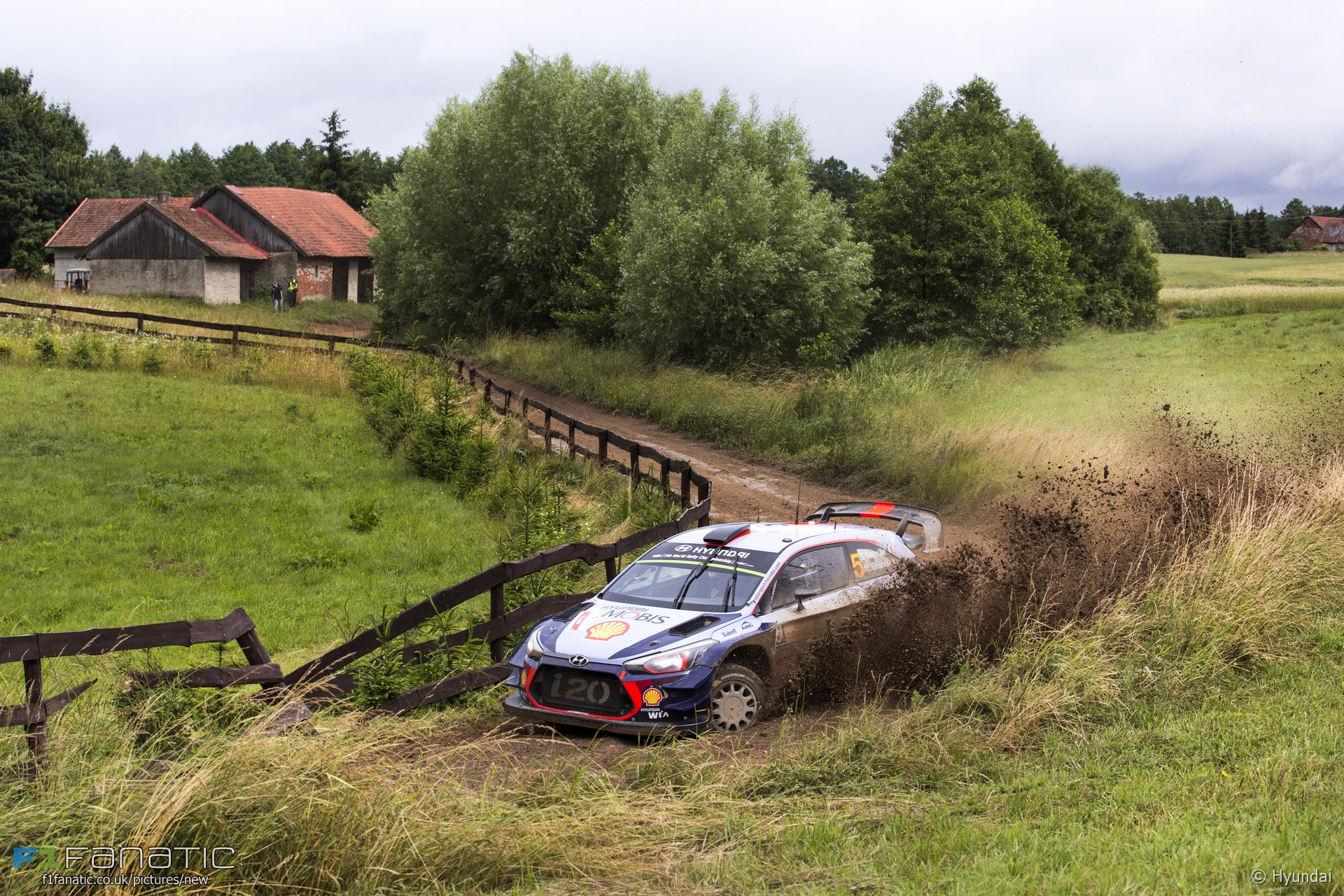 An incredible back-and-forth battle in a very wet Polish round of the World Rally Championship was decided when one of the contenders crashed out with two stages to go.

Also last weekend two DTM drivers were taken to hospital following a heavy crash at the Norising. And a Formula Three driver was fortunate to escape injury at the Hungaroring when his car was almost flipped over as its was towed away by marshals.

It was Jari-Matti Latvala who led early on in appallingly wet conditions on Friday in what soon transpired as a four-way fight between himself, Neuville, Ogier and the newest rally winner Ott Tanak. By the time Friday ended however Ogier had fallen back and Neuville had taken the lead, but Latvala in third was only 6.6 seconds back.

Ogier fell further behind on Saturday morning with a rare error, while his team mate Tanak took the lead in a top three that was split by less than ten seconds. In the afternoon, stage sixteen saw drama for all contenders as Latvala stopped on stage with a technical problem, Neuville lost fifteen seconds with a puncture, and Tanak’s rear wing detached itself from the car, losing him vital seconds in the day’s remaining stages.

Neuville led by 3.1 seconds heading into the final day but a strong opening stage from Tanak saw it swing back once more, 1.8 in favour of the M-Sport driver. Sadly however, the battle that looked set to go to a nail-biting conclusion on the final stage was ended early when an error from Tanak eliminated him from the running.

A now cautious Neuville claimed a comfortable win ahead of team mate Hayden Paddon – who secured his first podium of the season after a wretched campaign thus far – with Ogier finishing third, while Latvala won the power stage after restarting under Rally-2 rules on Sunday.

Race one was won by Bruno Spengler, marking both his and BMW’s first win of the season. Half an hour before the start, the heavens opened, and one driver hit trouble even before the end of the formation laps – Maro Engel spun and was forced to start from the back. Maxime Martin suffered wheelspin in his start from pole, meaning Spengler inherited the lead – a position he wouldn’t give up until the end. Martin finished in second ahead of Mattias Ekstrom, Marco Wittmann and Timo Glock: four of the top 5 represented the BMW marque.

Martin took victory in race two, but only after an action packed race that was red flagged after a huge crash involving Mike Rockenfeller and Williams tester Gary Paffett. Tom Blomqvist started from pole position, but Robert Wickens took the early lead ahead of Spengler and Lucas Auer. An incident involving Rene Rast and Wickens brought out the safety car, meaning Martin took the lead as the pit stops played out. Paffett and Rockenfeller’s crash occurred on lap 35, with the red flags thrown as both drivers walked away, but with the Audi man limping to the ambulance. Auer pressurised Martin until the end, but the Belgian would keep the lead and win, with Edoardo Mortara, Ekstrom and Wittmann rounding out the top five.

Pedro Cardoso was fortunate to emerge unscathed when the marshals at the Hungaroring almost flipped his car over while towing it away during qualifying for the first race of the weekend.

Runaway championship leader Harrison Scott could only manage 14th on the grid during the rain-hit session. Thiago Vivacqua took his first win from third on the grid but Scott hit back on Sunday to take his sixth win of the year, extending his lead over Nikita Troitskiy to 68 points.

Maximilian Gunther won the opening race after contact between race leaders Jake Hughes and Lando Norris handed him a comfortable advantage. Hughes was eliminated while Norris finished third on the road behind Pedro Piquet, but was later penalised – gifting Guanyu Zhou the final podium spot. Championship leader at the time – Joel Eriksson – struggled in qualifying with seventeenth, but recovered impressively to fourth.

Norris bounced back to win race two after a late overtake on pole sitter Ralf Aron, who was then swamped and could only manage fifth. Hughes and Gunther were the first two through behind Norris and completed the podium while Eriksson couldn’t replicate his heroics of race one and finished tenth.

Jehan Daruvala got a great start from the front row in race three to jump Gunther to turn one, and held off an attack from third-placed Aron to race to a relatively uncontested victory. Gunther held position in second to extend his new championship lead, while Norris performed another late-race overtake on Aron to steal the final podium position.

Will Palmer would have lost his Eurocup championship lead had rival Sacha Fenestraz not collected a jump start penalty in the third race of the weekend at the Hungaroring. Fenestraz took the chequered flag first but a ten-second penalty relegated him to eighth. It also handed Gabriel Aubry his second win in the series, just a few hours after his breakthrough triumph on Sunday morning.

Red Bull junior driver Dan Ticktum became the first rookie to claim a victory in 2017 after taking pole position for race one in a disrupted session. Electrical failure for Palmer in qualifying and race one meant he started the weekend point-less. He ended it with a reduced lead of five points over Robert Shwartzman and 22 over Fenestraz.

Ricky Stenhouse Jnr won NASCAR’s second race of the year at Daytona following the usual string of crashes at the circuit. Brad Keselowski and Matt Kenseth won the two stages but both were included in the nine of the top fourteen drivers in the championship that failed to finish.

Johan Kristoffersson won his home event to extend his lead in the championship, leading the final from start to finish. Andreas Bakkerud followed him home after also taking his joker lap on the final tour, while Sebastien Loeb – who jokered on the opening lap along with team mate Timmy Hansen – took the final podium position.

Ricky and Jordan Taylors domination of the IMSA series was finally broken in the Six Hours of the Glen. But it was another victory for Cadillac, this time courtesy of Filipe Abluquerque, Joao Barbosa and Christian Fittipaldi. The JDC-Miller ORECA of Stephen Simpson, Chris Miller and Mikhail Goikhberg looked like taking an historic win after overtaking Barbosa with only 25 minutes to go, but traffic and an inspired performance from Barbosa meant they had to settle for second place.

Mazda completed the podium with Jonathan Bomarito, Tristan Nunez and Spencer Pigot. The Taylor car that has so far been so dominant recovered to sixth after hitting the wall on the first lap at the start, making up four laps from full course caution wave-bys after the repairs. Alexander Sims and Bill Auberlen gave BMW their first win for the M6 at the 17th time of asking, holding off Ryan Briscoe and Richard Westbrook in their Ford, while GTD saw Acura take the win with Andy Lally and Katherine Legge.

Marc Marquez extended his streak of domination at the Sachsenring to eight years by once again taking pole position and winning the race, though he was run close until the closing laps by home hero Jonas Folger. Folger secured his maiden podium in second with Dani Pedrosa completing the rostrum, while the Yamaha duo of Maverick Vinales and Valentino Rossi recovered from poor qualifying performances to finish fourth and fifth. Former championship leader Andrea Dovizioso struggled on a track that doesn’t suit his Ducati bike, and could only manage eighth.