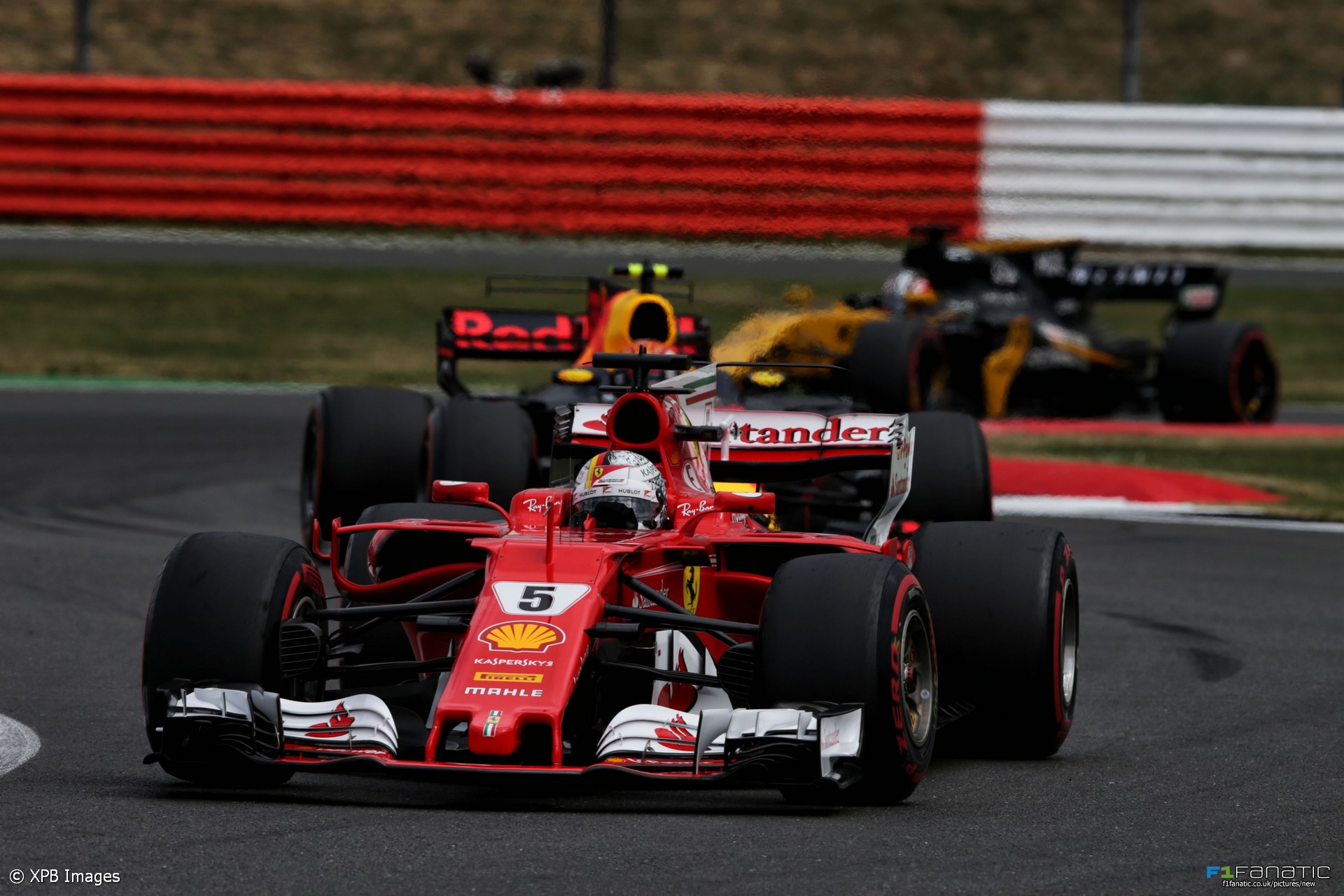 Sebastian Vettel said he had no indication his tyre was close to failing in the closing stages of the British Grand Prix.

Rain was a concern before the race began but none fell before the chequered flag.

To Vandoorne: “There’s nothing on the radar but can’t guarantee it will stay dry. Showers could build up during the race.”

Hamilton: “How’s the weather looking?”
“Still expect it to be dry for quite a while.”

It was a disappointing day for Jolyon Palmer who didn’t even get to start his home race.

The Toro Rosso drivers collided on the first lap. Each blamed the other, though it was Daniil Kvyat who collected a penalty.

Kvyat: “He just turned into me.”

“All OK with the car Carlos?”
Sainz: “Yeah all OK. You can tell Danny he did a very good job there.”
“OK, are you able to continue?”
Sainz: “No, car is broken.”

Grosjean: “Massa pushed me very deep to turn six. I almost had to go on the grass to avoid the contact.”
“OK understood.”

To Raikkonen: “Think about Hamilton and what he does normally with restarts.”

Daniel Ricciardo went off while trying to climb through the field, losing several places.

Grosjean: “Man I got… they pushed me again off-track.”
“OK understood.”

Ericsson: “He pushed me wide two corners in a row, come on. I give the space.”
“OK Marcus, crack on with the race, push.”

Kvyat was furious about his drive-through penalty for rejoining the track in an unsafe fashion.

Verstappen: “He wants to play bumper cars or something.”
To Vettel: “Get him next lap.”

Vettel: “That was another move on the braking.”
“Copy that understood.”

To Bottas: “So this is your chance, Valtteri, just get the hammer down.”

To Hamilton: “OK Lewis it’s going to be very close with Valtteri.”

Raikkonen: “There is something jumping in the cockpit. Something is loose, I don’t know what.”

To Alonso: “OK Fernando box now we need to retire.”

To Vandoorne: “Cars ahead are fighting, there’s going to be opportunities Stoff.”

Valtteri Bottas overtook Sebastian Vettel for a place on the podium

Vettel: “I have no front grip.”

Disaster struck the Ferrari drivers at the end of the race as both suffered punctures.

Raikkonen: “[Censored by FOM] me my left-front tyre is broke.”

Vettel: “Well there was no sign of that happening. Sorry. I had vibrations but I had it for like 20 laps. It didn’t look massively worse. The tyres didn’t look good but they never looks good.”
“From our side it was instantaneous.”

6 comments on ““There was no sign of that happening”: British GP team radio highlights”