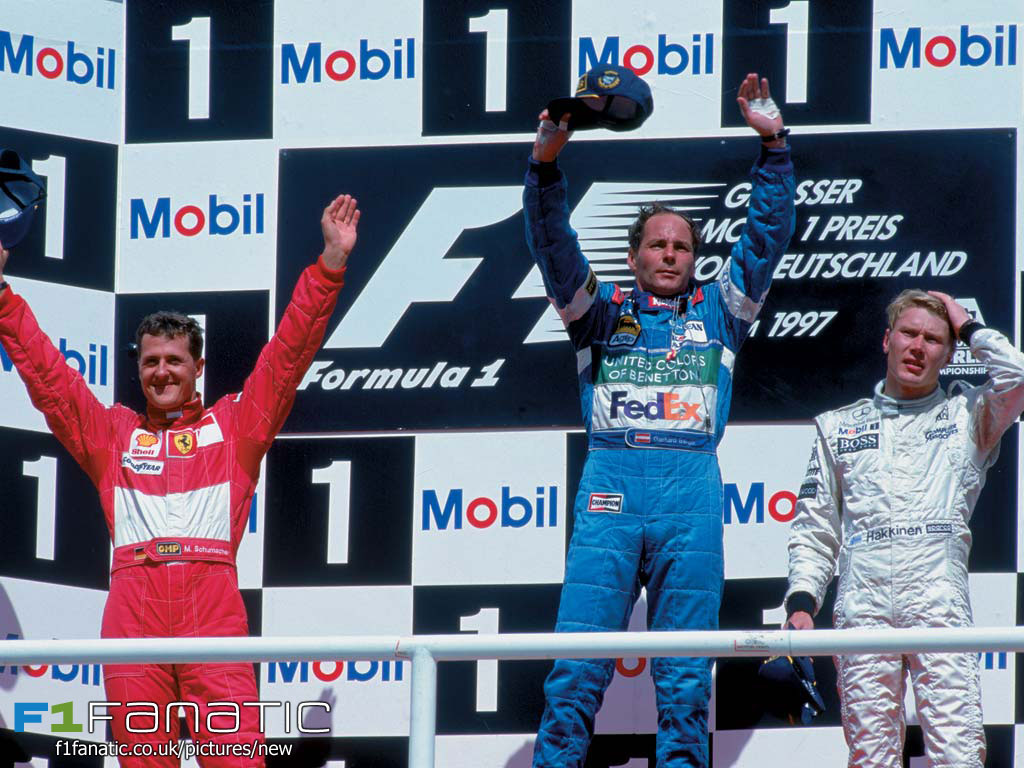 The championship contest took a back seat at the German Grand Prix 20 years ago as one of the sport’s old hands returned to claim a final victory.

Gerhard Berger had sat out three races, during which time he had two operations on a sinus infection and also suffered the untimely loss of his father in a light aircraft accident.

So his sudden return at the peak of his form meant the tenth round of the season had a surprising and popular winner.

Benetton arrived in Germany amid speculation over the future of its drivers. Berger had revealed he wouldn’t be driving for the team in 1998 while Benetton announced Giancarlo Fisichella would be one of its drivers.

“Giancarlo has been on loan to Jordan this season,” explained Benetton team principal Flavio Briatore. “We have been impressed by his performances and had no hesitation in exercising our option so he can drive for us next year.”

But would Fisichella be driving for Briatore in 1998? His future at the team was in doubt. Since winning the constructors’ championship and taking Michael Schumacher to a second title in 1995 Benetton had gone a year and a half without a race victory.

“The season hasn’t finished yet and we don’t want to make any changes in mid-season, especially not in the team’s management,” Briatore told the media. “As far as the future is concerned, I do not know, because we can only make decisions at the end of the season.”

Silverstone had pointed to an upswing in the team’s form as both cars finished on the podium. Berger’s return left his substitute Alexander Wurz without a drive, the latter having turned down an offer from Sauber, who was still fielding junior racer Norberto Fontana on a race-by-race deal in place of the injured Gianni Morbidelli.

To the surprise of many, it was Benetton who set the pace. Berger had an obvious affinity for the Hockenheimring. He’d scored his last victory three years earlier at the track. And he was three laps away from winning the last German Grand Prix when his engine blew.

He took to the track in qualifying with the manner of a man who had every intention of avenging that lost win and proving he was still a force to be reckoned with. His first run dislodged Mika Hakkinen from the top of the times sheets with a lap of 1’42.086. After that he simply sat back as driver after driver failed to beat his time.

Williams were in trouble. The reigning champions had started every race so far from the front row and taken seven pole positions out of nine. But at the Hockenheimring, still in its dauntingly fast pre-2002 configuration, Jacques Villeneuve and Heinz-Harald Frentzen were plagued by understeer and never looked like contenders for the front row.

Even Michael Schumacher, with the weight of the home crowd behind him, could only get within a tenth of a second of the B197.

Berger almost seemed to be toying with his rivals. Out he came again, hanging it out through the Hockenheim chicanes, and lopped another two-tenths off his pole time. On a subsequent run he was two-tenths up again heading into the stadium, only to lock and wheel and lose time, sending him back to the pits.

By now the time was running out. Berger might have improved with one final run but he spun at the Sachskurve. Coincidentally, that served to spoil a late run by Mika Hakkinen which might have put the McLaren-Mercedes ahead. Instead he had to settle for third.

Hakkinen had been robbed of victory in the previous race at Silverstone by a late Mercedes engine failure. The team had prioritised reliability ahead of the annual Hockenheim ‘torture test’. “Since Silverstone, Mario Illien has been working really hard round the clock in fact and on Thursday at Monza we did a race distance without any problems whatsoever,” he said.

The pair were split by Fisichella, who was revelling in the power of his Peugeot. This was despite the engine still being in the same configuration used at Monaco as the French manufacturer pursued reliability gains.

Fisichella achieved his late improvement after removing the team’s distinctive new ‘hammerhead’ aerodynamic appendages from his car. It set up an enticing front row with Benetton’s outgoing driver joined by the rookie who was replacing him.

But Fisichella’s team mate was dismayed to be out-qualified at his home race. “Ralf [Schumacher] was stunned,” remembered Eddie Jordan in his autobiography. “It took the wind from his sails completely.”

The elder Schumacher was bumped down to fourth ahead of Frentzen and Jean Alesi, the second Benetton driver coming to a stop on his final run. Ralf Schumacher shared row four with David Coulthard, who had a spin.

Villeneuve tried the team’s spare car, which had originally been set up for his team mate, on his final run. It was to no avail, and he qualified ninth.

With Benetton, Jordan and McLaren occupying the top three grid spots, the championship protagonists had a fight on their hands to add to their points tallies. And within seconds of the start their team mates were out: Frentzen and Irvine tangled at the exit of turn one.

Irvine made what he reckoned was his best start of the year so far, and swept into turn one expecting Frentzen on his outside to yield the track. He didn’t and contact left the pair with damaged tyres which, following a slow tour of the 6.8-kilometre track, caused terminal damage for both. “I had nowhere to go,” Frentzen complained. “I couldn’t go on the grass at that stage and then he ran over my front-right tyre.”

Berger won the sprint to the first corner while Fisichella held onto his second place. The gap between the pair after one lap was already 1.8 seconds, and Fisichella was keeping an eye on the progress of Schumacher, who had taken third off Hakkinen. McLaren were also down to one car by lap two, as Coulthard came to a stop after going off in the stadium section.

While Berger stretched his lead, Hill moved into the top ten by passing Herbert. Pedro Diniz in the other Arrows made a less successful attempt to get by, taking himself and the Sauber out of the race. Minardi had also lost Tarso Marques to a gearbox failure at the start, so half-a-dozen cars had dropped out by lap nine.

By lap 15 Berger held a 12-second lead over Fisichella, who still had Schumacher close behind him. But with Benetton planning to pit twice compared to their single-stopping rivals, the fight for victory was closer than it appeared. What mattered now was whether Berger could make his first stop and come out in clear air.

He didn’t quite make it. After his first visit to the pits on lap 17 he emerged in the tail of Hakkinen’s McLaren, which was now running in third place. It took him over a lap to find a way by, costing him several seconds to the new race leader.

This was – for the first time in his career – Fisichella’s Jordan. It was the first time the team had led a race for two years, and when he ran two laps longer than Schumacher before making his first pit stop his chances of winning looked promising. It later emerged Ferrari had put too little fuel in Schumacher’s car as well, but by then Fisichella’s fortunes had changed.

Meanwhile Villeneuve was having a louse afternoon. Unable to keep up with Hakkinen and Alesi ahead, he held up Trulli and Ralf Schumacher until his first pit stop. After that he began to close on Hakkinen, but when he came under attack from Trulli at the first chicane he spun into a gravel trap and retired. This was the tenth race of the year and he’d now failed to score in five of them.

Around the same time Berger arrived in the pits for his second stop. He had lost time due to Rubens Barrichello’s Stewart expiring in front of him and to his dismay he rejoined the track behind Fisichella.

“I nearly lost the race because somebody blew up their engine on the straight and it was so foggy I couldn’t see the road anymore,” he said. “I lost about four or five seconds. I said ‘now I think I lost the race’.”

But almost immediately after taking the lead Fisichella lost it again. An error at the Ostkurve chicane allowed Berger by. His blushes were spared by the FOM television director, who was too busy showing replays of Villeneuve and Barrichello retiring to catch the unfolding drama at the front of the field.

Fisichella was seemingly on course for a great second place, but with six laps to go those hopes were shattered when his left-rear tyre deflated as he approached the stadium section. He was fortunate the failure had happened so close to the pits, but as he approached the entrance the Jordan got away from him and he spun. Even then a podium finish might have been possible, but the car came to a stop shortly after he’d rejoined the track on fresh rubber.

This was a relief for Schumacher, who held on to second place after his splash-and-dash visit to the pits. Hakkinen was promoted to the podium for the first time since the season-opening race followed by Trulli and Ralf Schumacher, the latter struggling with a loose fastener on his windscreen. Alesi finished a distant sixth in the second Benetton, underlining just what an extraordinary performance this had been by his team mate.

Berger’s win proved not only to be the last of his career but Benetton’s final victory as well. They had also scored their first ever wins together, 11 years earlier in Mexico.

Even so, he later admitted having misgivings about his return. “I really shouldn’t have done this race,” he said in 2011. “I had just come out of hospital, Flavio didn’t want me in this race and tried everything to stop me.”

While Schumacher had failed to give his fans the home victory they craved, it had been a very positive weekend for him in terms of the championship. As well as extending his lead over Villeneuve by six points, the long-awaited cancellation of the season-ending Portuguese Grand Prix meant there was one fewer race for his rival to catch up.