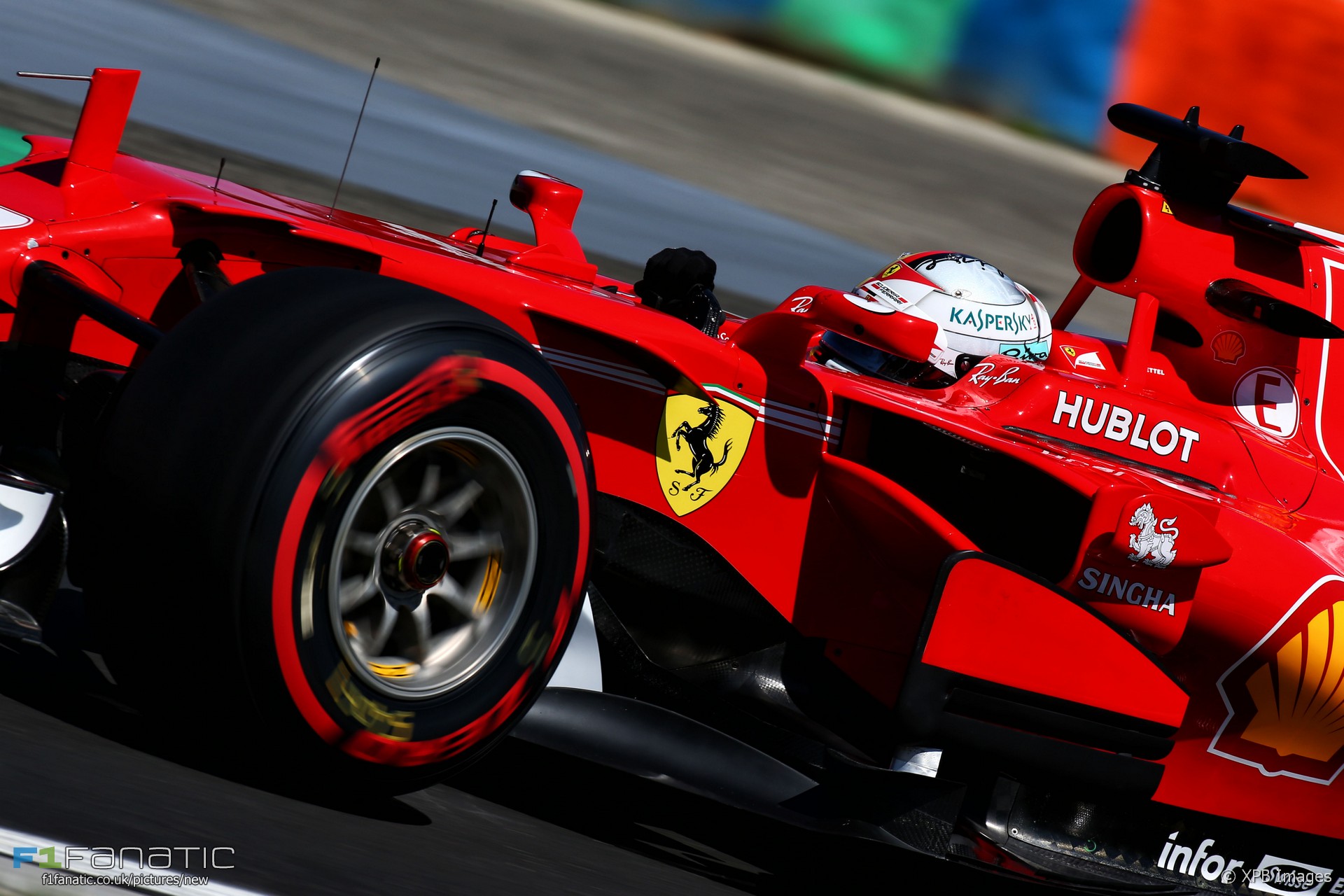 Sebastian Vettel’s pole position is only the third Ferrari have had this season. But every time they’ve taken pole they’ve also locked out the front row the grid.

Vettel’s rivals can draw some encouragement from the surprising fact that only two of the last nine Hungarian Grands Prix have been won from pole position. The SF70-H should be at least an equally competitive prospect in the race, however.

As was the case in Monaco Ferrari’s strong chassis is serving them well on a low power-sensitivity circuit with plenty of corners. But this isn’t the only factor driving their performance advantage this weekend.

Searing heat at the Hungaroring has swung the balance of power towards Ferrari – perhaps decisively. Red Bull led the way on Friday as track temperatures headed towards the mid-30s. But by final practice temperatures exceeded 50C and it was clear Ferrari were thriving in the hotter conditions. Their quickest rival was eight-tenths of a second behind them.

Mercedes made some progress with their set-up before qualifying and Lewis Hamilton set the quickest time in Q2. But as the pole position shoot-out began the asphalt was registering 56C.

Hamilton slipped off the track at turn four on his first run, resigning himself to a damage-limiting final lap to salvage fourth. Meanwhile Valtteri Bottas lost his grip on the front row.

The hike in temperatures is expected to last into tomorrow (and throughout next week’s two days of testing). The race stint simulations the drivers did on Friday were conducted on a significantly cooler track.

At present Pirelli believes a one-stop strategy is the best realistic option. Two stops are theoretically fractionally quicker, but the high risk of falling into traffic at a circuit where passing is difficult may put teams off it.

While the teams don’t know exactly what they’ll find in tomorrow’s hotter conditions, but Bottas has some expectations.

“For sure it’s going to be more tricky tomorrow than the long runs we did yesterday,” he said after qualifying. “But that’s going to be the same for everyone.”

“I think us, as a team, we have improved since some of the struggles we’ve had in hotter temperatures, it’s gone in a bit better direction.”

Bottas is the strongest-placed Mercedes on the grid, one place ahead of Hamilton and on the clean side of the track. In Russia he used the exceptionally long run to the first braking zone plus a headwind to get ahead of both Ferraris.

The Hungaroring also has a long dash to turn one, though at 617 metres it’s significantly shorter than in Sochi. And Ferrari will no doubt be planning how to box him and Hamilton in around the slow corners at the start of the lap.

Red Bull and McLaren continue the neat rows of team mates on rows three and four respectively. The upgraded Red Bulls could give the Mercedes a headache, especially if they’re close enough to use the ‘undercut’ to attack.

Given how quickly the rest of the cars tend to drop back, watch out for Red Bull gambling on an aggressively early first stop to attack the Mercedes, knowing a second pit stop could be viable for them. That may explain why they’ve saved a fresh set of super-soft tyres.

Realistically, McLaren’s best hope is to hold on to those positions and profit from any retirements ahead, while resisting the rapid Renaults behind them: Nico Hulkenberg would have started ahead of the Honda-powered cars had it not been for his gearbox change penalty.

Will Vettel extend his points lead ahead of the summer break? Or will this be another Hungarian Grand Prix where the pole sitter loses his advantage?

Share your views on the race in the comments.