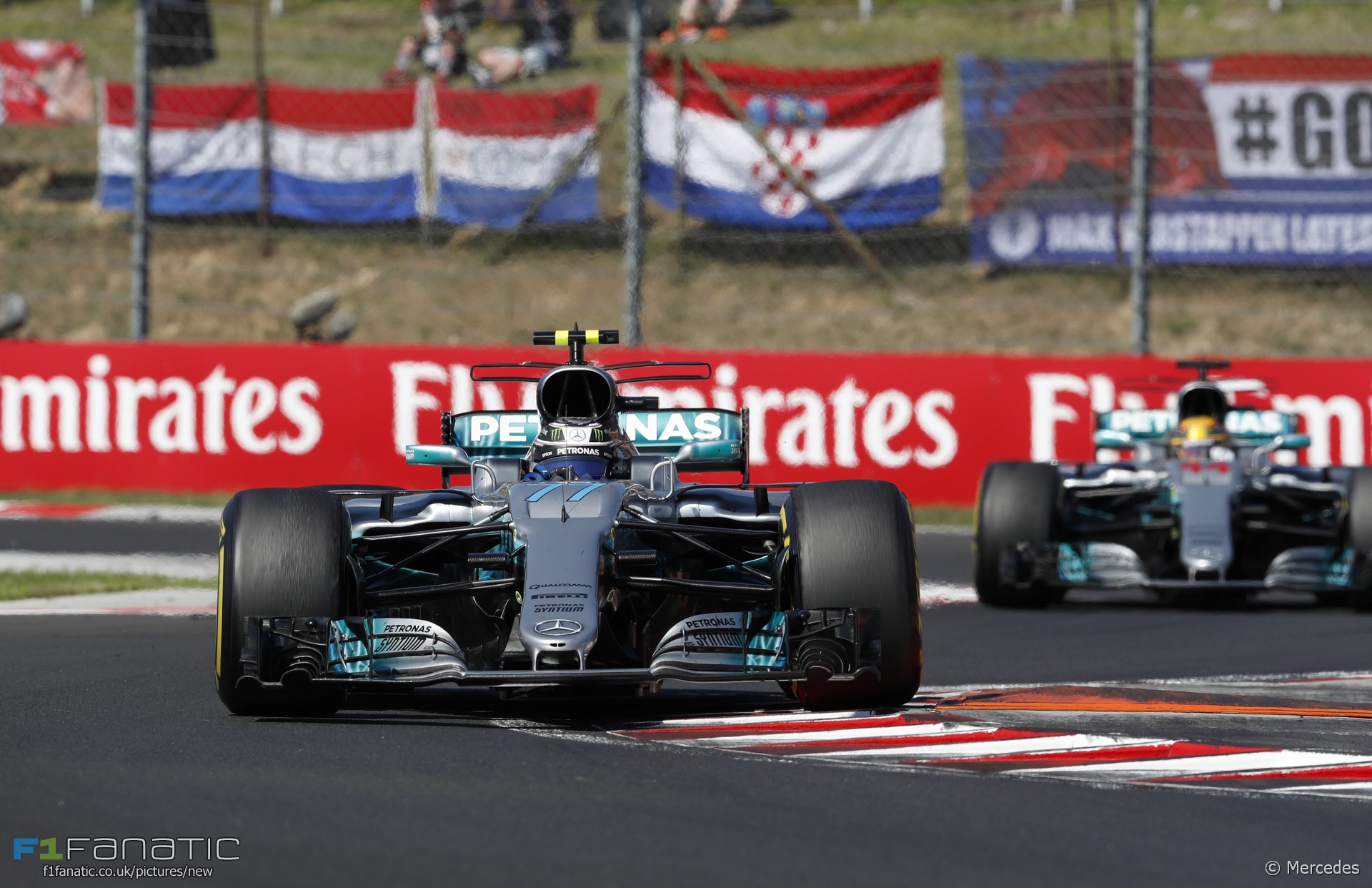 “I’m not slowing down for Nico.”

Lewis Hamilton’s attitude towards team orders at the Hungaroring was rather different three years ago when Mercedes wanted him to let Nico Rosberg past.

On Sunday, to the surprise of many, Hamilton pulled over on the last lap of the race to let Valtteri Bottas through into the final podium position.

So why did Hamilton handle things differently this time?

A change in approach

The first difference is obvious. In the previous three seasons Rosberg was his sole rival for the championship. This year Hamilton is fighting a war on multiple fronts, not only striving to keep ahead of Bottas but to beat Sebastian Vettel’s Ferrari too.

Still, one could ask why did Hamilton give Bottas the wave-by in Hungary when he didn’t in similar circumstances at Bahrain. On both occasions Bottas had let Hamilton past so he could try to pass a rival head, and both times Hamilton was unable to. In Bahrain Hamilton kept the position Bottas had given him, in Hungary he gave it back.

In the case of Bahrain, Mercedes said there was no question of making Hamilton give up the near-15 second lead he had over Bottas going into the final lap. In Hungary Hamilton’s lead was half that, 7.7 seconds, when he backed off to let Bottas catch up. This was despite Bottas having been told to stay close so Mercedes could “re-invert” the running order.

There were other differences between these scenarios. In Hungary their strategies were much the same, whereas in Bahrain Hamilton was running a different strategy which involved running a short final stint in an attempt to catch Vettel.

But a common thread running through Bahrain and Hungary was how accommodating Hamilton was towards his team mate. At one stage in Bahrain he told Mercedes he didn’t need Bottas to let him past as he wasn’t being held up. And in Hungary he volunteered the terms of the arrangement to let Bottas past if he couldn’t get ahead of the Ferraris. Hamilton was never this accommodating towards Rosberg.

There was undoubtedly an element of playing the long game about Hamilton’s decision. He made need similar favours in the future, and this kind of team orders ‘deal’ is something we’re starting to see more often. Though not all drivers have realised the value of them.

Team orders were crude implements three decades ago. Teams would hang out a pit board demanding their drivers hold position or reverse their running order, and the drivers would decide whether they felt like obeying them. Often, as in the famous cases of Carlos Reutemann at Williams, Rene Arnoux at Renault and Didier Pironi at Ferrari, they chose not to.

Now radio communications are more reliable, teams’ strategies are more sophisticated and, arguably, the importance of keeping drivers motivated by not humiliating them with team orders is better understood. This explains the rise of the kind of team orders ‘deal’ which Mercedes struck on Sunday.

One of the first times it appeared was in Monaco two years ago when Daniil Kvyat was told to let his Red Bull team mate Daniel Ricciardo past to attack cars ahead of them. Ricciardo was told to give the place back if he didn’t make any gains, none were made, so he let Kvyat past within sight of the chequered flag. Just as Hamilton did to Bottas last weekend.

Other teams have used the same tactic since. Toro Rosso attempted to in Australia this year, though one of their drivers subsequently retired.

And Force India attempted the same in Canada. But when Force India told Sergio Perez to let Esteban Ocon through on the condition he would get his place back if Ocon didn’t make any progress, Perez refused.

This example serves to illustrate why it was impressive that Bottas and Hamilton complied with their instructions. Perez and Ocon aren’t realistically in contention for the world championship, yet Perez was unwilling to swap places with his team mate. It makes the level of trust between Hamilton and Bottas all the more remarkable.

Could Ferrari do it?

It begs an obvious question: Would their championship rivals Ferrari do the same thing? And do Vettel and Raikkonen trust each other enough to comply?

Raikkonen has played the role of the obedient number two before, notably in 2008 when he was alongside Felipe Massa, despite being the reigning champion at the time.

Vettel, however, has at best a mixed history of doing what his team ask. He flagrantly defied an instruction to hold position behind Mark Webber in Malaysia four years ago, though Webber had also disobeyed a team instruction previously. In 2014 Vettel complied with one order to let new team mate Ricciardo pass him, then responded to another one with the words “tough luck”.

Perhaps it’s not even a case of whether Ferrari are capable of operating in this way, but whether they want to. The manner in which Raikkonen lost the Monaco Grand Prix to Vettel prompted claims Ferrari are paying lip service to the idea of treating their drivers equally while Vettel gets their more familiar ‘number one’ treatment.

We’ll only find that out which of these is true if Ferrari find themselves in the same position Mercedes were in last weekend.

As Raikkonen has increasingly got on terms with Vettel in qualifying of late – the score is 3-3 over the past six races – this may happen. However Vettel’s much greater lead over Raikkonen in the points standings is probably going to swing the balance before long.

135 comments on “Hamilton ‘paid it forward’ to his team mate but could Vettel do the same?”