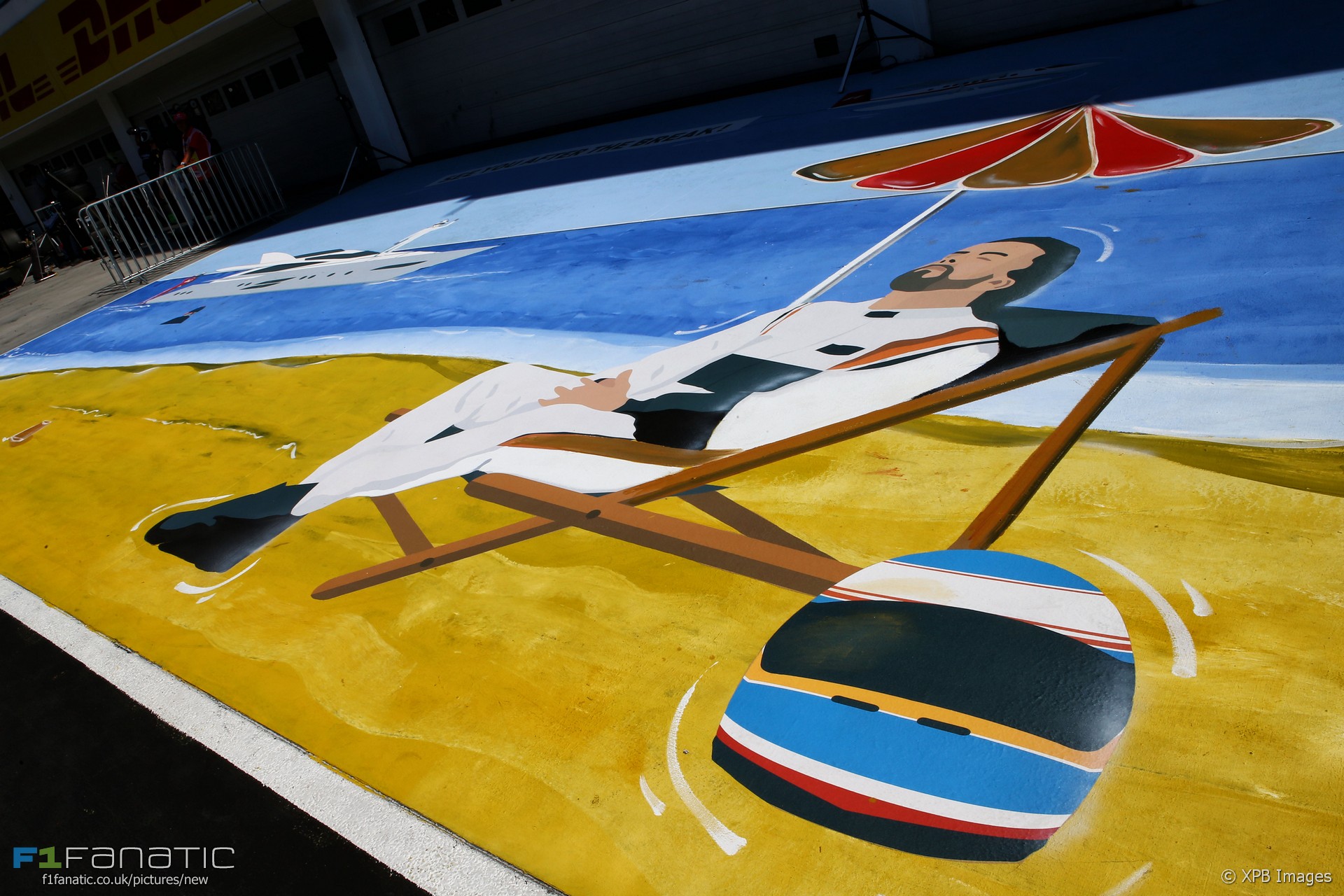 Fernando Alonso became the eighth different Driver of the Weekend winner so far in 2017 after finishing sixth in the Hungarian Grand Prix.

The McLaren driver produced one of the few passes of the race to get by Carlos Sainz Jnr and set the fastest lap on the penultimate tour. More than half of F1 Fanatic readers named him their top driver of the event.

Alonso joins Lewis Hamilton, Sebastian Vettel, Valtteri Bottas, Max Verstappen, Pascal Wehrlein, Carlos Sainz Jnr and Lance Stroll as the Driver of the Weekend winners from the first half of the season.

On a track where power mattered less than sheer downforce, McLaren enjoyed one of their most competitive showings of the year so far. Having expected this would be a better track for the Honda-powered car, Alonso had taken an engine change penalty in the previous round at Silverstone to avoid taking one here.

That paid off as he qualified eighth on the grid, which became seventh after Nico Hulkenberg took a gearbox change penalty. Alonso outpaced team mate Stoffel Vandoorne by three-tenths of a second.

In a hectic start, Alonso lost out to Carlos Sainz Jnr. When the Safety Car came in Alonso judged the restart perfectly, lining the Toro Rosso up for a pass, but was edged wide at turn one.

Curiously, Alonso followed Sainz into the pits for their only stops, but was visibly quicker when they rejoined the track. He quickly put Sainz on the defensive at turn one, then got around the outside of the STR12 at the following corner.

The leaders were long gone by now. But with Sebastian Vettel struggling due to his damaged steering, Alonso was able to lap quicker than them on more than one occasion over the final laps, and set the quickest lap of all on the penultimate tour, something which surprised even the two-times world champion.

He finished where the car deserved, but he had to work for it (and actually made a pass on track!).
@George

Alonso got fastest lap on tyres that were as old as everyone elses, and he’d overtaken Sainz with, in a McLaren Honda. Proving he’s still probably the best driver on the grid.
Hugh (@Hugh11)

The track gave the chance to get a decent result in an under-powered car with a functional chassis and he delivered. Clean laps throughout the weekend, limited errors, one solid overtake and fastest lap on race day.
@Pinakghosh

Interestingly both Ferrari drivers picked up a substantial chunk of votes, but the one who started and finished ahead got slightly more:

Vettel got my vote by a hair’s breath from Alonso.

There was clear visual evidence about Vettel’s leftward skewed steering wheel and on a clockwise circuit he would have to compensate by oversteering on most turns. He would have to slow down at least a little more than planned to carry out the team’s ‘avoid the kerbs’ instruction under those circumstances. He managed it and so did a great job under difficult circumstances.
@Loup-garou

Alonso did great, but with so much at stake, Vettel shone with a couple of top qualifying laps, and nursed a car problem (that could easily cost him) the whole race to the win. Each race lap had to be top notch and it must have been nerve-wracking throughout.

Voted for Di Resta, what he did this weekend was pretty impressive.
@Jaymenon10

Just watched #HungarianGP. Well, Kimi and Max, you disappointed me

So good to see Fernando Alonso getting in the points, and to get fastest lap with that engine is incredible. #HungarianGP

Can we get T-shirts that say "Jolyon is slower than you"? Asking for a friend. #f1

Full credit to @PaulDiResta on an accomplished day standing in for Felipe Massa. He made great progress. #F1 #HungarianGP

So annoying Alonso doesn't have a good car, every race he shows he's better than the car, waste of talent #HungarianGP

And congratulations to @alo_oficial for fastest lap and best result of the year at the #hungarianGP. Well done, mate ;) @McLarenF1

Say what you like about @LewisHamilton, he is streets apart the best F1 driver.

Great to see @PaulDiResta back in F1, shame you had to stop early but great to see you back!

I've got to say, the way Palmer avoided Riccardo was awesome.@C4F1 #HungarianGP #F1

Since @alo_oficial started driving F1 I support him in every races. Today he finished 6th and Im really happy to see him driving good again.

Are all F1 drivers stupid? Why do they all go for it at the start? Have they never heard of "to finish first, first you have to finish"

Max is just a freaking rookie … will never admit it .. #HungarianGP

What a great #HungarianGP . One of the best battles for ages! Great stuff! Plus kudos to @PaulDiResta @WilliamsRacing

Great to see Paul di Resta back in F1 today.

It's difficult to understand why #FernandoAlonso ends up in much slower cars. But it gives us the chance to see just how magical he is.

Hope Kubica flies in this test and can replace Palmer from Spa, Palmer hopelessly out of depth in F1

JESUS. I think Max was at fault but 10 seconds?! That's a bit much. #HungarianGP

Al_oficialo So proud of you today (and always) what a racer you are, the king of F1.Enjoy your break, watch you again in a month!

If Seb wins the title,its a shame imo.Kimi always needs to help him like today.Ham was a gentleman and let Vb77 past #hungariangp #f1 #kimi

If you watch @F1 and you're not a @KevinMagnussen fan after today then I don't know what to tell you.

Is @McLarenF1 @HondaRacingF1 getting the fastest lap one of the signs of the apocalypse ? #HungarianGP

Glad to see @McLarenF13 in one and two in today's #F1 race. Well done, Sebastian and Kimi!

About time the FIA punish verstappen! Kid is a liability! #F1

Kevin Magnusson what are you doing
"Suck my balls"#F1#HungarianGP

Great for once not to hear HAM complaining after a poor weekend. It's almost unheard of… #F1 #HungarainGP #SkyF1 #Mercedes #Ferrari

Well done to @McLarenF13 for 1/2. .#HungarianGP keep you're minds focused all the way to Abu Dhabi. …

The last-lap change of position between the Mercedes drivers was one of the big talking points after the race.

While a few felt Hamilton was merely doing what should be expected of him by letting Bottas past for third place, most praised him for his “sportsmanship” – even some who admitted to not liking him.

Vettel would not have moved over…… This could be the difference I'm afraid and @LewisHamilton knows it. Fair play though #HungarianGP

Lewis Hamilton bottas True gentleman and the greatest F1 drive to ever exist. Phenomenal drive and a gesture of a true sportsman

Dear #totowolff Don't ask your drivers to EVER do that again. Neither of them gain anything, but lose a lot..#lewishamilton #F1

Verstappen really could have won that race today, Hamilton should have kept 3rd though but fair play for switching back #HungarianGP

Lewis Hamilton was very sporting in giving up his place on the podium to Bottas. I doubt he would have done that for Nico Rosberg #F1

Hats off Hamilton, credit where credit due for giving place back. Alonso fastest lap, you are the man! #HungarianGP #F1 #C4F1

How much more help does Vettel need to win the championship. Should've let Kimi race!#HungarianGP

#Raikkonen should've fought with the team order or at least admitted it. Contrary, #Hamilton's become a man of credibility. #HungarianGP #F1

God the amount of discussion. Imagine if Lewis hadn't let him past. Can't please everyone can you. #HungarianGP

Fair player of the day was @LewisHamilton @MercedesAMG @sebvettelnews would do the same? @F1 @F1LatinAmerica

Nice touch by Hamilton at the end of the #HungarianGP #C4F1

Wonderfully sporting move by HAM to let BOT through—won't look so good come November, though, should he lose WDC by 1 or 2 pts. #HungarianGP

Tbh, that was great from Hamilton. Well done to Seb though, well managed race considering the issues he had. #C4F1 #HungarianGP

#F1 is ill. RAI doesnt attack VET. BOT lets HAM through. VES gets punished. All these should be racing each other. #stopteamorders #noradio

Very noble decision by Hamilton to let Bottas through. But if Lewis loses the championship by 3 points, a lot of questions will be asked #F1

Nice touch that by Lewis. Must kill competitive types to drop points. The #F1 team rules are a bit odd though.

Not a great race, shame for Ricciardo but great result for the McLarens and great sportsmanship from Hamilton #HungarianGP

Proud of the sportsmanship and code of honour @LewisHamilton showed toward the end of today's #HungarianGP. #RiseAndFallTogether. #TeamWork

HAM, of all people, actually kept his promise and gave BOT the position back, yet PER couldn't do it with OCO. Like… Um… #F1

Anyone who slates @LewisHamilton, watch the #HungarainGP. True sportsmanship behaviour from a World Champion. Not many would do that. #F1

Hats off to Lewis Hamilton, I really didn't think he's give that place back #HungarianGP

What have I just watched in the F1. The Mercs trading places was pathetic. What was that all about? #afteryounoafteryou #f1

Impressed that @LewisHamilton let Bottas though, great sportsmanship!Have a good holiday & come back stronger for the 2nd half! #teamLH #F1

Bravo @LewisHamilton for coming in 4th. Let's hope it won't come down to that but great display of team sportsmanship. #HungarianGP