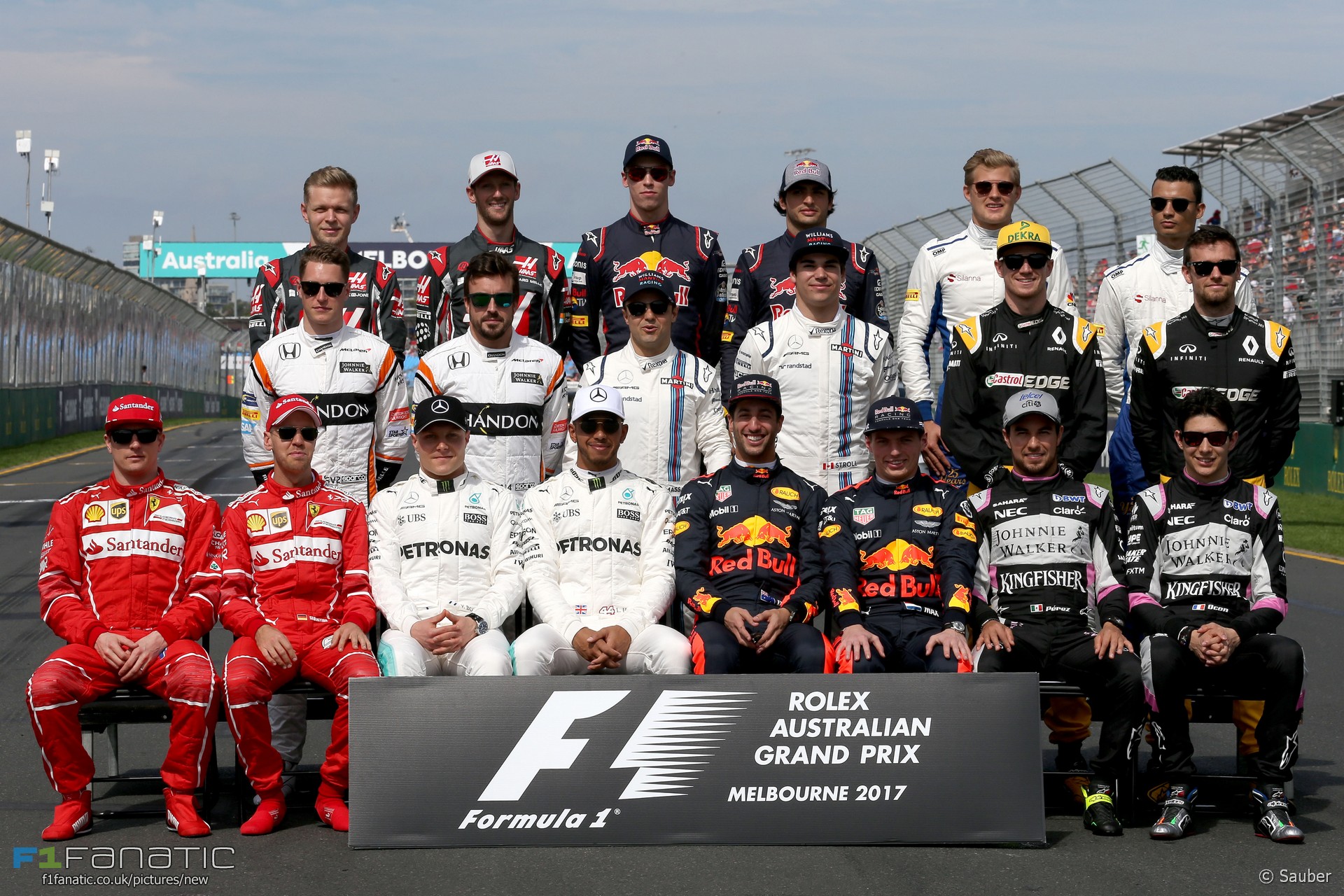 Formula One returns to action next week but which drivers performed best before the summer break began?

It’s time to take stock of the season so far and judge who’s starred and who’s struggled so far in 2017. Before the season began Jolyon Palmer said he was relishing the opportunity to be compared against a driver of Nico Hulkenberg’s calibre. It’s doubtful he still feels the same way.

He’s been blown away in qualifying. His average deficit of 1.02 seconds is exaggerated by Australia, where a car problem meant Palmer posted an unrealistically slow time. But even when that’s factored out his average deficit becomes 0.77 seconds which is still the worst of any driver.

Although he’s been classified ahead of Hulkenberg twice, on one of those occasions Hulkenberg had stopped in the pits before the end of the race.

Austria has been his only highlight so far. He was just 0.17s off Hulkenberg (on the shortest lap of the year so far) and finished ahead after his team mate made a terrible start. It was Palmer’s third 11th place finish in four races, so although he hasn’t scored a point yet he has come close.

But under the circumstances the rumours over his future at the team can hardly have come as a surprise. At first glance Marcus Ericsson’s season stats look fairly good. Then you realise two of the four occasions he beat his team mate in qualifying was when he was up against complete novice Antonio Giovinazzi.

On the favourable side he’s usually steered out of trouble and brought the Sauber home, though Pascal Wehrlein has regularly had the beating of him. Nonetheless Ericsson might have had a point in Baku had he not been asked to let Wehrlein through.

That aside, the only memorable moment from his first 11 races was his crash while the Safety Car was out during the Monaco Grand Prix. Over a single lap Daniil Kvyat can do at least as good a job as Carlos Sainz Jnr. Indeed he’s been fractionally quicker than his team mate on average (although that 0.04s advantage becomes a 0.06s disadvantage if you factor out Sainz’s suspension failure at Silverstone).

But stringing together enough fast, trouble-free laps for a race distance has been a problem for Kvyat, as his points deficit to Sainz attests: Sainz has out-scored him almost nine times over. While Sainz makes regular incursions into the points, Kvyat finishes outside them more often than not.

Not all of this has been Kvyat’s fault. The usual Toro Rosso unreliability has affected him more than it has Sainz. In Spain and Monaco he was hit by other drivers.

But when it comes to on-track contact he dishes out plenty as well. Austria, where he took out Fernando Alonso and Max Verstappen, was like watching a replay of the race which cost him his Red Bull seat last year. Then at the very next round he eliminated his team mate for good measure.

Whether he remains with the team in 2018 is one question, but they may be forced to act before then, as Kvyat’s too-frequent indiscretions have left him just two penalty points away from a race ban. Lance Stroll has been an enormous disappointment to his critics. Having arrived in Formula One with vast backing from his billionaire father, he has been far from the careless hothead some expected.

So much so that in Baku, where driver after driver ran into trouble, he came away with a shock podium finish – the only one so far this year for a driver not in a Mercedes, Ferrari or Red Bull.

But that result was the exception to the rule. And the low expectations many had for him do not make his performances any better. There’s little difference between his record against Felipe Massa and Palmer’s against the arguably stronger Hulkenberg.

There have been signs of improvement. He looked ragged at the wheel in the opening races but has clearly calmed down. And he’s steered clear of trouble better than quite a few drivers. His money will no doubt continue to buy him time to prove himself, and he may yet do so. Being paired with a very competitive team mate in a car which is both slow and unreliable is the worst possible combination for a rookie driver. Particularly one who brings some weight of expectation, as Vandoorne does.

His qualifying scoreline is comparable to that of Lance Stroll and Jolyon Palmer. But you have to consider the calibre of driver they are up against. No one is seriously going to suggest Felipe Massa or Nico Hulkenberg are at Fernando Alonso’s level.

Significantly, Vandoorne’s lap time deficit to Alonso is much less than either of those drivers have to their team mates. It’s a further indication Vandoorne is doing a decent job under the circumstances. Like Alonso, he’s lost a lot of track time to technical problems.

Vandoorne’s been ragged at times, though. His collision with Massa in Spain was silly, and he seemed to be over-driving in Monaco, one of few tracks where the MCL32 was an effective machine. He made better use of it in Hungary, claiming his only point so far this year. Both Haas drivers have struggled to deliver regular results, though newcomer Kevin Magnussen has been further from the mark than Romain Grosjean. His performances haven’t been as ‘peaky’ as his team mates – the lows not as low, but the highs also not as outstanding.

The fluctuating competitiveness of the Haas VF-17 has at least something to do with that. In Austria, where it was going very well indeed, Magnussen’s car let him down in qualifying and the race.

Qualifying has been a general weakness, notably in Australia, Bahrain and Britain. At Silverstone he failed to make it beyond the damp Q1 while Grosjean reached the top ten, but had a solid race.

His feisty exchange with Nico Hulkenberg in Hungary threw light on what had been a silly move by Magnussen which earned him a penalty which could have been easily avoided. Incidents like this tip the balance slightly negative for his season so far, but it wouldn’t be a surprise if he hasa stronger second half. Although Pascal Wehrlein owed some gratitude to his team mate for the point he scored in Azerbaijan, he fully deserved the four he collected in Spain. A one-stop strategy put him on course for the points, though a pit entry penalty meant he came away with slightly less than he should have done.

Having missed the first two races of the season due to injury, Wehrlein impressed by hitting the ground running in Bahrain. He put Ericsson firmly in the shade and nearly collected a point then too.

Since then he’s only been out-qualified by Ericsson twice: Once was in Canada, where Wehrlein spoiled his day with a crash, and the other was in Austria, where he had a power unit problem. On the latter occasion he started from the pits and still finished in front of his team mate. In must be galling to Felipe Massa that despite having dominated Stroll all year long, it’s his junior team mate who scored the team’s single best result so far, in Azerbaijan.

Massa was running ahead of Stroll until he suffered a suspension failure and it’s likely he would have finished second at minimum had his car kept going. Had it done so, the points difference between them would be more reflective of Massa’s consistently superior driving.

Williams started the season in good shape and have been on a downward trajectory since then. Massa was the first driver home after the drivers from the ‘big three’ teams on two occasions, but the speed with which Force India gain the upper hand left you wondering whether a driver less close to retirement might have got more out of the car.

Arguably he best drive was in Monaco, the kind of slow track the FW40 does not thrive at, where he nonetheless delivered a points finish. In China, however, he struggled with his tyre temperatures in cool conditions. He’s got Stroll comfortably handled but the gap could probably be bigger. It’s painfully clear that Romain Grosjean craves a promotion to a championship-contending team, but you have to wonder whether he’s proving he deserves such a chance at the moment.

His performances have been great on occasions. He was superb in Monaco where he qualified well and only lost a place to Lewis Hamilton during the race. In Austria he only had the faster Mercedes, Ferraris and a Red Bull ahead of him at the flag.

But his form is volatile, prone to dips linked to his team’s persistent problems with his brakes. Races like Russia and Azerbaijan, therefore, were a complete disaster, punctuated by seemingly endless furious radio messages and off-track moments.

More consistency is clearly needed in the second half of the season if he’s to decisively claim the tag of ‘midfield driver who most deserves a promotion’. On the face of it Esteban Ocon has been beaten handily by Sergio Perez so far. But scratch beneath the surface and it’s not hard to see why he has impressed Force India so much.

Barring a few run-ins with his team mate, not all of which have been his fault, Ocon has consistently brought the car home and added to the team’s points total in 10 of the 11 races so far. He’s scored 44.5% of the team’s points, more than the two Williams drivers combined.

While Perez has usually out-qualified him, the average difference between them has been less than a couple of tenths, which is very respectable. Ocon would have been closer in Spain if he hadn’t forgotten to open his DRS.

His tangle with Perez in Azerbaijan was careless and there was more than a touch of over-exuberance about his driving in Monaco, but this really has been a fine first half of the season for Ocon.

How do you rate the performance of these ten drivers? Should they be ahead of any of their rivals based on their performances so far this year.

Have your say in the comments and look out for the second part of the mid-season driver rankings on F1 Fanatic tomorrow.