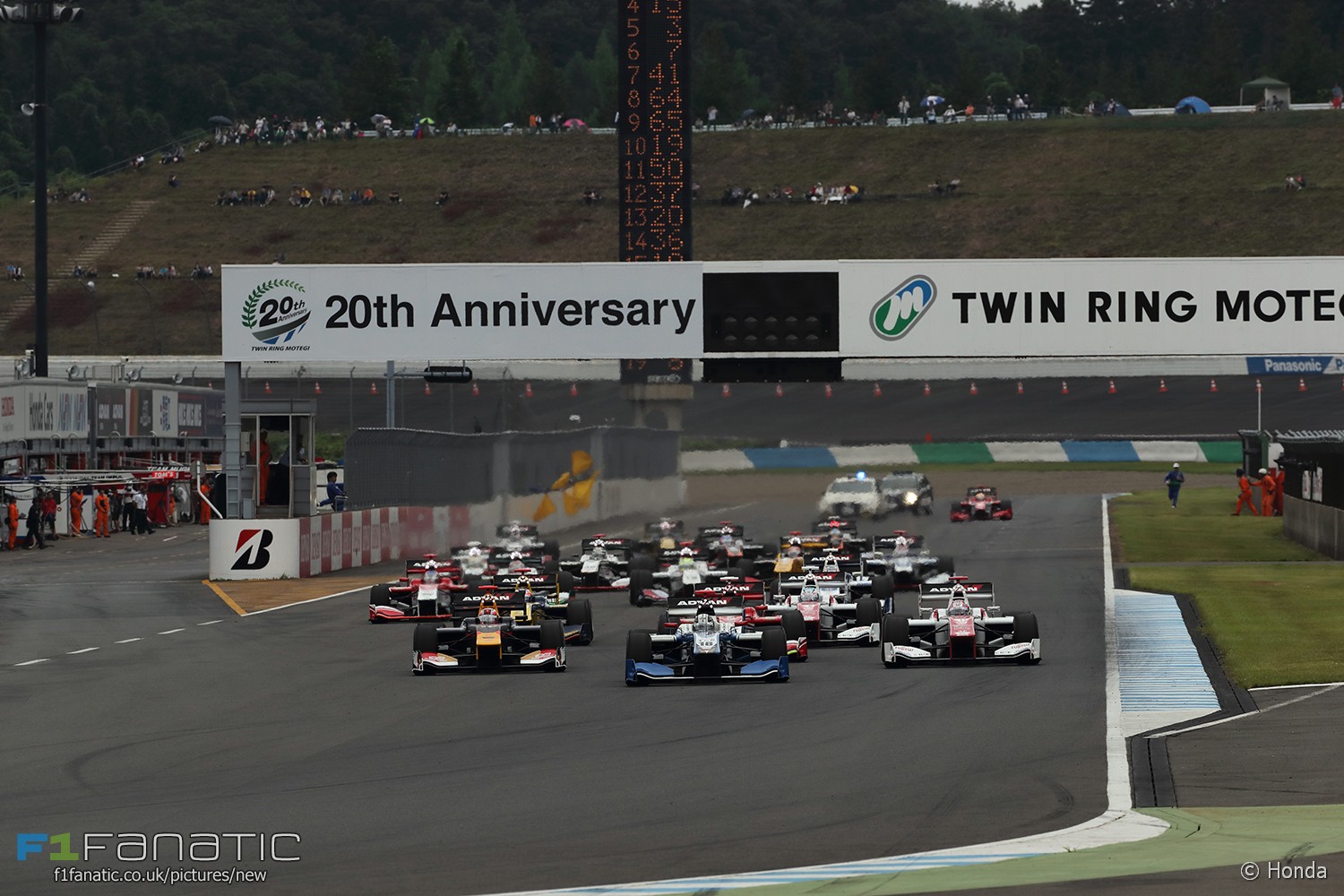 A pair of victories for Norris at Zandvoort put the rookie on top of the European Formula Three points table with nine races to go. And Gasly took his first win in Japan’s highly specialised Super Formula series in the fifth race of the season.

Also last weekend Will Power kept his IndyCar championship hopes alive by winning from a lap behind at Pocono, Marco Wittmann lost a DTM win due to a technical infringement and the World Rally Championship lead changed hands.

Norris was untouchable in the opening race, winning from pole with fastest lap by nearly nine seconds ahead of Joel Eriksson and Maximilian Gunther. There was a scary incident at turn one as Guan yu Zhou collided with Ralf Aron, who in turn hit David Beckmann with the latter’s car ending upside down in the gravel, though thankfully Beckmann escaped uninjured.

Norris took pole for race two but was penalised two places for a yellow flag infringement, and Callum Ilott duly made good of the pole he gained, by winning the second race for his fourth victory of the year. Three compatriots followed him home in Jake Hughes, Norris and Harrison Newey, and with Gunther only seventh Norris took the championship lead by one point.

Norris was once again untroubled in race three to win from the front, while another strong race from Ferdinand Habsburg saw the Austrian royal take his third podium of the season. Third for Gunther limited the points loss to Norris, but two non-scores for Eriksson saw him slip 55 points off the lead.

Gasly qualified fourth but jumped to second by running long before his pitstop, and he gained the lead when former Formula One driver Kamui Kobayashi had a lengthy pitstop with a problem on his right rear wheel. Kobayashi recovered to finish second however, while Formula E driver Felix Rosenqivst completed the podium.

Will Power spectacularly won the Pocono 500 for the second year running despite running last and a lap down at one stage in the race thanks to an unscheduled pit stop to change his front wing.

With Power out of the picture at the start, it was left to Scott Dixon and Tony Kanaan to battle for the lead, with a number of other drivers joining in over the first three quarters distance. Over the race ten drivers led, with a Pocono-record 42 lead changes, with Ryan Hunter-Reay also involved until late on, despite a qualifying crash yesterday that left him with left hip and knee injuries and starting at the back of the grid.

Despite changing his front wing Power was still slow after contact with Charlie Kimball damaged his rear wing, but a big crash between JR Hildebrand and James Hinchcliffe – in which bizarrely both took the blame and apologised to the other – gave Power the chance to fix the damage. He then stayed out longer as the leaders pitted and gained a five second advantage, and despite Josef Newgarden and Alexander Rossi closing at the end Power held on for his third win of the season.

Newgarden extended his championship lead to 18 points over Scott Dixon by finishing second. Power remains behind his other two Penske team mates Helio Castroneves and Simon Pagenaud in fifth place, all still with a realistic chance of taking the title in three races’ time.

Marco Wittmann was stripped of his victory in the second DTM race of the weekend at Zandvort when his car was found to have insufficient fuel to give a sample post-race. That promoted Mike Rockenfeller to first place ahead of Loic Duval and Mathias Ekstrom.

Timo Glock took his second pole position of the season for the first race but unlike in Hockenheim he was able to convert it to his first victory of the year. Glock made an early stop on lap eight and was attacked by Marco Wittmann as he left the pits, the reigning champion having already stopped. The two ran in tandem until the end, with Maxime Martin completing the podium, the top three crossing the line with one second. Championship leader Mattias Ekstrom retired with just a handful of laps to go following an earlier off-track moment.

Augusto Farfus took pole for the second race, a highlight of a rather disappointing season so far, while Timo Glock went from hero to zero as he was excluded from qualifying for excessively blocking Edoardo Mortara in a furious moment (see below). Farfus couldn’t hold on however and slipped to ninth as Wittmann took the flag first ahead of Rockenfeller. A late stop – coupled with incredibly slow pace from Ekstrom behind – saw Loic Duval rejoin in third, a position he would hold until the end, taking his first points and podium in the DTM.

Kyle Busch repeated his 2010 trick of sweeping all three NASCAR events at Bristol, capping it with a win in the cup race on Saturday. He held off a determined Erik Jones, who led more than half the race in his bid to win his first race.

Ott Tanak took his second win in four rallies to become the first man since Sebastien Ogier in 2010 to win his first and second rallies in the same year, while the championship battle swung once again.

A wet opening day set the order, with Tanak taking a surprise lead – the M-Sport driver having never before even taken a podium on a Tarmac surface rally – after a tight battle with Andreas Mikkelsen. Thierry Neuville and Ogier were in an equally tight battle for third, but only after the former’s team mate Dani Sordo threw his Hyundai at the vineyard on stage four. Meanwhile Kris Meeke wrecked his rally after just a few hundred metres on the opening super special stage on Thursday night, clipped a concrete barrier.

The championship swung on Saturday however, as an unfortunate incident for Neuville took him out of the rally, and left Ogier in a comfortable third. From there the rally ran largely without incident to the end, save for a number of small mistakes for various different drivers that cost handfuls of second each time.

Therefore Tanak took his maiden tarmac win ahead of Mikkelsen – in what is currently scheduled to be his final 2017 outing in a WRC car – with Ogier third. The latter also took two points on the power stage to move ahead of Neuville by 17 points, with Tanak just 16 further back.

Formula One returns after the summer break this weekend. Formula Two and GP3 will be supporting and the following series are in action too:

4 comments on “F1 juniors star at Zandvoort and Motegi”