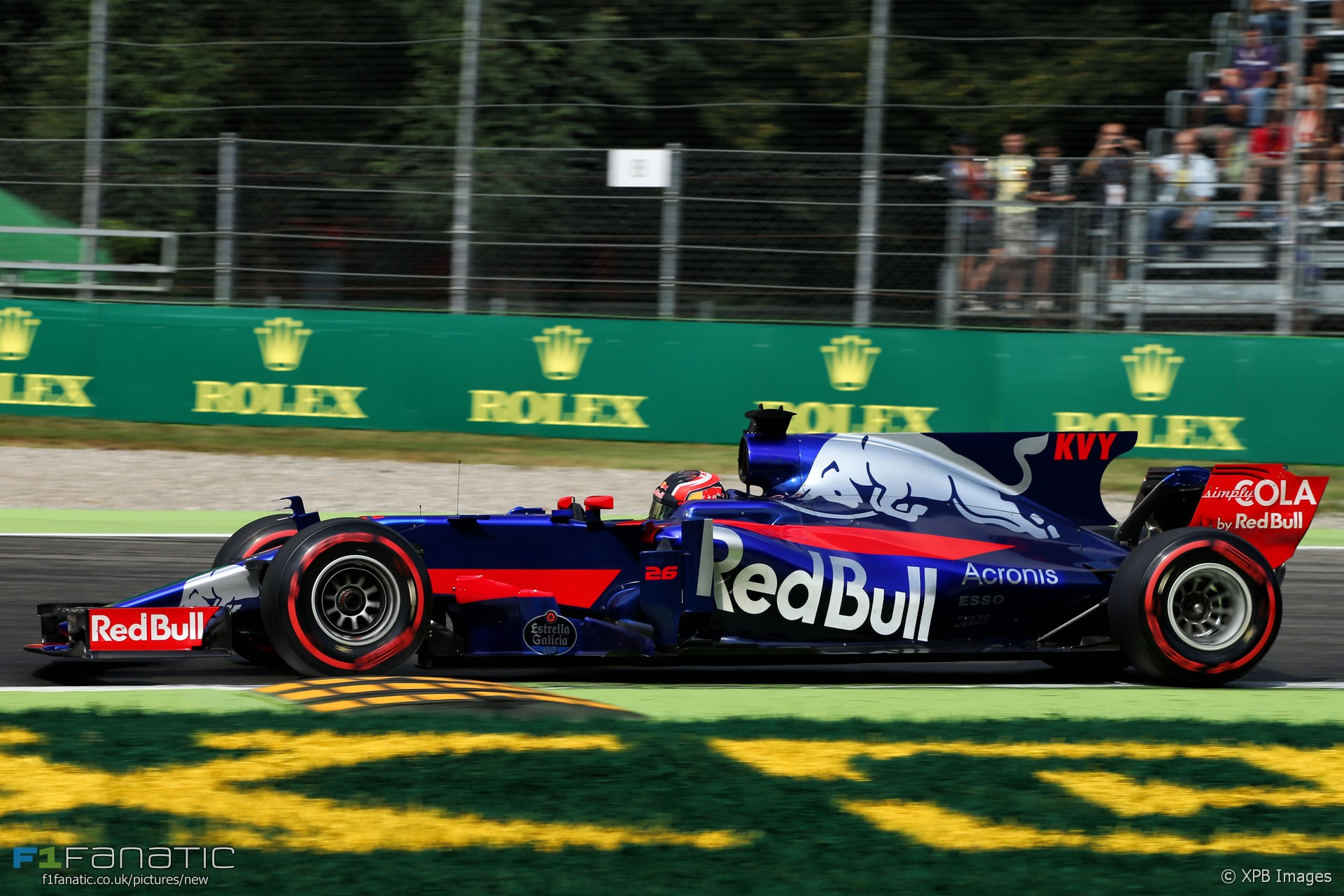 Daniil Kvyat was at odds with his race engineer about whether rain was falling during practice at Monza.

As first practice began the teams were concerned they wouldn’t get much dry running.

To Raikkonen: “Kimi we go for DRS in case this is the only dry lap. Just to check we have no issues on this wing with DRS.”

To Ericsson: “OK Marcus can we have brake composition seven please. And your tyres are very cold. Box this lap, no more cruise.”

Perez: “How are the tyres?”
“Tyres are OK. Just remember in our, in our switch position, forward brake balance.”

Race control had told teams the chance of rain was “60%” but despite the occasional light shower the session stayed dry.

To Raikkonen: “OK DRS on in the middle of the straight, then back off it.”

To Bottas: “There’s a couple of marshal points showing some rain so keep an eye on that, we’ll do a start.”
To Bottas: “Not expecting much from the rain, could just be a bit of light rain.”

To Grosjean: “We do need to avoid any more sausage kerb just to protect the T-tray, it’s on the edge.”
To Perez: “It will be run switch ‘practice’, tyres are still low.”

To Verstappen: “There is the possibility of rain in the next two or three minutes. It’ll come at turn 11 first. Stay out one more lap.”
To Vandoorne: “Orange E3, green F3. Fernando will tow to turn four.”

“Do you feel vibrations in high speed?”
Vandoorne: “No.”
“OK thank you.”

With the conditions dryer than expected, drivers had the opportunity to do more running.

“OK Fernando G10. If you’ve got a read for balance then I suggest box this lap. Perez is plus three.”
Alonso: “I don’t know, maybe another lap would be nice.”
“OK understood we’ll do one more lap. Perez plus one then Wehrlein plus ten.”

Perez: “Do we need to carry on like this? I don’t think we need to.”
“Box, pit confirm, cool the brakes.”

However Lewis Hamilton was concerned about not putting too much wear on his power unit.

Hamilton: “It’s stopped spitting around the back here. But this engine, I just want to save the mileage.”
“Raining in the pit lane now very light so box, box. Showing more rain now towards turn eight.”

Vandoorne: “You think the Sauber is high fuel?”
“That’s possible.”

Kvyat: “It’s raining again.”
“OK we don’t have any rain from the stewards but understood.”
Kvyat: “Well I believe what I see.”

The track stayed dry again for the second session.

Grosjean: “I think we are too low on the front. Touching under braking quite a lot. Much more than the morning.”

Lance Stroll got a few tips but spun his Williams later on at Ascari (turn eight).

To Stroll: “OK we think we can brake slightly later for four, carry more minimum in and then position the car better.”

“Constant speed out of seven, DRS on, off, on like this morning.”
Vettel: “OK got it.”
“Track is still clear behind.”

Vettel: “What’s the traffic behind?”
“Wehrlein, Perez out lap. Kimi behind Perez out lap as well. Prepare your lap, engine five.”

Massa: “I just ran into the gravel a little bit so I try next lap.”
“Understood.”

Kvyat was unhappy with Hamilton’s driving.

Kvyat: “Can I try to find the tow please. Finally, Jesus.”
“Box, box. That’s not the answer, Danny. Watch your mirrors for Hamilton on push lap.”
Kvyat: “Yeah sure I’m going to watch it very well. Like he did with me.

Fernando Alonso encountered more Honda power problems but McLaren were able to get on top of it.

Alonso: “Tell me the gaps all the time.”
“Stoffel plus five.”

Hamilton: “Got a lot of de-rates and my seat’s very hot.”
“OK. The de-rates are to be expected.”

“Are those vibrations only in eight?”
Vettel: “Big stops: One, eight, eleven.”

To Raikkonen: “Engine eight Kimi. Just ignore the hot water alarm I’ll let you know if we need to do anything.”

“Virtual Safety Car. Stay positive in each mini-sector. Lap mode Safety Car In.”
Raikkonen: “OK I have a lot of difficulty with the balance. It’s not nice at all. Very loose feeling in entry and mid-corner understeer. We can keep doing with these tyres but it’s not going to help anything.”
“OK understood Kimi I’ll let you know what we’re doing.”
Raikkonen: “It feels like the front is too sharp but then in the mid-corner I’m lacking a lot of front again so I can’t really get the car turned but I cannot even try to go fast in the corner in the first place. Can we come in and we drop the front wing, see what happens with that. Can I come in?
“OK box and do a front wing adjust. Box this lap, Kimi. So slow down a little bit, Kimi.”
Raikkonen: “Take one out.”
“Yeah we’ll take one out. Do grip 11 Kimi. We’re not changing tyres.”

One comment on ““I believe what I see”: 2017 Italian GP practice team radio highlights”