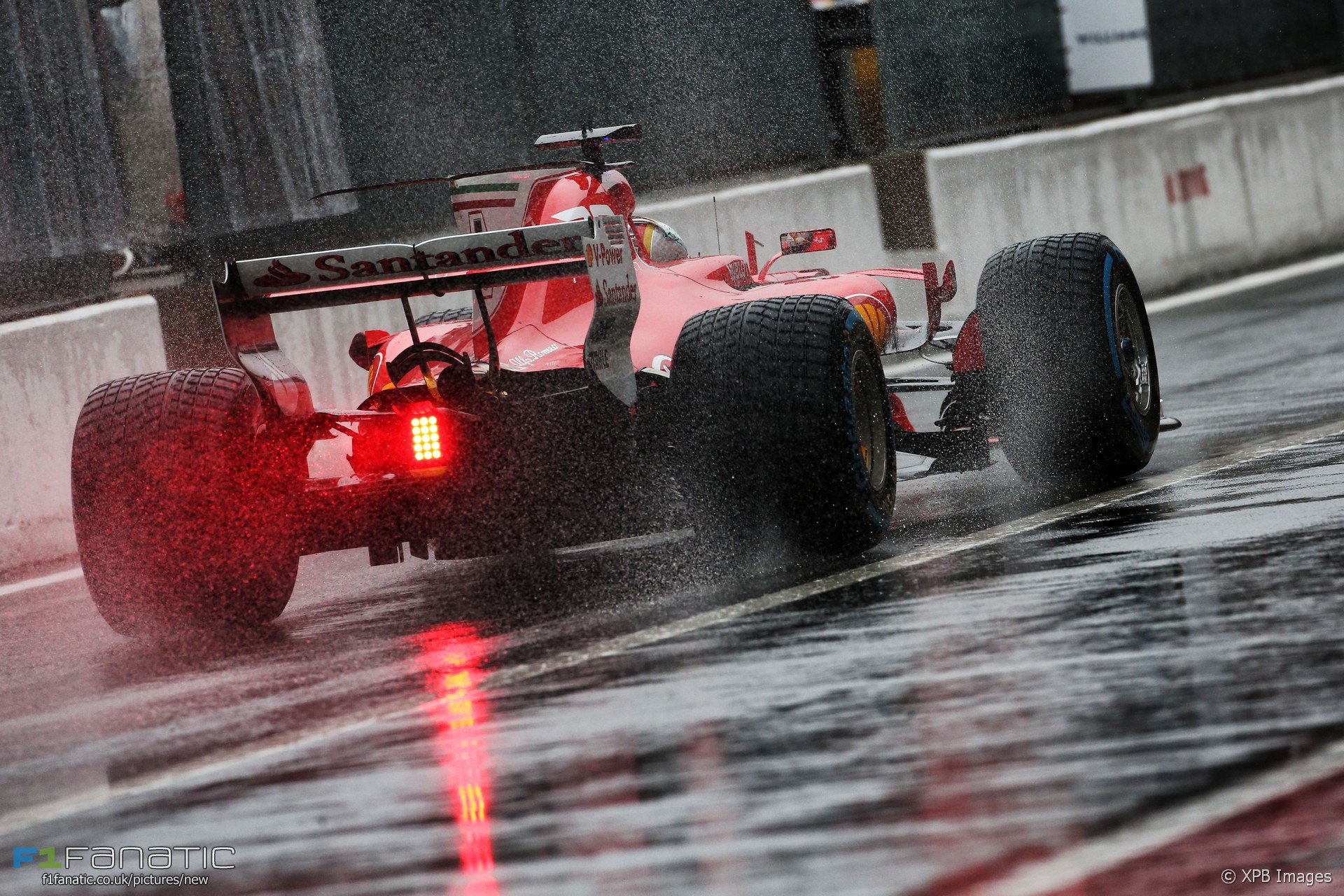 Rain was the big talking point on day two at Monza. Several drivers complained about the conditions before qualifying was delayed for over two hours.

The final practice session took place in heavy rain. Red Bull made sure their drivers were the first to join the track when the green light came on with just 16 minutes left to run.

To Ricciardo: “OK Daniel sorry to send you out to get wet. Three minutes to go.”
To Ricciardo: “When we start just do a normal pull-away from the end of the pit lane and then get out and have a feel. No procedures.”

Verstappen: “Are we doing a practice start?”
“Negative. Straight out.”

To Ricciardo: “OK Daniel one minute.”

To Raikkonen: “This could be the part of the session with the least rain, there could be some rain to come shortly.”

Perez: “So what do we think man?”
“From our side, box. Lot of aquaplaning on the start/finish straight.”

Kvyat: “There is too much water approaching turn one.”

To Hamilton: “Just remember this is a potential qualifying tyre so don’t damage it.”

“If you are coming in use Lap Mode Safety Car.”
Raikkonen: “Yeah I don’t know yet.”
Raikkonen: “I’ll go around once. I’ll take it easy on the main straight.”

The track was very wet when qualifying began. Several drivers complained about aquaplaning and a crash for Romain Grosjean brought out the red flags.

To Vandoorne: “Track’s green but we’re going to let these cars go.”

Hamilton: “Can I drop back because I can’t see out here.”

“OK that’s it.
Grosjean: “It was stupid to let us qualify, it was stupid.”

“You were purple in sector two, three-tenths shy in sector three.”
Verstappen: “Yeah, I couldn’t see.”

Raikkonen: “There’s aquaplaning on the straight.”

“Magnussen: “Tell Michael to helmet with the air intakes the opposite way, I’m getting a lot of water in my helmet.”
“We’re calling him.”
Magnussen: “Obviously as you saw there’s a lot of aquaplaning on the straight.”

Kvyat: “We’re aquaplanaing like hell.”
“It’s the same for everyone, Dany. We’ll do something with the pressures.”

Verstappen: “It’s really slippery on the main straight and in the first few corners.”

Once the session resumed drivers were quickly able to use the intermediate tyres.

To Bottas: “So just leave in order unless somebody stalls.”

“OK Carlos in front of you is the Sauber. Let the Sauber by. He has to be in front.”
Sainz: “Understood.”

To Hamilton: “30 seconds. Remember leave in the order you arrived. Normal pull-away.”

To Verstappen: “Feedback on the conditions Max on your way around.”

To Vandoorne: “Focus on the brake warm-up and you can make the gap at the end of the lap.”

Verstappen: “It’s better than when we started qualifying.”
“OK stay on full wets.”
Verstappen: “For the moment yes because of the main straight.”

To Kvyat: “A big queue of cars forming in turn 11. Don’t get too close, take some early margin.”

“There could be more rain coming. Keep pushing.”
Raikkonen: “The car feels on the nose.”
“Understood.”

Verstappen: “We can go quite soon to inters.”
“OK copy. We’ve got time for five total laps.”

Verstappen: “For the moment very low grip on the intermediates.”
“Copy. That’ll improve with temperature.”

“We’re P11 Kimi keep pushing for the last lap.”
Raikkonen: “Yeah it doesn’t help I’m doing the best I can.”

The rain returned during Q2.

Massa: “I have no idea, man, I have no grip on these tyres.”

To Stroll: “OK that’s good, still no threat from behind, plus five to Hulkenberg. Possible yellow ahead.”

Hamilton: “Keep the tyre temps up?”
“Don’t worry, you have two new sets for the next session.”

Vandoorne: “I nearly spun in the opening of the timed lap.”
“Copy we saw that. Sector one still OK.”

“If we boxed this lap Max we’d have four laps on that inter. For the moment your are still P2.”
Verstappen: “What are the Mercedes car doing?”
“Hamilton struggled on his second lap, he did go purple in sector one. Bottas did a 39.5. It’s not clear-cut.”

“So we could try the same thing Max, i.e. try starting this lap. If we abort we’ll have two timed laps.”
Verstappen: “Yeah that’s it then.”
“Correction we’d have three timed laps on the inter. But still be OK.”
Verstappen: “OK let’s do that then if this one doesn’t work. Can I go in the fast mode?”
“Yep reverse on, mode ten. For info Vettel 36.7.”

Raikkonen: “I’m not sure we can improve. I had traffic, a McLaren.”

The Red Bulls ran Hamilton close in the final stage of qualifying but the Ferraris struggled.

To Ricciardo: “For info Mercedes have pitted for extremes. So you made the right choice, good job.”
“OK it is still raining in the pit lane so it may get worse so let’s make the first lap count. You will get a total of six timed laps. At the moment you are alone on the track, no threats. Still right-hand side on the pit straight is driest. Track position is good.”

“Brake balance one click forwards. You are currently P2. You’re good around the lap. We can improve turn four/five. Elsewhere is good.”

Hamilton: “Do I have time to slow down? I can’t see anything.”
“OK Lewis box. We’re going to take one more tyre so fast in lap, keep the pace up, we’ll get this last run in. You are currently P1, two-tenths to Ricciardo P2.

To Verstappen: “So Max we’re going to get one more lap.”

Verstappen: “Where am I losing the time?”
“Most of the time is apex speeds through turn six, seven and Ascari. Perhaps give up a little bit on the entry, focus on your exit through nine, ten and down to Parabolica.”
Verstappen: “Where’s Kimi?”
“He’s four seconds behind. Charge ten.”
Verstappen: “I can’t see him so you’ll have to let me know.”
“He’s three seconds behind. There’s a big gap behind Kimi. Let him through now. OK next car behind Massa, 25 seconds. So just get yourself in clear air, make sure you can see ahead of you, one more lap. Plenty of margin to take the chequered flag.”
Verstappen: “The gap behind?”
“20 seconds. Massa’s at turn eight. Reverse off.”

To Hamilton: Nice work Lewis, pole position mate and you’ve got yourself another record. That was a hectic session but nice job, awesome. Keep the delta negative and you’ll be coming back to the pits.”