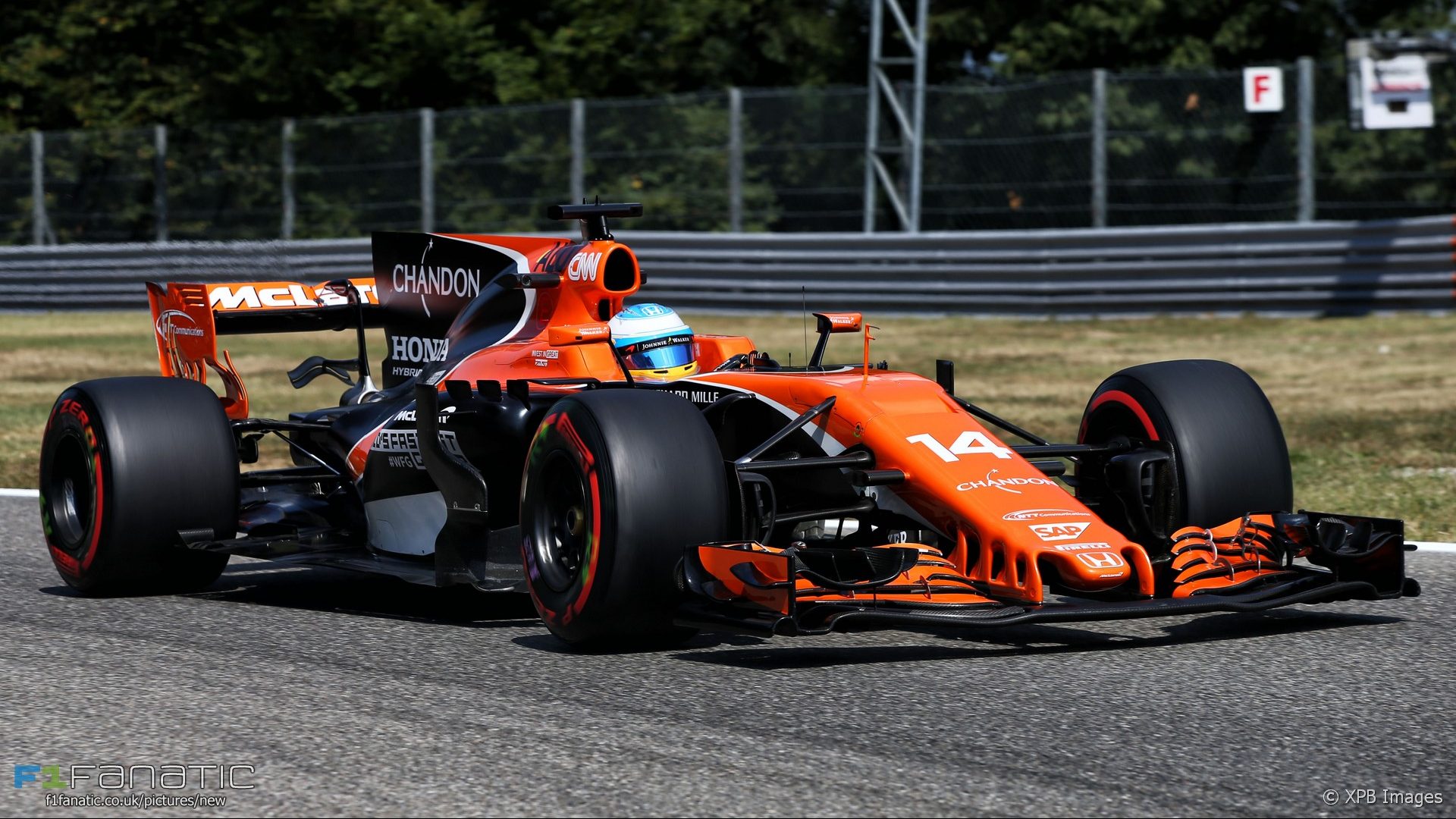 Fernando Alonso took a swipe at Valtteri Bottas after being lapped by the Mercedes driver during the Italian Grand Prix.

The drivers took their places on the grid.

To Ricciardo: “So when you stop at the back of the grid I’ll see you there.”

To Stroll: “OK boxing this lap, through the pit lane, no start.”

“Check the drinks before you get to the grid.”
Stroll: “Yep, drinks are OK.”

To Hamilton: “So one percent. Look for the boys. You can hop out there.”

“Verstappen: “Is it OK to leave the recharge on?”
“It should be OK but be careful with the brake temperatures.”

Hamilton kept his lead at the start while Esteban Ocon took second place off Lance Stroll.

To Stroll: “OK go race, use the overtake when you need.”

To Hamilton: “Ocon 1.5.”
To Ricciardo: “Torque four, front brakes are hot.”
To Bottas: “Pack is a bit on the low side, don’t use overtake for the moment.”

Max Verstappen tangled with Felipe Massa at the chicane.

Verstappen: “What the [censored by FOM] is he doing. He just pushed me off the track.”
“Copy, Max.”

To Stroll: “OK Lance we need to cool the right-hand side of the car for engine temps.”

To Ericsson: “OK Marcus target lap time low 28 if you can, keep pushing.”

Raikkonen: “Do I have damage on the car because I have absolutely no downforce when I turn in?”
“No issues on the data.”

To Ocon: “Try to use Vettel’s DRS if you need it.”
To Ocon: “So that should be the end of the fast cars coming through.”

Alonso: “The upshifts are terrible.”
“OK understood Fernando we are looking into it.”

To Stroll: “Raikkonen behind now has DRS. We’re on plan. Everything is OK.”

Raikkonen: “I think we should try to go on the other tyres as aggressively as we can.”
“I know it’s tough Kimi but we’ve got to get as close as we can to the cars in front to do that.”

Jolyon Palmer and Alonso crossed paths at Spa and the pair clashed again at Monza, Palmer cutting the Della Roggia chicane to keep his rival behind.

Alonso: “Turn four, Palmer cut the chicane.”
“We saw it on the video and we’ve informed the race director.”

Alonso: “Guys I’m sorry but we need to do something.”
“Default zero three.”
Alonso: “And the Palmer thing should be a no-brainer.”

Verstappen: “One of my earpieces is broken.”
“Understood.”

Alonso: “What a joke, the five seconds, what a joke.”

To Palmer: “We need to box the car to retire. We have an issue with the car.”

Ricciardo: “Keep the wing where it is.”

Alonso laughed after Bottas lapped him.

Alonso: “Bottas, ha, what a driver. How much time he lose in the blue flag for not waiting? Amazing. Any gap, we are racing with anyone for the rest of the race?”
“Fernando, Stoffel has retired. We’re racing Sainz ahead, he’s on 21-lap-old primes. Gap is 14 seconds.”

To Ricciardo: “OK mate Raikkonen is on his own, he’s vulnerable again, let’s get him.”

Ricciardo passed Kimi Raikkonen and set off after the other Ferrari.

To Ricciardo: “Nico job mate. Next one up the road is Vettel. Vettel is a little slow, I think you’re going to catch him.”

“Magnussen: “What is he doing, pushing me off the track?”
“We saw it.”
Magnussen: “That was crazy guys.”
“Copy, reporting to Charlie.”
“Magnussen: “Guys I’m serious if that’s allowed, it’s crazy.”
“We understand. Fully covered by television.”
To Ricciardo: “You will catch Vettel on the last lap.”
To Hamilton: “You are not in your Safety Car window.”

To Alonso: “Ricciardo will be lapping us shortly, he’s plus four, he’s chasing Vettel.”

To Hamilton: “Get in there Lewis, get in mate. Just a walk in the park.”

“On turn one, there was no further action from the FIA on that.”
Verstappen: “Honestly I really don’t care any more.”

“P3, Sebastian, well done bravo.”
“Grazie ragazzi. The last 15, 20 laps after I went off something was wrong so that’s why I went up and down on engine.”