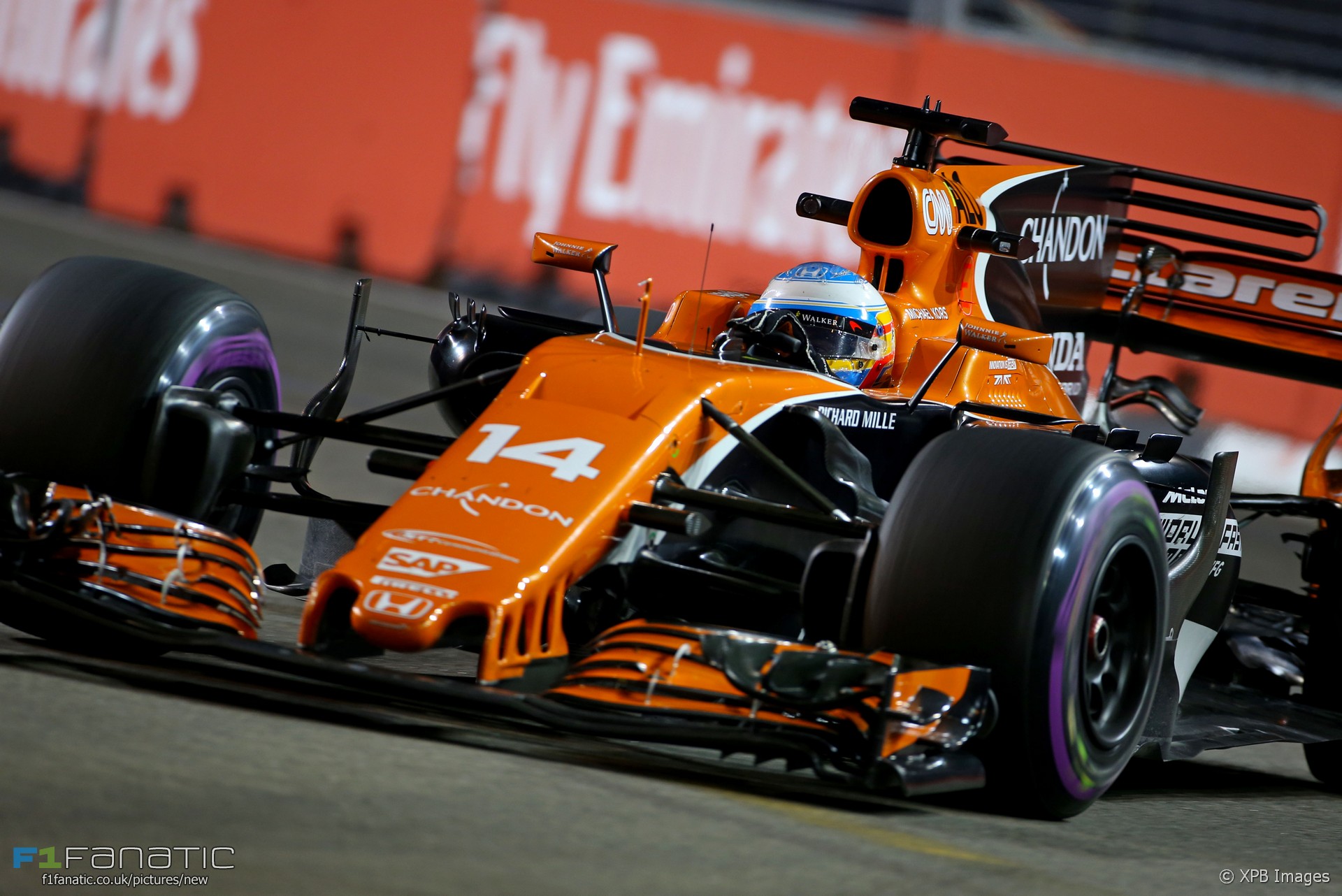 Fernando Alonso aimed another barb at Honda on the radio shortly before McLaren announced their split from the engine manufacturer.

Here’s the highlights of what the drivers had to say during practice.

The track was still drying out from an afternoon thunderstorm when the first session began.

To Hamilton: “You were on target with the start.”

“Low grip at turns one two.”
Hamilton: “Track is still damp in many places.”
“Let us know if it’s too damp to get a run.”

Sean Gelael had his first run in an official F1 practice session with Toro Rosso.

To Gelael: “De-activate DRS 50 metres earlier manually. Do it manually.”

To Massa: “We need an important switch change: Multifunction A flow 13.”

“Comments on balance?”
Palmer: “Understeer on entry, bit of understeer at the last corner, and oversteer on traction, especially turn ten.”

“Are you OK.”
Palmer: “Yeah I lost the brake pedal for a second there.”

“Temperatures are good to keep pushing if you wish.”
Ricciardo: “I’ll do a cool-down.”

Stroll: “I have a problem with the engine.”

To Hamilton: “Lewis we need to take a cool-down lap. Front calipers are too hot. Cool down then box.”

Fernando Alonso took note of how his Renault-powered rivals were doing.

“Fernando we suggest doing an out-lap and a warm-up lap to keep the pack charging. You have Raikkonen plus 11 on a flying lap. Verstappen plus 13 on a flying lap.”
Alonso: “Oh my god. Really?”

“Looks like the pack’s coming up OK so we can do a flying lap in G3 and we’ll save the G1 lap for later.”
Alonso: “It’s OK we do whatever. We need to do more important test than the G3 lap, so it’s OK.”
“OK understood.”

“I would suggest definitely a cool-down lap. Currently you are quickest on a 42.4. Quickest in sectors two and three. Do you want to do another lap, question?”
Ricciardo: “I’ll start it and see.”

“Would you like another attempt?”
Alonso: “No, please no.”
“For info you are currently P7 on the times sheets.”
Alonso: “For info, we could be P1…”

To Bottas: “We think you need to be going more forwards on brake balance in the last sector.”

“Let us know your tag level.”
Hamilton: “I don’t know what this tag level is.”

Bottas: “The rear end is just un-driveable, it’s moving around so much.”
“OK, might be worth trying a cool-down lap.”

Carlos Sainz Jnr went off at turn 18 at the beginning of the session and again at the end.

“All OK with the car, Carlos?”
Sainz: “Yeah give me one second. I went straight, had to reverse.”

Kvyat: “Oh it was a bit [censored by FOM] exit of last corner with Kimi.”
“Yeah it wasn’t nice.”

Lance Stroll had another new track to get to grips with.

To Stroll: “Braking point for ten looks good, come off the brakes earlier and carry the minimum through ten.”

To Stroll: “And then brake slightly later for turn 11.”

Several drivers made contact with Singapore’s unforgiving barriers while others, such as Romain Grosjean, had spins.

Palmer: “I just kissed the wall on the left-hand side.”
“OK. Tyre pressures are looking good.”

Verstappen: “I brushed the wall. Should be OK.”

Vettel: “I brushed the wall exit of ten. Check the car.”

“OK let’s try and put some front temp in.”
Stroll: “I’m doing everything I can.”

Sainz: “Quite of a lot of understeer, just to let you know. Not very good feeling to start with.”
To Sainz: “Understood. if you need a flap adjust we are not shy so we can do a flap adjust in front of the garage.”

To Raikkonen: “Engine temperatures are all fine as We discussed before.”

To Hulkenberg: “OK Nico we’re going to box this lap. We’ve got a small issue. Cool the car on the way in, please.”