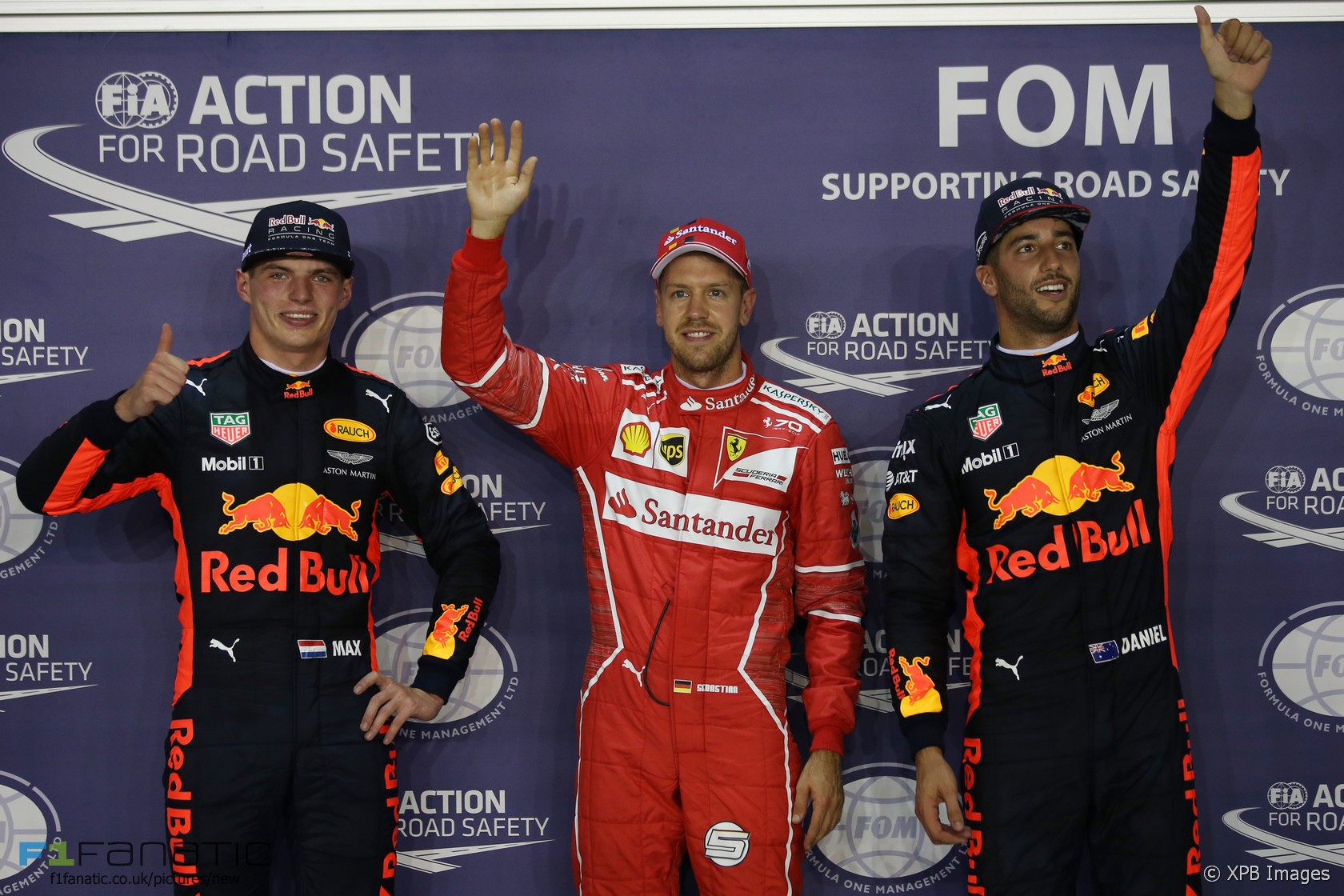 Sebastian Vettel took his third pole of the season in Singapore, beating the Red Bulls of Max Verstappen and Daniel Ricciardo with Lewis Hamilton fifth.

Verstappen produced a stunning first lap but was unable to beat Vettel’s time on his second effort, allowing the Ferrari driver to take his fourth pole around the Marina Bay circuit.

Daniel Ricciardo was only a few hundreds of a second behind his team mate in third, ahead of Kimi Raikkonen. It was a difficult session for Mercedes, with Hamilton fifth and Valtteri Bottas sixth.

With Red Bull having shown strong pace in practice, all eyes were on Max Verstappen and Daniel Ricciardo to see if the team could secure their first pole position of the season.

Oil had been left on the track at turn 20 between practice and qualifying thanks to a support race and drivers were quick to complain about a lack of grip around the entire final sector.

Felipe Massa hit the wall exiting turn 21, causing significant damage to the right-rear of his Williams. Kevin Magnussen also scraped the outside barrier too, but managed to continue apparently unaffected.

It was a tense final few minutes for the Force India pair of Sergio Perez and Esteban Ocon who were approaching the drop zone and were not out on track.

Fortunately for them, they were quick enough to avoid the drop zone as Kevin Magnussen, the two Williams of Massa and Lance Stroll and the Saubers of Pascal Wehrlein and Marcus Ericsson were eliminated from the first round of qualifying.

The second qualifying session was the first opportunity to see how fast the front runners truly were.

Mercedes were the first to set a laptime with Hamilton faster than Valtteri Bottas, but they were both immediately beaten by the Ferraris of Sebastian Vettel and Kimi Raikkonen.

But then it was the turn of the Red Bulls and Max Verstappen quickly proved that Red Bull were a genuine threat by lowering the fastest time of the weekend with a 1’40.332. That would be the quickest time of the session.

Both McLarens of Stoffel Vandoorne and Fernando Alonso made it through to Q3, but the Force Indias of Ocon and Perez were eliminated. Jolyon Palmer only just missed out on Q3, while Daniil Kvyat and Romain Grosjean also failed to make it through.

The final qualifying session began with all signs pointing to it being potentially the closest shoot out for pole for some time.

Kimi Raikkonen was the first to lower the fastest time of the day on a 1’40.069, but then Max Verstappen became the first man ever to break the 1’40 barrier around the Marina Bay circuit with a 1’39.814.

Red Bull’s delight was quickly extinguished as Sebastian Vettel eclipsed Verstappen’s stunning time with an even better effort of his own, taking provisional pole with a 1’39.669.

Mercedes were seemingly unable to challenge their rivals, with Lewis Hamilton over half a second adrift of Vettel and Valtteri Bottas a further half second behind.

On the final effort as time expired, Verstappen was unable to improve his time and Vettel duly improved despite a glancing blow against the wall exiting turn 19 to take pole position by three tenths.

Ricciardo was only just off his team mate in third, but two tenths faster than Raikkonen in fourth. Championship leader Lewis Hamilton will line up fifth on the grid ahead of team mate Valtteri Bottas after Mercedes struggled for pace all afternoon.

Nico Hulkenberg will line up seventh ahead of the two McLarens of Fernando Alonso and Stoffel Vandoorne with Carlos Sainz rounding out the top ten.