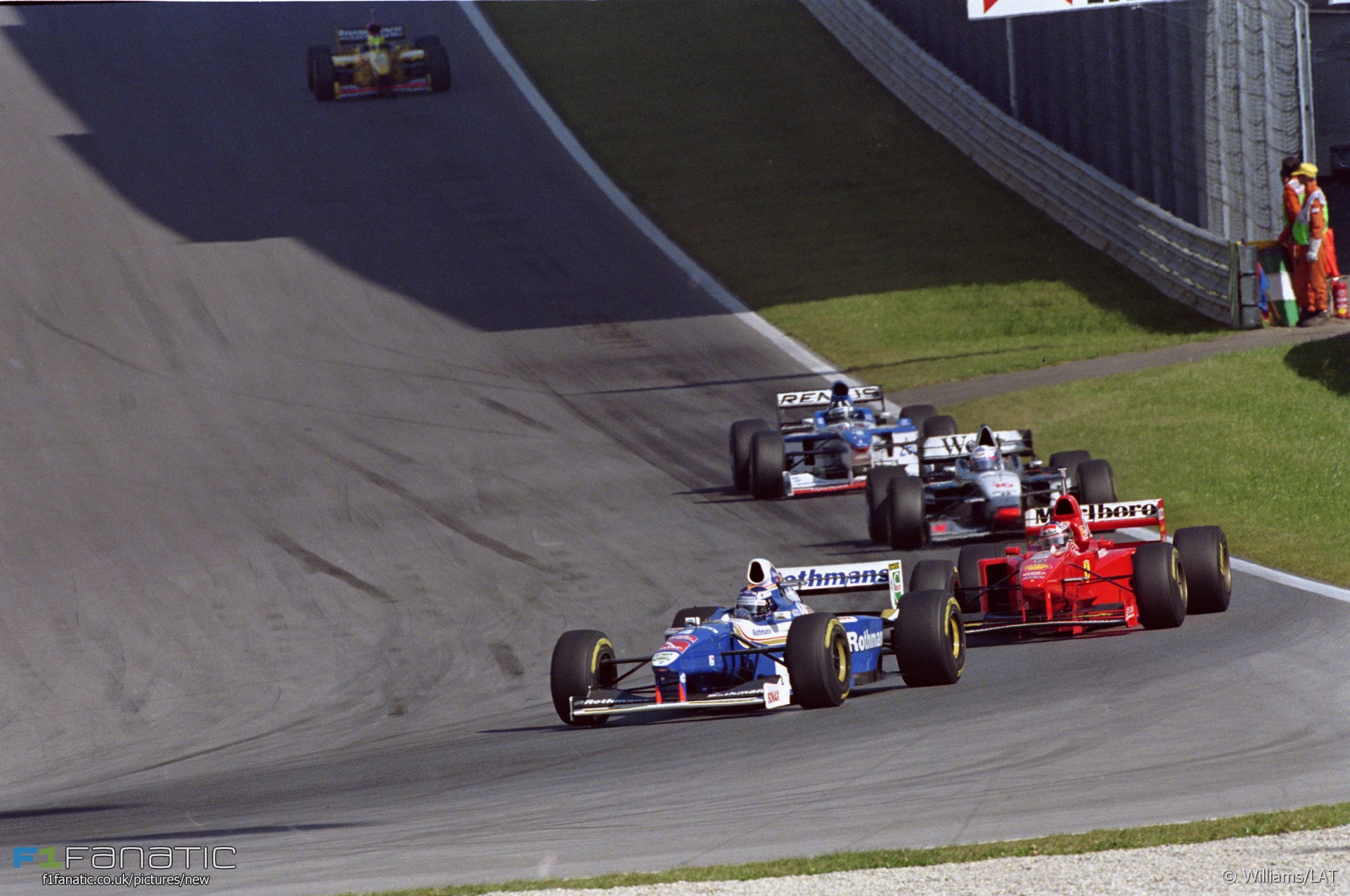 Michael Schumacher’s lead was trimmed to a single point on this day 20 years ago in Austria after the championship leader was handed a ten-second stop-go penalty.

Formula One’s first visit to the reshaped A1-Ring produced a grand prix of surprises: the Bridgestone teams thrived and rookie Jarno Trulli led more than half the race in his Prost. But Jacques Villeneuve took a victory which left the championship thrillingly close with three rounds left to run.

No one was pretending that Austria’s revised and shortened grand prix circuit was a patch on the original Osterreichring, which had last hosted F1 cars ten years previously. “The old circuit was the greatest in the world,” said Gerhard Berger, the only Austrian driver in the race. “But the new one fits to the new generation. Safety standards are completely different now.”

Another driver who had experienced both tracks was Mika Salo, who felt the venue had been dumbed down. “I raced on the old circuit in Formula Ford and I liked it very much,” he remembered. This circuit has a lot of slow corners and anyone can drive through them.”

Title contender Villeneuve, never one to mince words on any subject, said “compared to the old track, it’s really nothing.”

“I think it’s a shame we’re left with this compared to what used to be there,” he added. But the revised track was to prove a boon for his championship hopes.

Hill moves on from Arrows

Damon Hill had left the Italian Grand Prix in Eddie Jordan’s plane where the pair sketched out a deal for the still-reigning world champion to become a Jordan driver in 1998. The move came in the wake of Jordan losing a high court battle with Benetton for the services of Giancarlo Fisichella.

Meanwhile Jean Alesi had confirmed he wouldn’t be returning to Benetton, where relations between him and team boss Flavio Briatore had plunged to new depths. “He was saying terrible things, like [me and Berger] knew the names of the crew on our boats but not of the guys working on our cars,” Alesi complained. “Completely unfair and untrue. In fact, I always thought he never really knew who was working for him.”

Alesi threw his lot in with Sauber for 1998. Another piece of the driver market puzzle fell into place as Arrows hired Salo from Tyrrell to step into the place vacated by Hill.

The new A1-Ring had already held a round of the FIA GT championship and Formula 3000 series before Formula One turned up, yet its new track surface was still bedding in. Drivers were taking several laps to get a quick time out of their tyres.

In the hour-long qualifying session drivers were limited to a maximum of 12 laps. And as lap times were so short, the track was silent for the first 16 minutes as everyone waited for the optimum moment to begin the session.

Did not start: Tarso Marques, Minardi-Hart – Disqualified due to being under the minimum weight limit in qualifying

Having initially been at odds with Williams designer Patrick Head were at odds over his set-up, Villeneuve nabbed pole position with a superb late run. He dislodged Mika Hakkinen by less than a tenth of a second.

The McLarens looked in good shape. Star designer Adrian Newey had arrived a month earlier and the first fruit of his labour was a redesigned front wing which greatly improved the handling of the MP4-12. But David Coulthard could only manage tenth on the grid, eight spots behind his team mate. Newey, meanwhile, was back at the factory working on the team’s 1998 contender.

A late flurry of laps saw Heinz-Harald Frentzen briefly move up to third in the Williams, only to be dislodged by a storming effort from Jarno Trulli. The Prost driver, who had to switch to his spare car after an engine failure early in the session, took third place in what looked set to be his farewell bow.

The young racer had stepped into the place vacated by the injured Olivier Panis three months earlier. But Panis was expected to return at the next race and Trulli’s team mate Shinji Nakano was contracted to stay courtesy of his ties to engine supplier Mugen-Honda.

“There was nothing I could do about the Nakano situation and I was really angry,” Trulli recalled. “I was just so determined that if I was going to be dropped I was going to do thing my own way in my last race. I went my own way on the set-up, the team were excellent and we took third on the grid.”

Nakano’s season hadn’t been without flourishes, notably in Hungary where he hounded the Ferraris. But on this day when the Prost-Mugen-Honda-Bridgestone combination was so potent Trulli put him firmly in the shape, beating him by a full second and 13 grid positions. It was an early demonstration of Trulli’s signature one-lap prowess.

Stewart highlighted their own improvements and Bridgestone’s strong weekend by sweeping the third row, Rubens Barrichello ahead of Jan Magnussen. The former endured an unpleasant Friday practice session for a bizarre reason: he had mixed up his contact lens cleaning products.

“I hadn’t taken my [usual] solution to the track and the solution I used was the wrong one,” he explained. “Suddenly the pupils of my eyes swelled up, this big, and Friday morning was quite scary after that. Fortunately, after ten laps my eyes got better. It took six hours before the pupils came back to normal size.”

Hill came next, meaning Bridgestone had more cars than Goodyear in the top seven. He was followed by the two Ferraris, Eddie Irvine unusually ahead of Schumacher.

Johnny Herbert had to settle for 12th after a late spin. Alesi was the best of the Benettons in 15th, while Berger could only manage a dismal 18th at home.

This was at least better than Tarso Marques fared. His Minardi was found to be 3kg below the minimum weight limit in qualifying which meant he was excluded from competing in the race. Marques claimed the discrepancy arose because he had lost that much since he was last officially weighed.

The title contenders began the race with eight cars between them. But by the end of the first lap Villeneuve had just two cars separating him from his chief rival.

Hakkinen made a great start from second place to claim the lead. But his Mercedes engine failed to complete even one of the 71 scheduled laps. The McLaren stopped at the exit of the final corner, and the race had its third different leader within the first lap.

This, sensationally, was Trulli’s Prost. And not only did he take the lead but he proceeded to pull away, drawing almost ten seconds clear of second-placed Barrichello over the opening 22 laps.

Villeneuve was stuck behind the Stewart and initially had to fight off the attention of Magnussen in the other car before setting his sights on the one ahead of him. But Stewart couldn’t make their tyres last long enough to pit just once: rapid degradation forced them to make two stops. Making matters worse, both drivers emerged from their first stops into traffic.

Villeneuve passed Barrichello into turn three before the Stewart pitted. He, like most Goodyear runners, had opted for their harder tyre compound. The Williams then began to reduce Trulli’s lead by more than a second per lap at times and ran longer than the Prost driver, whose lead was down to 7.4 seconds when he made his first and only pit stop on lap 37.

Here Trulli’s race began to go awry. The Prost team failed to get enough fuel in his car, meaning he had to save fuel over the remainder of the race to be sure of reaching the chequered flag.

While Trulli was returning to the track Alesi and Irvine were disputing the same piece of it at turn two. The result was a spectacular collision which flicked the Benetton over the Ferrari and put both drivers out. For once it was hard to fault Irvine’s driving in another incident with a rival, but Alesi was incensed. “If I hadn’t known that it would cost me ten thousand dollars I would have put my fist in his face,” he growled.

Adding to Benetton’s misery, Berger had started from the pit lane after seeing a warning light during the formation lap. He spun twice during the race and came home a lapped tenth.

Irvine’s retirement caused trouble for the other Ferrari. Having been stuck to Frentzen’s tail for laps, Schumacher completed a pass on the Williams while the yellow flags were still being waved at the crash scene. He took the lead of the race when Villeneuve pitted but still had his own stop to make. Then the stewards ruled he would have to make another to serve a ten-second penalty for his infringement.

“Unfortunately I did not see these yellow flags,” Schumacher explained afterwards. “I have since watched the incident [on] my onboard camera and at the point where the yellow flag was showing I actually could not see it because I was already right next to Heinz Harald, and Gerhard Berger’s was directly in front of me. That stopped my view of the flags.”

“At that moment I wasn’t able to look to the inside, where there was another yellow flag post, because our wheels were fairly close. Even when I saw Alesi in the gravel I didn’t even realise I had done anything wrong. But then I suddenly got a message on the radio which meant that I would have to come in.”

After taking his penalty Schumacher was down to ninth with 20 laps remaining. He moved one place closer to the front when Trulli’s superb drive came to an early end when he suffered his second engine failure in as many days. Incredibly, team mate Nakano’s car had also broken down seconds earlier.

Trulli’s demise meant Villeneuve was now leading from Coulthard, who as at Monza had profited by running a long first stint. Frentzen ascended to third followed by the two Jordans. The younger Schumacher was leading future team mate Hill who was the top Bridgestone runner ahead of Barrichello.

But the Stewart driver lost his grip on what could have been the team’s second points finish when Schumacher loomed in his mirrors. He ran wide at the penultimate corner and wrecked his suspension. That handed seventh place to the Ferrari.

Schumacher now had the chance of taking a single point – and holding on to a slender championship lead – if he could pass Hill. His former championship rival might have been expected to offer stern resistance, but Hill left the door open at turn two on the penultimate lap. Schumacher, who later said he had “nothing to lose” in the moment, didn’t think twice about storming through. The Arrows driver even putting a wheel off-track as he obligingly made way.

But for that penultimate lap exchange of positions, this had been a perfect day for Villeneuve. Schumacher had held the championship lead since June, but heading into the final races Ferrari were on the back foot and Villeneuve’s championship bid was looking ever more threatening.