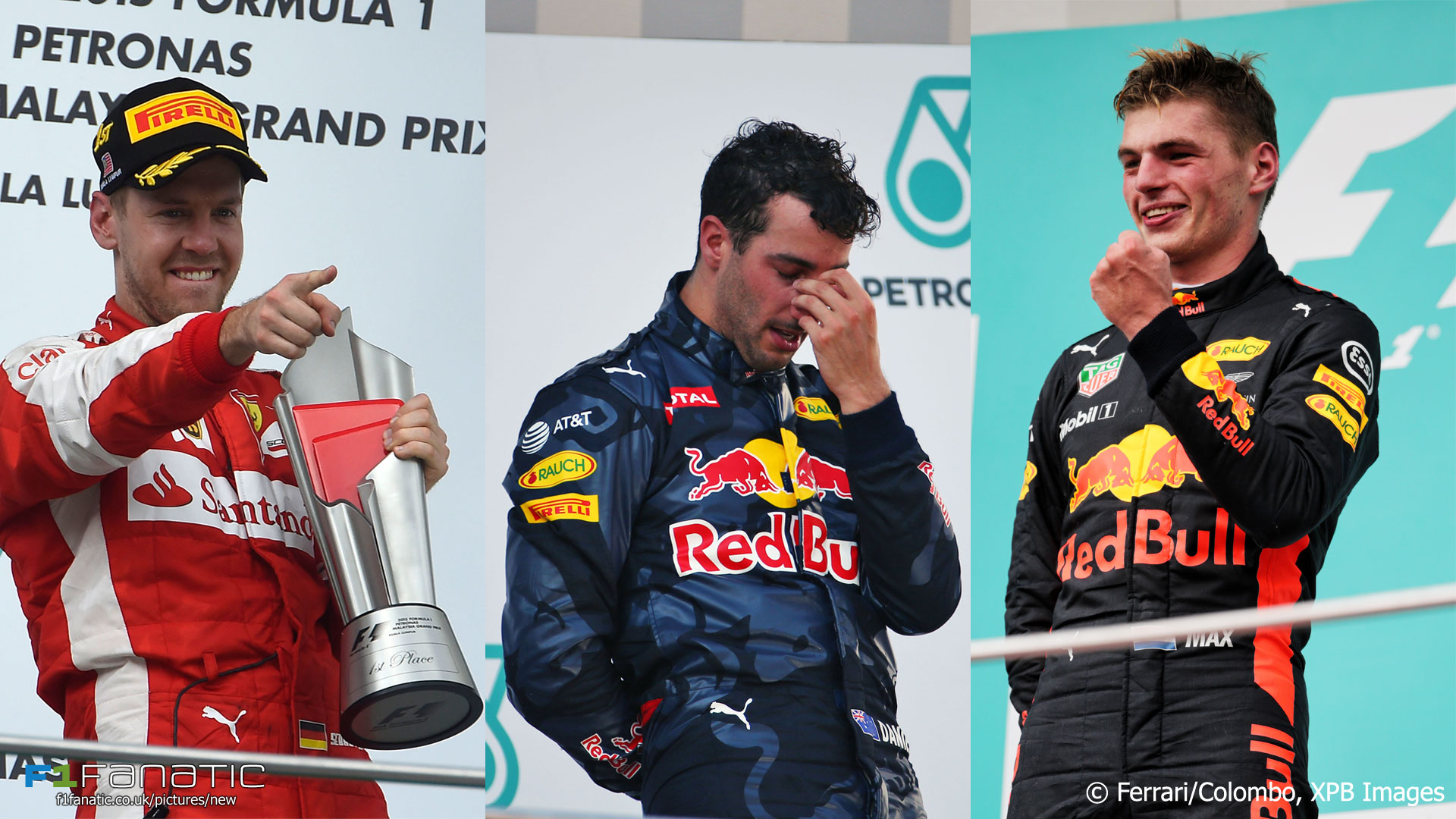 Max Verstappen took the second victory of his Formula One career on the day after his 20th birthday. He is the 75th driver to win more than one race, joining Valtteri Bottas who took his second win in Austria.

For the time being at least, Verstappen is among a rare group of drivers who’ve won more than one race despite never having started from pole position. That list is topped by Eddie Irvine, who never started from pole position but won four races. Irvine scored his final win in the first Malaysian Grand Prix in 1999; Verstappen’s victory yesterday will be the last in Malaysia for now.

The other drivers who won multiple races without starting from pole position are Bruce McLaren (four), Peter Collins and Johnny Herbert (three each), Pedro Rodriguez and Maurice Trintignant (two each). But it’s hard to imagine Verstappen will never start a race from pole position.

Verstappen’s team mate Daniel Ricciardo won three races before taking his first pole position in Monaco last year. And Michael Schumacher made it to five wins before his first pole in the 1994 Monaco Grand Prix.

Lewis Hamilton took his ninth pole position of the season which means he has won the Pole Position Trophy for 2017. It’s the third year in a row he’s claimed the award, which was introduced in 2014 and first won by Nico Rosberg. Had the trophy been awarded since the beginning of the world championship Hamilton would also have won it in 2008 and 2012, and shared it with other drivers in 2007 (Felipe Massa) and 2009 (Sebastian Vettel and Jenson Button).

Hamilton took his fourth consecutive pole position in Malaysia and equalled Schumacher’s record of five at the Sepang circuit. It was the 70th pole position of his career. He took two-and-a-half seconds off the track record for Sepang but fell short of breaking the 90-second lap time barrier by 0.077 seconds.

Kimi Raikkonen missed out on pole position by 0.045s, which is the sixth time this year pole has been decided by less than a tenth of a second. Unfortunately he didn’t get to start from that position due to his pre-race power unit failure. He has therefore failed to complete a lap in either of the last two races. The last driver to suffer this was Felipe Massa, who didn’t get beyond lap one at Silverstone and Hockenheim in 2014.

With Vettel starting from the back of the grid due to technical problems in qualifying, Red Bull seized the opportunity to get both their cars home on the podium for the first time this year. The 2017 season will end with Sepang being the only track where Mercedes have failed to win in the last three years.

This is unfortunate for Mercedes given that their title sponsor Petronas is Malaysian. At least they won’t have to worry about it next year as the race isn’t on the 2018 F1 calendar.

Hamilton did finish second, however, which is his 20th consecutive points-scoring finish. The all-time record of 27 is held by Raikkonen.

Verstappen’s race-winning time of one hour, 30 minutes and 1.29 seconds is the shortest ever seen for a full-length Malaysian Grand Prix. The only shorter race was the 2009 running which lasted 55 minutes as it was reduced in distance from 56 laps to 31 due to heavy rain and poor visibility.

From 20th on the grid Vettel made light work of the field as he climbed to finish in fourth place, setting a new lap record on the way. He made up 16 places which is the most of any driver this year. Team mate Raikkonen hasn’t finished more than one place higher than his starting position all season.

Malaysia’s last race was the first for Pierre Gasly as Daniil Kvyat suffered a mid-season ousting for the second year in a row. Gasly had to endure the sapping Sepang heat without a drink, much as Kvyat had to at Singapore in 2014. And in an unusual parallel, Kvyat’s demotion was immediately followed by a win for Verstappen, just as was the case in Spain last year.

Have you spotted any other interesting stats and facts from the Malaysian Grand Prix? Share them in the comments.