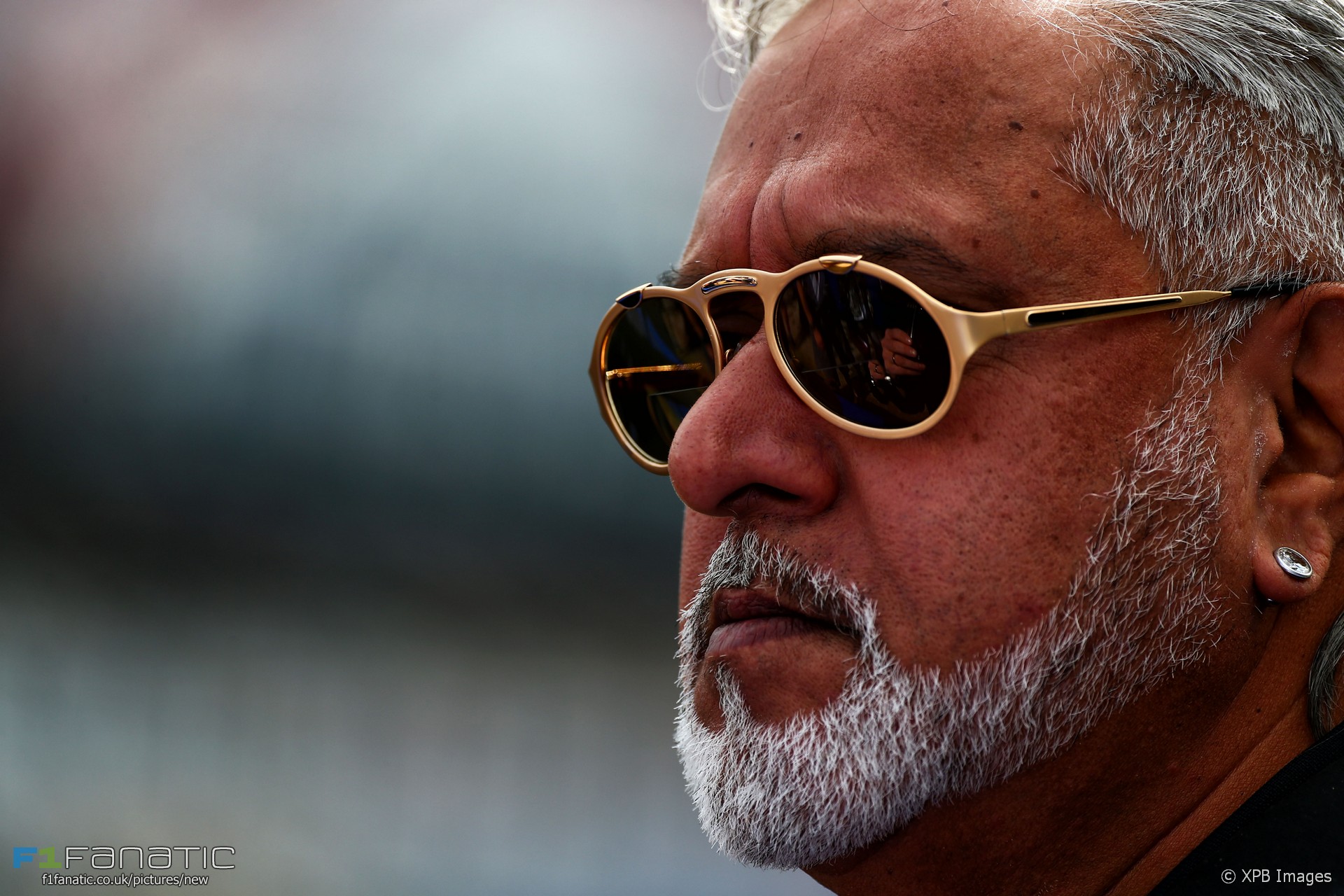 In the round-up: Force India co-owner Vijay Mallya, who was arrested in April on a fraud charge and faces an extradition hearing next month, has been arrested for a second time, this time for a charge relating to his F1 team.

"Vijay Mallya, the flamboyant Indian beer and airline tycoon, has been accused in a London court of money laundering, with funds lent to aid his ailing air carrier Kingfisher Airlines allegedly going to his Force India Formula One motor racing team."

"The businessman, who is living in a £11.5m Hertfordshire mansion once owned by the father of F1 driver Lewis Hamilton, is due back in court on 20 November and an extradition hearing is due to start on 4 December."

"The Pole will test the car in the first of a two-day test at the Hungarian circuit and his place will be taken on the second day by the team’s current third driver di Resta."

"The device was flown back to Ferrari's factory in Italy for inspection, and a spokesman said it 'seems OK'."

"It's true we wanted to try something with Robert (Kubica), and were thinking about next year. But try and see it from Renault's perspective."

"It shows that the works that we did since our poor start in Melbourne paid off, and the development goes in the right direction. Chassis-wise, for sure we are the best now."

"It would certainly be better for the promoter if the races were further apart on the calendar. Mexico with Canada. We’d be with Brazil."

Christian Horner: "We have some things to prove to Max that we are still the best team for him."

"Obviously if Honda starts to win in 2018 and we're not, we will look silly."

"We pay to come here, we pay a fee to come here, everybody has to pay. We discussed it and they were very professional about it. They have insurance, let's see what we can do."

Gasly would give up title shot for F1 chance (Racer)

"After winning GP2, if I can win Super Formula, that would be great. But if I can race in Austin, that will be even more amazing."

"Spare a thought for the Sauber engineering team after their network went down taking all the timing with it. They were having to work with stopwatches, TV pictures and a lap chart – the old fashioned way!"

"Porsche ambassador Mark Webber keeps telling me it will never happen, and one must assume that he is right, despite the fact that a man from Porsche is visiting teams and talking the talk."

"Formula One is opening an office in NY, the series confirmed to SBD Global, marking its first permanent bureau established in the US under new owner Liberty Media."

And the first time I did your pit board. It was so hot I was kind of glad when your Cosworth went pop and I could retreat back to the garage

Getting so tough to watch F1 in the UK without paying an arm and a leg to SKY. I don’t understand why they don’t stream direct if I pay.

I’m slowly stopping watching F1 to be honest as much as I love it. Formula-E is on YouTube so been watching that more instead.

What should the FIA do in response to complaints from teams about Marcin Budkowski joining one of their rivals shortly after having access to sensitive data about their cars?

Budkowski must not be permitted to join Renault next year.

High ranking persons changing teams take a one-year sabbatical. How much more so for someone’s who’s been privy to the innermost technical insights into all the teams?

There will be a credibility crisis for the entire governing body. Can you imagine the implications if the teams suddenly can’t trust the motivations of FIA’s technical personnel? Row after row after row as teams just try different things, other teams protesting, arbitration, etc…
@Thepostalserviceisbroke

62 comments on “Mallya arrested over funds used on Force India”