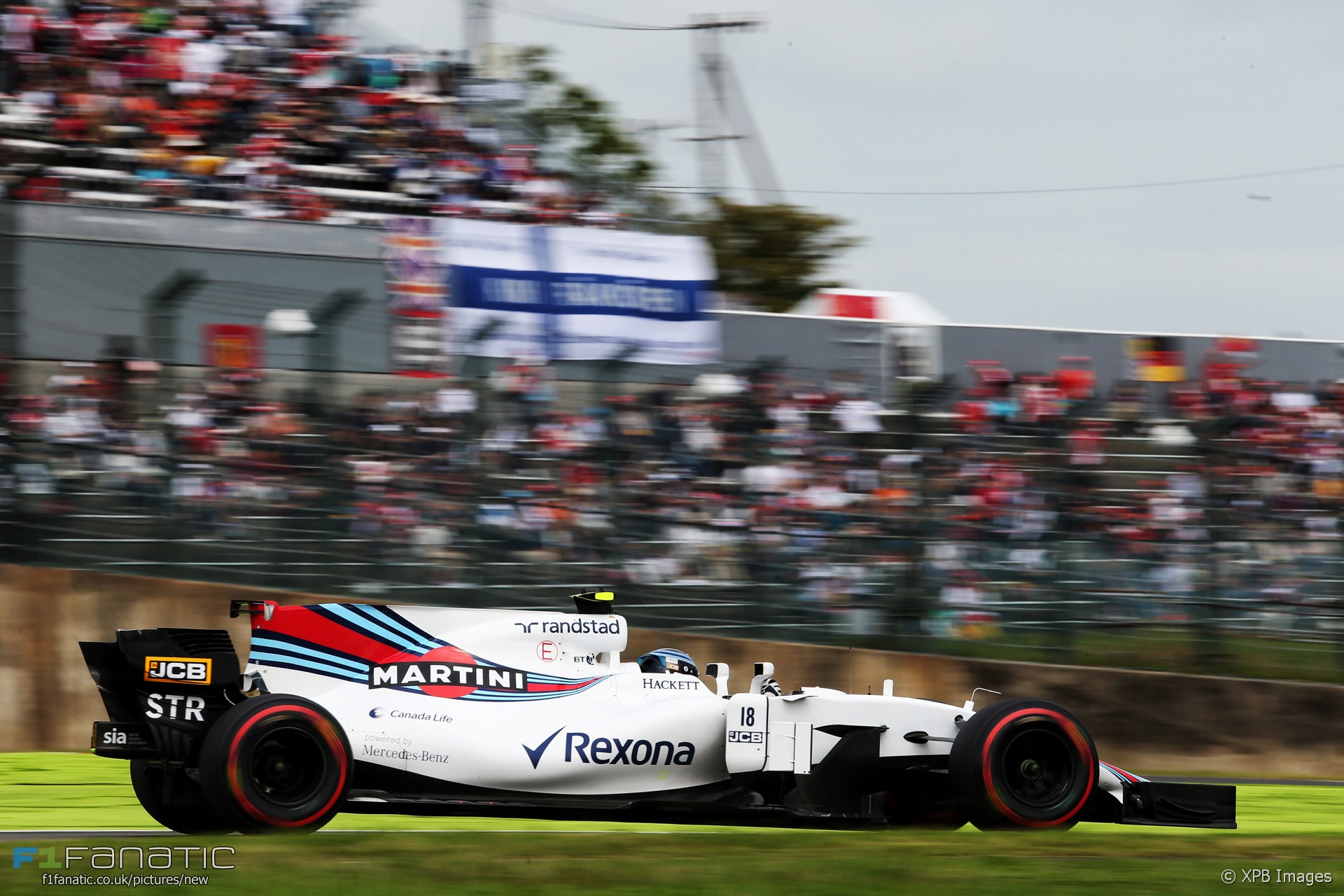 Traffic was a problem for many drivers during qualifying at Suzuka. Lance Stroll was particularly unhappy, saying he got held up on both his timed efforts during Q1.

Here’s what he and several of the other drivers reported on the radios.

Final practice was busy to begin with but crashes for Valtteri Bottas and Kimi Raikkonen brought the red flags out twice.

Vettel: “The track is dry everywhere.”

Gasly: “The rear is very unstable.”

To Verstappen: “B bal [brake blance] four and mode ten to start the lap.”

Gasly: “The rear is really strange, early snap and quite unpredictable as well.”

“Just give a damage report.”
Bottas: “Not sure about the front-right but the rear-right is damaged.”

Hulkenberg: “Quite a lot of oscillation.”
“Understood Nico, we see it.”

To Verstappen: “Temperatures are on the low side, Max. I’d suggest you push.”

Vandoorne: “Tyres already quite a bit gone.”
“OK let’s open one more lap and if the tyres are gone you can abandon the lap.”

Wehrlein: “The rear’s not the same as yesterday.”

Ericsson: “We need to go down on front wing, too much oversteer.”
“OK, one step?”
Ericsson: “Yeah.”

Gasly: “Car was better, still a bit understeery in the first sector, in the high speed at the apex.”

The day’s running had begun on a track which had just finished drying out but by the start of qualifying some oil had been dropped, making the surface slippery in places.

Hamilton: “Some oil dropped down on the track.”
“Copy that Lewis.”

To Hamilton: “You’ve got Ericsson car behind, good gap behind him. You can let him through, get off some of that cement.”

Stroll: “Someone blocked me at the last corner, a Toro Rosso.”
“Yeah that’s Gasly.”

Ocon: “Balance is a bit too much oversteer.”
“Copy that. High or low speed?”
Ocon: “High.”

“Grosjean: “What the hell was that idiot..”
“Yeah we’re looking at that now.”

It looks like we had a lot more touching which I’m sure you felt.”
Grosjean: “Yep, massive touching.”

Perez: “Man what did Gasly did on the last lap, he just drive into me, no respect at all there.”

Grosjean: “OK something wrong happened on the car. Big shunt.”
“Are you OK?”
Grosjean: “[Censored by FOM] yeah I’m OK.”

To Ericsson: “We start P16 tomorrow so it’s not bad at all.”

Following his crash in final practice, Kimi Raikkonen had a grid penalty and so decided to start the race on soft tyres. Ferrari told him they had the pace on the harder rubber in Q2 to make it work.

“You don’t need to change anything.”
Magnussen: “Well I already did. Do you want me to change back?”
“Stay as your last run.”

“OK Nico I’m afraid we are P12.”
Hulkenberg: You see how oversteery sector one was? More and more oversteer.”

However Raikkonen still wasn’t entirely happy with his car as Q3 began.

Raikkonen: “I lost the rear. Car is loose at the end.”
“Understood.”
Raikkonen: “Are we coming in?”
“Yep we don’t have the fuel.”

One comment on ““Someone blocked me”: Japanese GP qualifying radio highlights”