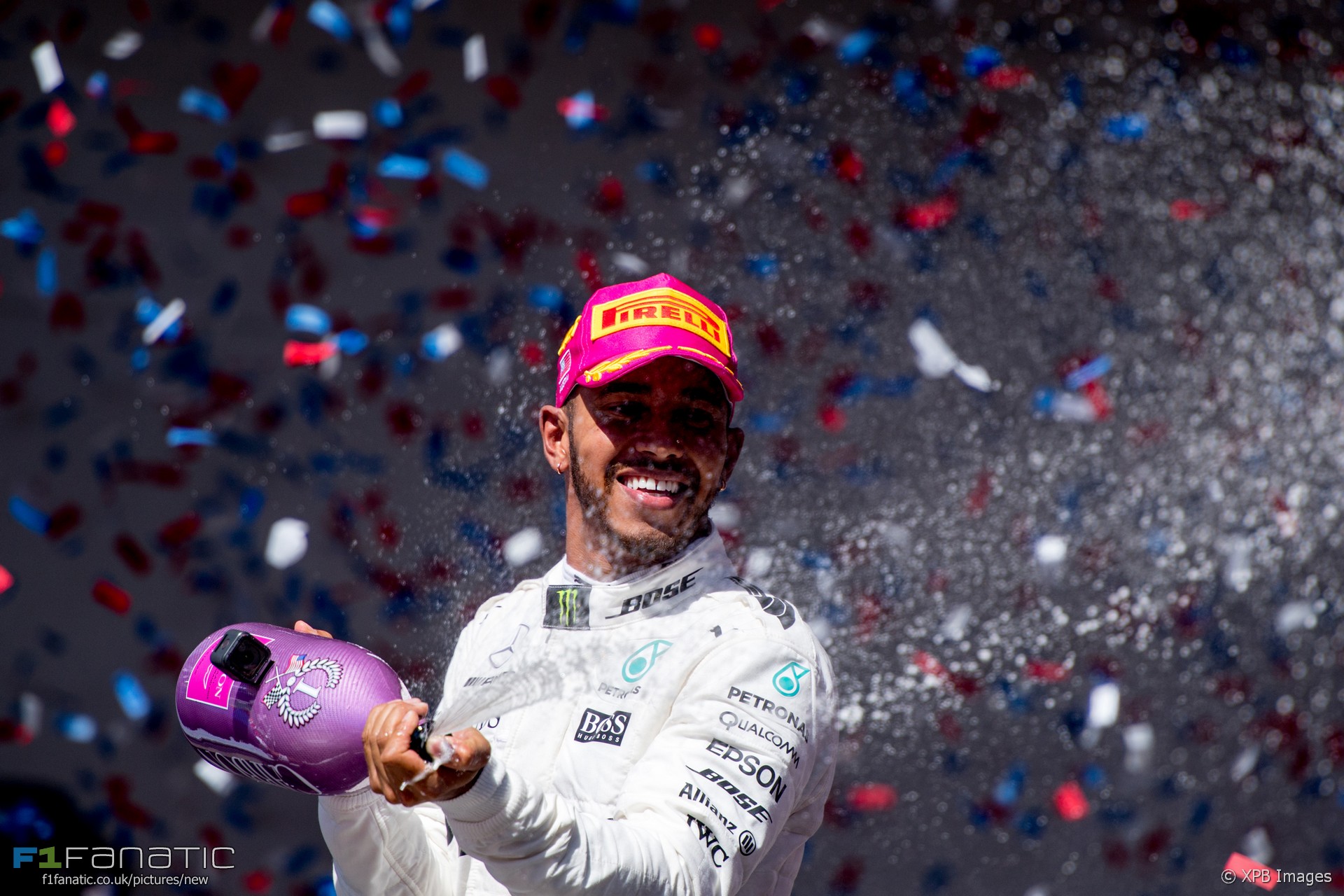 The Circuit of the Americas was built five years ago. It might as well have been created for Lewis Hamilton, who this year took his fifth win in six appearances at the track.

The only other driver to win here was Sebastian Vettel back in 2013 when he had the all-conquering Red Bull RB9 at his disposal. This time his Ferrari SF70H wasn’t quite up to the task, though in the beginning it seemed it might be.

Vettel puts up a fight

For this, the home race of F1’s new owners, the pre-race festivities were dialled up to 11. The Indianapolis 500-aping driver introductions dragged on a bit, but were fine enough as a one-off concession to the local audience. FOM also brought in Olympic champion Usain Bolt to send the drivers on their way.

Yet somehow back-of-the-grid team Sauber managed to trump the sport’s bosses by bringing the 42nd president of the United States, Bill Clinton. Some 56 laps later he returned to hand the race winners’ trophy to Hamilton.

This had seemed the likeliest outcome before the race began. That changed when Vettel, despite starting from second on the grid where the grip is not as good, fired his Ferrari down the inside of Hamilton at turn one. He made the merest of jinks in the Mercedes driver’s direction, discouraging Hamilton from following too closely, and was on his way.

Valtteri Bottas and Daniel Ricciardo followed them into COTA’s tortuous opening sector for the first time. Behind them Kimi Raikkonen lost fifth place to a daring Esteban Ocon, though once the DRS zones were activated the Ferrari driver was easily past again.

Vettel, however, could not drop Hamilton. The Mercedes driver reckoned his rival was leaning on his tyres too hard in the quicker corners. Vettel, who showed no interest in backing Hamilton into the pack in the hope of improving his championship chances, said he simply didn’t have the speed in the car to get away.

And so it proved. On lap six Hamilton drew up on Vettel in the DRS zone and, despite a late squeeze from his rival, was back at the front of the field. This must have been a crushing disappointment for the Ferrari driver, and his face told as much once the race was over.

The front runners had started on ultra-softs. As usual Pirelli had talked up the two-stopping possibilities and as usual most teams felt one-stopping was the way to go, the better to keep clear of traffic.

Behind Vettel, Bottas had to work hard to keep Ricciardo behind. The Red Bull driver attempted a couple of his trademark, staggeringly late braking attempts at turn one, but to no avail. This delayed the pair of them and helped Raikkonen stay in touch, until Ricciardo dived for the pits on lap 12, his tyres wilting.

He had just picked of Carlos Sainz Jnr’s Renault and was setting off in pursuit of the front runners when his power unit cried enough. That was it for Ricciardo’s hopes of a tenth podium.

But Red Bull still had one car in the fight. Max Verstappen had started from 16th due to a power unit penalty yet glided past the midfielders with ease. By lap ten he was up to sixth with only his ‘class rivals’ ahead of him.

Verstappen had started on the super-soft tyres and took the opportunity to lead the race as the others pitted. He was ahead for just two laps before Hamilton came back past, the Mercedes driver having had a brief scare after his pit stop.

He had been far enough ahead of Vettel not to worry about the Ferrari driver getting the benefit of the undercut. Instead Mercedes wanted to keep Hamilton out, shortening his second stint. They almost took it too far – he pitted four laps after Vettel and only just got back on track ahead of the Ferrari driver.

Vettel’s fading title hopes rested on getting him in front of Hamilton. With the Mercedes driver looking comfortable on his one-stopper, Vettel began asking the team about the wisdom of switching to ‘plan B’. Soon afterwards they made the call and Vettel pitted for another set of tyres – a used set of super-softs.

It cost him two places, though one of those was to his team mate, and so could be recovered without difficulty. First Vettel had to pass Bottas, however, and there was an added complication: Verstappen had also pitted again and he had the benefit of fresh super-softs.

As Vettel closed on the second Mercedes, Verstappen closed on him. Vettel had to act quickly and arriving at turn one he did, inserting his car between Bottas and Stoffel Vandoorne’s lapped McLaren. Job done, Ferrari swiftly alerted Raikkonen who let Vettel by.

But Verstappen kept on coming. With five laps to go he picked off Bottas, and now he had a podium finish in his crosshairs. On the final lap, five corners from the finish, he daringly tried to get up the inside of Raikkonen in the seriously quick, three-part turns 16, 17 and 18.

Raikkonen, who let said he wasn’t aware of where Verstappen was, left him little room to play with. Verstappen strayed across the kerb at turn 17 – a point on the track cars seldom stray – and completed the move.

The stewards’ decision came swiftly. The cheering for Verstappen’s daring pass and remarkable climb to the podium from the eighth row of the grid had barely subsided when the notice was given of the five-second time penalty. After the hype-packed build-up to the race and the genuine excitement it delivered, this soured an otherwise fine demonstration of Formula One racing.

Esteban Ocon rebounded from his sickness during qualifying to claim the ‘best of the rest’ spot in sixth. he had to keep Sainz at arm’s length to do it, the new Renault driver enjoying a superb debut, passing Sergio Perez for seventh.

How Sainz measures up against Nico Hulkenberg remains a mystery, however, as Renault’s season-long driver capped a miserable weekend by retiring early on when his oil pressure dropped.

Felipe Massa was another driver who ran a long first stint on his way to ninth. Daniil Kvyat claimed the final point and some vindication on his return to Toro Rosso. His new team mate Brendon Hartley was a satisfied 13th, though his first standing start for six years had, unsurprisingly, not been one of his best.

They were separated by Lance Stroll and Stoffel Vandoorne, the latter in the sole remaining McLaren. His team mate Fernando Alonso retired with yet another Honda power unit problem having got up to seventh at the start.

Kevin Magnussen followed the rest home after tangling with both Sauber drivers. Marcus Ericsson received a penalty for the latter incident.

Despite Bottas falling to fifth late on, Mercedes bagged enough points to lock up the constructors’ championship for a fourth year running. The drivers’ title is now almost certain to go Hamilton’s way.

The race was emblematic of how the championship has swung in Hamilton’s favour since the summer break. Vettel and Ferrari seem to have finally run out of answers to the ever-improving pace of their rivals.

Hamilton is on the peak of his form. Memories of how he lost the championship ten years ago will forbid him from taking anything for granted. But it would now take an even greater misfortune than his 2007 title defeat to keep him from becoming a four-times champion.